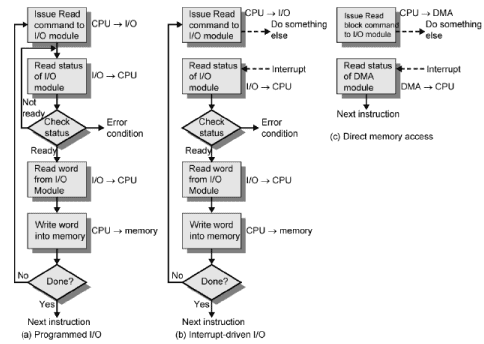 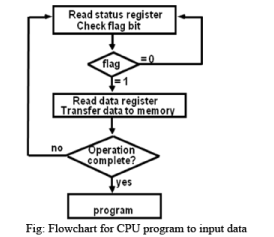 Polling, or polled operation, in computer science, refers to actively sampling the status of an external device by a client program as a synchronous activity. Polling is most often used in terms of input/output (I/O), and is also referred to as polled I/O or software driven I/O.

The problem with programmed I/O is that the processor has to wait a long time for the I/O module of concern to be ready for either reception or transmission of data. The processor, while waiting, must repeatedly interrogate the status of the I/O module. As a result, the level of the performance of the entire system is severely degraded. An alternative is for the processor to issue an I/O command to a module and then go on to do some other useful work. The I/O module will then interrupt the processor to request service when it is ready to exchange data with processor. The processor then executes the data transfer, and then resumes its former processing. The interrupt can be initiated either by software or by hardware. 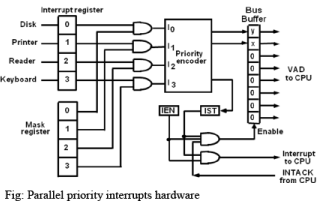 The transfer of data between the peripheral and memory without the interaction of CPU and letting the peripheral device manage the memory bus directly is termed as Direct Memory Access (DMA).

The two control signals Bus Request and Bus Grant are used to fascinate the DMA transfer. The bus request input is used by the DMA controller to request the CPU for the control of the buses. When BR signal is high, the CPU terminates the execution of the current instructions and then places the address, data, read and write lines to the high impedance state and sends the bus grant signal. The DMA controller now takes the control of the buses and transfers the data directly between memory and I/O without processor interaction. When the transfer is completed, the bus request signal is made low by DMA. In response to which CPU disables the bus grant and again CPU takes the control of address, data, read and write lines.

The transfer of data between the memory and I/O of course facilitates in two ways which are DMA Burst and Cycle Stealing.

DMA Burst:The block of data consisting a number of memory words is transferred at a time.Cycle Stealing: DMA transfers one data word at a time after which it must return control of the buses to the CPU.

DMA ControllerThe DMA controller communicates with the CPU through the data bus and control lines. DMA select signal is used for selecting the controller, the register select is for selecting the register. When the bus grant signal is zero, the CPU communicates through the data bus to read or write into the DMA register. When bus grant is one, the DMA controller takes the control of buses and transfers the data between the memory and I/O. 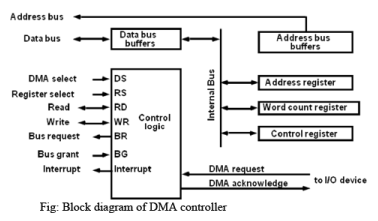 The address register specifies the desired location of the memory which is incremented after each word is transferred to the memory. The word count register holds the number of words to be transferred which is decremented after each transfer until it is zero. When it is zero, it indicates the end of transfer. After which the bus grant signal from CPU is made low and CPU returns to its normal operation. The control register specifies the mode of transfer which is Read or Write. 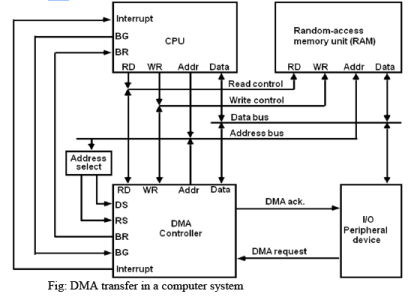 A computer may incorporate one or more external processors and assign them the task of communicating directly with the I/O devices so that no each interface need to communicate with the CPU. An I/O processor (IOP) is a processor with direct memory access capability that communicates with I/O devices. IOP instructions are specifically designed to facilitate I/O transfer. The IOP can perform other processing tasks such as arithmetic logic, branching and code translation.

The memory unit occupies a central position and can communicate with each processor by means of direct memory access. The CPU is responsible for processing data needed in the solution of computational tasks. The IOP provides a path for transferring data between various peripheral devices and memory unit.

In most computer systems, the CPU is the master while the IOP is a slave processor. The CPU initiates the IOP and after which the IOP operates independent of CPU and transfer data between the peripheral and memory. For example, the IOP receives 5 bytes from an input device at the device rate and bit capacity. After which the IOP packs them into one block of 40 bits and transfer them to memory. Similarly the O/P word transfer from memory to IOP is directed from the IOP to the O/P device at the device rate and bit capacity.

CPU – IOP CommunicationThe memory unit acts as a message center where each processor leaves information for the other. The operation of typical IOP is appreciated with the example by which the CPU and IOP communication 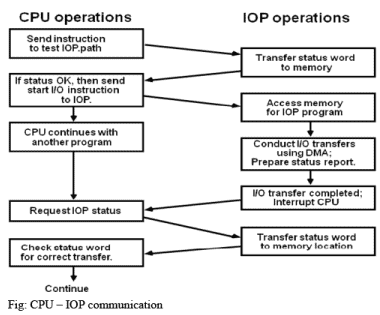