Theorem (Leibnitz’s Rule). If f is defined and continuous on the rectangle R = [a, b; c d], and if

(i) fx(x, y) exists and is continuous on the rectangle R, and

then g is differentiable on [a, b], and

Corollary 1. (General Leibnitz’s rule). If f satisfy the conditions of the above theorem, and if

then g is differentiable on [a, b] and

Definition. An iterated integral is an integral of the form

where θ1or θ2 or both are functions of x or constants.

This means that for each fixed x between a and b, the integral

is evaluated, and then the integral

The other repeated integral

is defined in the same way.

From this we obtain

where, c, is an arbitrary constant.

Theorem : If a function f is bounded and integrable on [a, b], then the function F defined as

is continuous on [a, b], and furthermore, if f is continuous at a point c of [a, b], then F is derivable at c and

Since f is bounded therefore ∃ a number K > 0 such that

Hence the function F is continuous (in fact uniformly) on [a, b].

i.e., continuity of f at any point of [a, b] implies derivability of F at that point.

This theorem is sometimes referred to as the First Fundamental Theorem of Integral Calculus.

Definition : A derivable function F, if it exists such that its derivative F’ is equal to a given function f, is called a primitive of f.

The above theorem shows that a sufficient condition for a function to admit of a primitive is that it is continuous. Thus every continuous function f possesses a primitive F where

Remark : We shall now show, with the help of an example, that continuity of a function is not a necessary condition for the existence of a primitive, in other words, “functions possessing primitives are not necessarily continuous”.

It has a primitive F. where

Theorem : Function f is bounded and integrable on [a, b] and there exists a function F such that F’ = f on [a, b], then

for every choice of points t1 in Δx1..

Since we have freedom in the selection of points tt Δxt, we choose them in a particular way as follows:

By Lagrange’s mean value theorem, we have

It is sometimes referred to as The second Fundamental Theorem of Integral Calculus.

Example 2 : Show that the function [x], where [x] denotes the greatest integer not greater than x, is integrable in [0, 3].

1, 2 and 3 being respectively the points of discontinuity of the three integrals on the right.

Example 3 : f is a non-negative continuous function on [a, b] and

continuity of f at c implies that, there exists a δ > 0 such that

The Calculation of a double integral

Equivalence of a double with repeated integrals.

Theorem. If the double integral

then the repeated integral

exists and is equal to the double integral.

Definite Double Integral : If we have function f(x, y) then

Cor. If a double integral exists, then the two repeated integrals cannot exist without being equal.

exists and is equal to 1/2, but the double integral and the second repeated integral do not exist.

The area is bounded by the curves 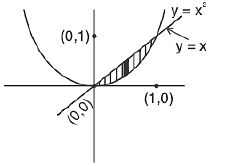 Change of Order of Integration

In calculus, interchange of the order of integration is a methodology that transforms iterated integrals of functions into other.

Theorem : If S is a region of Type I, then

If S is a region of Type II, then

However, sometimes a region is both Type I and Type II. This does not mean that

because the right hand side doesn’t really make any sense. Rather, it means that we can prescribe the region S in two different ways

The preceding theorem applied to this situation simple says

one therefore first has to Fig. out how to parameterize the region of integration

Example 6 : Find the value of

if the domain E integration is the triangle bounded by the straight lines y = x, y = 0 and x = 1.

How to take limit of y and x, we draw a strip parallel to y axis in the fig.

To avoid integration of ey/x with respect to x, we use 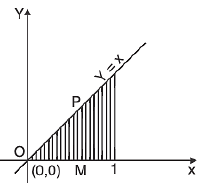 , when E is the domain which lies between two squares of sides 2 and 4, with center at the origin and sides parallel to the axes. 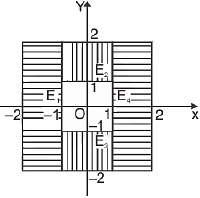 For non-zero values of the function f(x, y), the domain R is divided into two domains A and B, we obtain 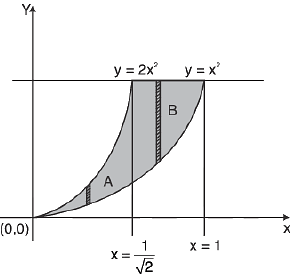 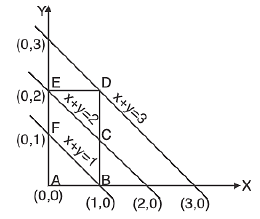 which is known as Jacobian.

Jacobian of transformation form of (x, y) into (r, θ)

Change of Variables in Double Integrals

where the Jacobian J =

Change of Variables in Triple Integrals

map in one-to-one manner, a domain D in cartesian coordinates (x,y,z) onto a domain D’ in the new variables (u,v,w)

where the Jacobian J =

The following two transformations because of their frequent occurrence, deserve special mention

So the integral becomes

It is difficult to evaluate the double integral directly; however a simple change of coordinates reduces the domain of integration into a rectangle with sides parallel to the axis.

by passing on to the polar coordinates.

The integral in question is the double integral

The theorem states that

If x, y, z all positive such that

For this type of integrals, two sets of substitutions are possible, which give an integral with constant limits. We discuss both these here.

which vanishes for u = 1, so that the point (1, 0) in the xy-plane corresponds to the whole line u = 1 in the uv-plane. However, proceeding as in the first method, the new region becomes the square.

dxdy, where E is the region bounded by the co-ordinate  axes and x + y = 1 in the first quadrant.

Let f(x, y, z) be a function of three independent variables x, y and z defined at every point of a three-dimensional region V. Divide the region V into n elementary volumes δV1f δV2, δVn and let (xr, yr, zr) be any point inside the rth sub-division δVr. Find the sum

To extend definition of repeated integrals for triple integrals, consider a function f(x, y, z) and keep x and y constant and integrate with respect to z between limits in general depending upon x and y. This would reduce f(x, y, z) to a function of x and y only. Thus, let

Then in ∅ (x, y) we can keep x constant and integrate with respect to y between limits in general depending upon x this leads to a function of x alone, say

Finally ψ(x) is integrated with respect to x assuming that the limits for x are from a to b.

Use of definite triple integral in finding volume of 3D shape :

If we have a 3D-shape in which two very-very closed point (P, Q) are taken as diagonal of a cuboid.

Then volume of this elementary cuboid inside that 3D shape

here V is the volume of the cube bounded by the coordinate planes and the planes x = y = z = a.

Here a column parallel to z-axis is bounded by the planes z = 0 and z = a.

Hence the given integral 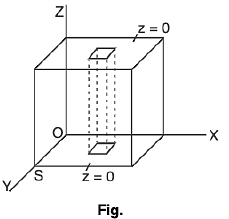 Here the given integral 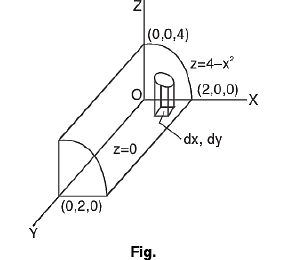 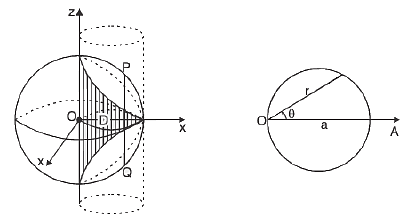 The region is bounded, above and below by the surfaces

Changing to polars, the region D becomes the circle, r = a cosθ

The domain E is bounded above and below by the surface 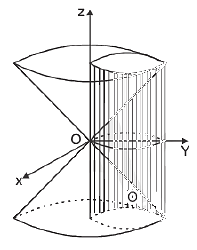 Change of Variables in A Triple Integral

Let f be continuous in a domain E bounded by a surface S in xyz-space.

We suppose that these three functions with values

(i) possess continuous first order partial derivatives at each point of E, and Sr

(iii) the transformation is one-one.

does not change sign at any point of E1, even though it may vanish at some points of S1 It will then be proved that

The given integral is same as

taken throughout the domain

It is easily seen that to describe the whole region.

Definition : The area of the surface

assuming that the functions f, g, h possess continuous first order partial derivatives in D and at no point of D.

Note : Here, we do not propose to derive the expression as given above by basing the derivation on some elementary notion of surface area. Let the definition as given appear very arbitrary, we outline some considerations to call forth reader’s faith in the same.

I. Let the surface be plane. We take

where (u, v) ranges over a domain D in the XY-plane. In fact, the surface coincides with D in the present case.

Thus the definition of surface area as now given agrees with that of areas of plane regions.

We take it as given by

The reader acquainted with the elements of Differential Geometry knows that

are the direction ratios of the normal to the surface at any point (x, y, z) , so that if we suppose δσ to be an element of surface lying on the tangent plane at the point, the projection area δA of δσ on the XY-plane is given by

This suggests, on summation, the truth of (1).

Note. The reader may easily show that

On passing to polars, we have 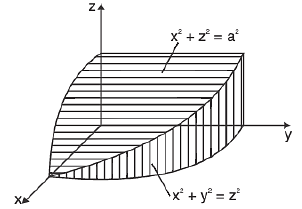 The Fig. shows 1/8th of the desired surface

The equation of the surface has the form

carried throughout a region E in space of three dimensions gives the volume of E.

By Double Integration Let C be the boundary of a region E of the xy-plane and let a cylinder be constructed by lines through the points of C parallel to z-axis. Then the volume of the cylinder enclosed between the surfaces

and can be easily seen. given by the double integral

The limits of z are 0 to

The limits of y are from

Here limits of z are from

Now the equation of the cylinder is

∴ The limits of r are from