Some sources call a graph with horizontal bars a “bar chart” and a graph with vertical bars a “column chart.” Apparently, GMAC is not interested in that distinction, because the OG 13’s section on IR calls graphs with vertical bars “bar charts”; presumably, if the bars were horizontal, GMAC would still call them “bar charts.” A little more is at stake here than pure semantics.  Typically, when the bars are horizontal, each bar represents a completely different item from some overarching category. For example: 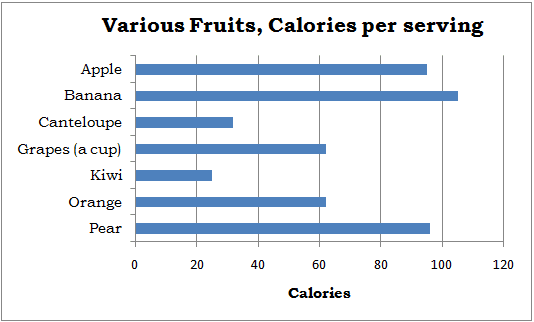 Here, the bars are different fruits. Why these fruits were selected, and not others, is not obvious.  The order here is simply alphabetical, as there is no pre-determined way to put fruits into “order”, whatever that would mean. If there is no inherent order to the categories, and the representative chosen do not exhaust the category, then the data typically would be displayed in horizontal bars, what many sources would call a “bar chart.” If the set has an inherent order to it (days of the weeks, months of the year, etc.) and/or the representative shown constitute all in the category, the data typically would be displayed in vertical bars, what many sources would call a “column chart”, but which GMAC appears to still call a “bar chart.” For example: 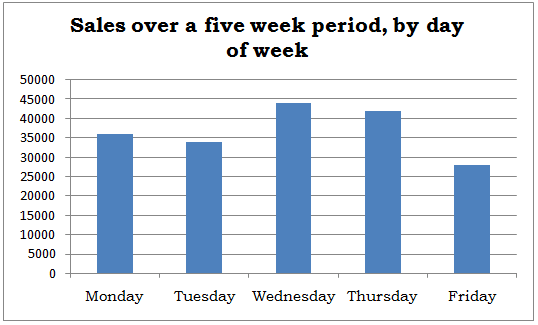 Here, days of the week have a well-defined order, in which they are displayed.  Assuming this business only operates during weekdays, this is also a complete set of all the days on which they do business.  That’s why the vertical columns are used.

This is a more detailed chart of the “sales by day of week” chart given above. This one gives more nuanced information.  Apparently, this company has two divisions, and how each division performs during different days of the week varies considerably.  For example, Division 1 clearly has its best days on Wednesdays, while for Division 2, Mondays and Thursdays appear to be close to tied for best days.  Here, the individual pieces are displayed as segments of a column because we might be interested in knowing either the revenues of either division separately or the total revenues of the company, which equals the sum of the revenues of the two divisions.

Sometimes we care about the sum of the parts, and sometimes we don’t. If, instead of being two divisions of the same company, those same data were interpreted as the revenues of two different companies competing in the same market, then the sum of the revenues would be virtually meaningless.  In this case, the columns or bars are “clustered”, that is to say, displayed side-by-side. For example: 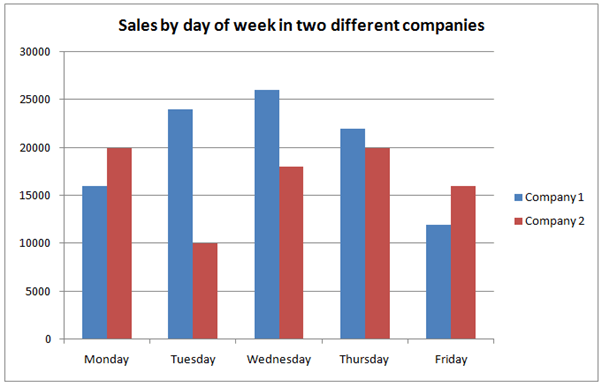 Here, the side-by-side comparison makes it very easy to compare which company outperforms the other on each day of the week.

The following graph shows the annual revenues of two companies, close competitors in the same market, over a recent six year period. 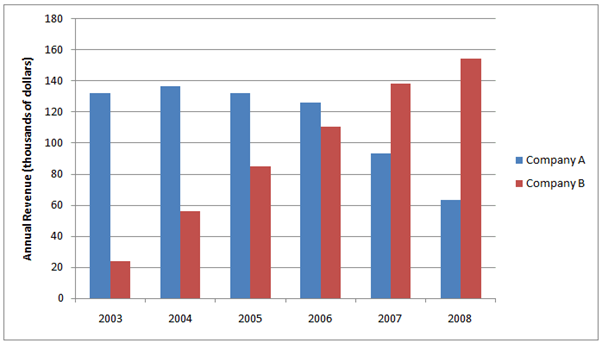