Physics : Interaction of a magnetic field with a charge Physics Notes | EduRev

The document Interaction of a magnetic field with a charge Physics Notes | EduRev is a part of the Physics Course Basic Physics for IIT JAM.
All you need of Physics at this link: Physics 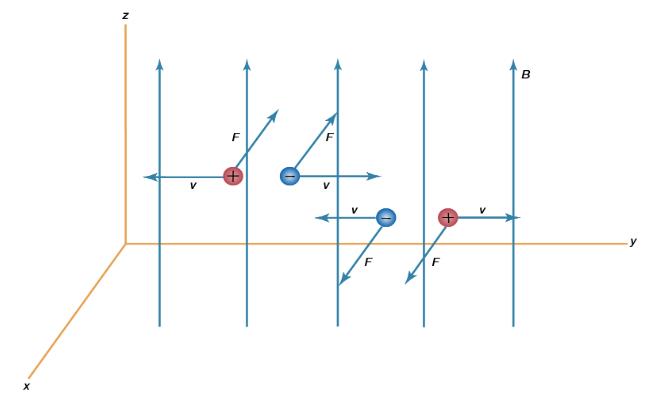 Depending on the initial orientation of the particle velocity to the magnetic field, charges having a constant speed in a uniform magnetic field will follow a circular or helical path.

Electric current in wires are not the only source of magnetic fields. Naturally occurring minerals exhibit magnetic properties and have magnetic fields. These magnetic fields result from the motion of electrons in the atoms of the material. They also result from a property of electrons called the magnetic dipole moment, which is related to the intrinsic spin of individual electrons. In most materials, little or no field is observed outside the matter because of the random orientation of the various constituent atoms. In some materials such as iron, however, atoms within certain distances tend to become aligned in one particular direction.Magnets have numerous applications, ranging from use as toys and paper holders on home refrigerators to essential components in electric generators and machines that can accelerate particles to speeds approaching that of light. The practical application of magnetism in technology is greatly enhanced by using iron and other ferromagnetic materials with electric currents in devices like motors. These materials amplify the magnetic field produced by the currents and thereby create more powerful fields.While electric and magnetic effects are well separated in many phenomena and applications, they are coupled closely together when there are rapid time fluctuations. Faraday’s law of induction describes how a time-varying magnetic field produces an electric field. Important practical applications include the electric generator and transformer. In a generator, the physical motion of a magnetic field produces electricity for power. In a transformer, electric power is converted from one voltage level to another by the magnetic field of one circuit inducing an electric current in another circuit.The existence of electromagnetic waves depends on the interaction between electric and magnetic fields. Maxwell postulated that a time-varying electric field produces a magnetic field. His theory predicted the existence of electromagnetic waves in which each time-varying field produces the other field. For example, radio waves are generated by electronic circuits known as oscillators that cause rapidly oscillating currents to flow in antennas; the rapidly varying magnetic field has an associated varying electric field. The result is the emission of radio waves into space (see electromagnetic radiation: Generation of electromagnetic radiation).Many electromagnetic devices can be described by circuits consisting of conductors and other elements. These circuits may operate with a steady flow of current, as in a flashlight, or with time-varying currents. Important elements in circuits include sources of power called electromotive forces; resistors, which control the flow of current for a given voltage; capacitors, which store charge and energy temporarily; and inductors, which also store electrical energy for a limited time. Circuits with these elements can be described entirely with algebra. (For more complicated circuit elements such as transistors, see semiconductor device and integrated circuit).Two mathematical quantities associated with vector fields, like the electric field E and the magnetic field B, are useful for describing electromagnetic phenomena. They are the flux of such a field through a surface and the line integral of the field along a path. The flux of a field through a surface measures how much of the field penetrates through the surface; for every small section of the surface, the flux is proportional to the area of that section and depends also on the relative orientation of the section and the field. The line integral of a field along a path measures the degree to which the field is aligned with the path; for every small section of path, it is proportional to the length of that section and is also dependent on the alignment of the field with that section of path. When the field is perpendicular to the path, there is no contribution to the line integral. The fluxes of E and B through a surface and the line integrals of these fields along a path play an important role in electromagnetic theory. As examples, the flux of the electric field E through a closed surface measures the amount of charge contained within the surface; the flux of the magnetic field B through a closed surface is always zero because there are no magnetic monopoles (magnetic charges consisting of a single pole) to act as sources of the magnetic field in the way that charge is a source of the electric field.