A more convenient notation is complex notation.  For any angle θ,

We therefore rewrite the above equation as

Two or more waves traveling in the same medium travel independently and can pass through each other.  In regions where they overlap we only observe a single disturbance.  We observe interference.  When two or more light waves interfere, the resulting electric field amplitude is equal to the vector sum of the individual field amplitudes.  If two waves with equal amplitudes are in phase and overlap i.e. if crest meets crest and trough meets trough, then we observe a resultant wave with twice the amplitude.  We have constructive interference.  If the two overlapping waves, however, are completely out of phase, i.e. if crest meets trough, then the two waves cancel each other out completely.  We have destructive interference.

The result of the addition is a linearly polarized plane electromagnetic waves with the same wavelength but a different phase and amplitude, traveling along the x-axis.  Here AR is the resultant amplitude and φR is the resultant phase.

To find the magnitude of a complex number we multiply the number by its complex conjugate and then take the square root.  The square of the resultant amplitude is given by

To find φR we use 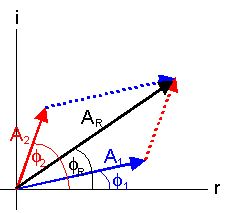 We call vp = ω/k = c/n the phase velocity of the waves and vg = δω/δk the group velocity.  For electromagnetic waves in empty space vp = vg = c.  If we have dispersion in a material and the index of refraction n = n(k), the the group and phase velocity are not equal to each other. 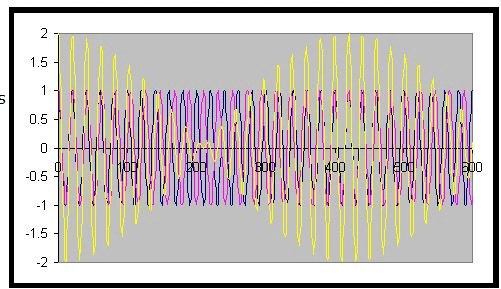 We can set up division of amplitude interference by dividing the amplitude of the incident beam is divided into two or more parts either by reflection, partial reflection or refraction.

When the medium through which a wave travels abruptly changes, the wave may be partially or totally reflected.  When studying mechanical waves we find that when a wave pulse traveling along a rope reaches the end of the rope, it is totally reflected.  The details of the reflection depend on if the end of the rope is tied down and fixed, or if it is allowed to swing loose.

A wave pulse, which is totally reflected from a rope with a fixed end is inverted upon reflection.  The phase shift of the reflected wave with respect to the incident wave is π (180o). 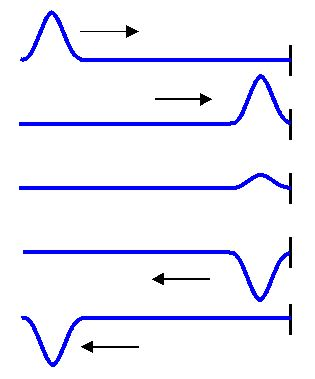 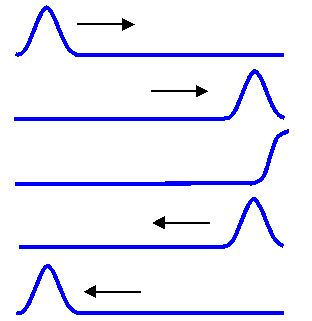 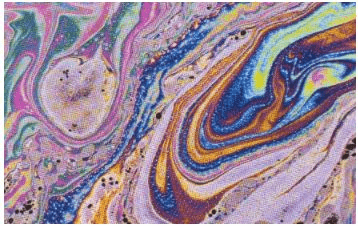 Constructive and destructive interference of reflected light waves causes the colorful patterns we often observe in thin films, such as soap bubbles and layers of oil on water.  Thin-film interference is the interference of light waves reflecting off the top surface of a film with the waves reflecting from the bottom surface.  If the thickness of the film is on the order of the wavelength of light, then colorful patterns can be obtained, as shown in the image on the right.

Consider the case of a thin film of oil of thickness t floating on water.  For simplicity, assume that the light is incident normally, so that the angle of incidence and the angle of reflection are zero.

where λn is the wavelength of the light in oil. 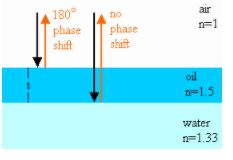 In vacuum we have λf = c.  In a medium with index of refraction n we have λnf = c/n. The frequency of oscillation is the same in vacuum and in a medium, therefore λn = λ/n. For constructive interference we therefore need

Destructive interference occurs when the thickness of the oil film is equal to (½)λn, λn, (3/2)λn, etc.

For destructive interference we therefore need

Waves incident at an angle θi on the air oil interface are refracted as they enter the oil.  The angle of refraction θt is found from Snell's law, nairsinθi = noilsinθt.  If they are reflected off the second interface, then they travel a distance 2t/cosθt in the oil.  When they emerge again from the oil into the air and propagate parallel to the waves reflected at the air-oil interface, then the total optical path length difference is

For constructive interference we therefore need

and for destructive interference we need

The destructive interference of reflected light waves is utilized to make non-reflective coatings.  Such coatings are commonly found on camera lenses and binocular lenses, and often have a bluish tint.  The coating is put over glass, and the coating material generally has an index of refraction less than that of glass.  Then the phase shift of both reflected waves is 180°, and a film thickness equal to 1/4 of the wavelength of light in the film produces a net shift of ½ wavelength, resulting in cancellation.  For such non-reflective coatings the minimum film thickness t required is

where n is the index of refraction of the coating material.  A coating with thickness t = λ/4n prevents the reflection of most of the light with a wavelength λ close to λ = 4nt.  The coating does not reflect a specific range of wavelengths.  Often that range is chosen to be in the yellow-green region of the spectrum, where the eye is most sensitive.  Lenses coated for the yellow-green region reflect in the blue and red regions, giving the surface a familiar purple color.

When sunlight reflects from a thin film of soapy water, the film appears multicolored, in part because destructive interference removes different wavelengths from the light reflected at different places, depending on the thickness of the film.  As the film becomes thinner and thinner, it looks darker and darker in reflected light, appearing black just before it breaks. The blackness means that destructive interference removes all wavelengths from the reflected light when the film is very thin.  Explain!