Suppose that a man sets himself in motion backward by pushing against a wall. The forces acting on the man are his weight 'W' the upward force N exerted by the ground and the horizontal force N exerted by the wall. The works of 'W' and of N are zero because they are perpendicular to the motion. The force N' is the unbalanced horizontal force that imparts to the system a horizontal acceleration. The work of N', however, is zero because there is no motion of its point of application. We are therefore confronted with a curious situation in which a force is responsible for acceleration, but its work, being zero, is not equal to the increase in kinetic energy of the system.

The new feature in this situation is that the man is a composite system with several parts that can move in relation to each other and thus can do work on each other, even in the absence of any interaction with externally applied forces. Such work is called internal work. Although internal forces play no role in acceleration of the composite system, their points of application can move so that work is done; thus the man's kinetic energy can change even though the external forces do no work.

Draw the force at proper point where it acts that give proper importance of the point of application of force. 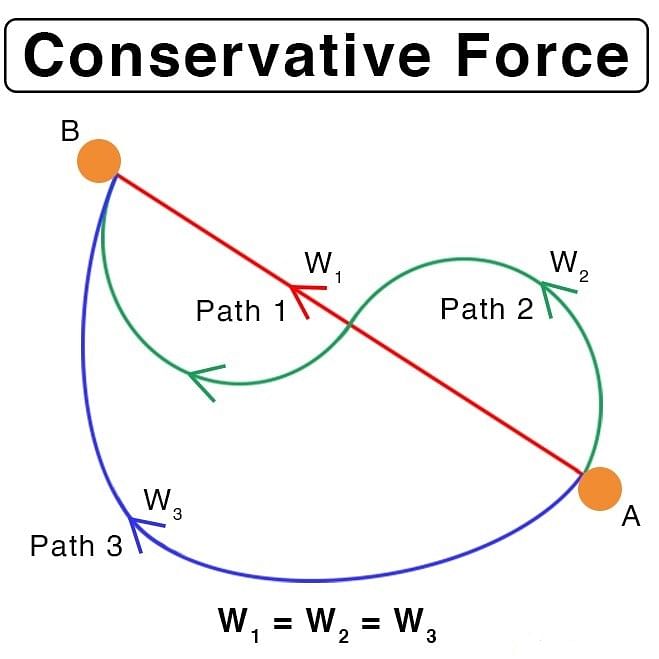 Consider a body of mass m being raised to a height h vertically upwards as shown in above figure. The work done is mgh. Suppose we take the body along the path as in (b). The work done during horizontal motion is zero. Adding up the works done in the two vertical parts of the paths, we get the result mgh once again. Any arbitrary path like the one shown in (c) can be broken into elementary horizontal and vertical portions. Work done along the horizontal path is zero. The work done along the vertical parts add up to mgh. Thus we conclude that the work done in raising a body against gravity is independent of the path taken. It only depends upon the initial and final positions of the body. We conclude from this discussion that the force of gravity is a conservative force.

(i) Gravitational force, not only due to Earth due in its general form as given by the universal law of gravitation, is a conservative force.

(ii) Elastic force in a stretched or compressed spring is a conservative force.

Complete recoverability is an important aspect of the work done by a conservative force.

Ist format : (When constant force is given)

Ex.9 An object is displaced from position vector

Find the work done by this force.

A force is said to be non-conservative if work done by or against the force in moving a body depends upon the path between the initial and final positions.

The frictional forces are non-conservative forces. This is because the work done against friction depends on the length of the path along which a body is moved. It does not depend only on the initial and final positions. Note that the work done by frictional force in a round trip is not zero.

In equation (1) we can calculate work done only when we know the path taken by the particle.

The document Internal Work & Conservative Force Notes | Study Physics For JEE - JEE is a part of the JEE Course Physics For JEE.
All you need of JEE at this link: JEE
Join Course