Details about Meeting:
i. During the meeting, Ms. Sushma Swaraj and Lieutenant-General Tariq Shah Bahramee pushed for efforts to combat the menace of opium cultivation and drugs trafficking which is the main source of funding terrorism against the people of Afghanistan.
ii. Ms. Swaraj assured India’s support to Afghan government and the people of Afghanistan for building a peaceful, stable, united and prosperous nation.
iii. Lieutenant-General Tariq Shah Bahramee was in India to attend 10th edition of Defence Expo 2018 in Tamil Nadu. During the course of this visit, he also met Union Defence Minister Nirmala Sitharaman.
Quick Facts about Afghanistan:
♦ Capital – Kabul
♦ Currency – Afghani
♦ Current President – Ashraf Ghani
♦ Important Rivers – Helmand River, Kunduz River

India, Russia sign 7 MoU at Defence expo:
i. Earlier, at the third India-Russia Military Industrial Conference, discussions were made on improvement of after-sales support of Russian origin defence platforms used by Indian defence forces.
ii. The 7 MoUs that were signed are:

Kazakhstan, India agree to enhance energy cooperation
The state of cooperation between Kazakhstan and India in the energy sector was discussed and analysed at the 16th International Energy Forum held in New Delhi from 10th to 12thApril 2018.
Kazakhstan, India agree to enhance energy cooperation:
i. A delegation from Kazakhstan, led by the Vice-Minister of Energy, M. Mirzagaliyev, held talks with the Indian delegation led by Minister for Petroleum and Natural Gas Dharmendra Pradhan.
ii. The talks were focused on “The future of global energy security – transition, technology, trade and investment”, and how Kazakhstan and India can improve cooperation in the energy sector within the framework of the IEF and the Gas Exporting Countries Forum (GECF).
About Gas Exporting Countries Forum (GECF):
♦ Secretary General – Yury Sentyurin
♦ Headquarters – Doha, Qatar

US, Britain and France launch military operation against Syria
On 13th April 2018, US President Donald Trump launched air strikes on Syria in a combined operation with France and Britain. 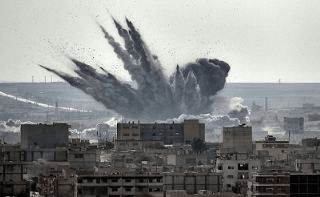