About IAF’s Participation:
i. The IAF contingent consists of 145 air-warriors including Garud team, 04 X Su-30 MKI, 01 X C-130 and 01 X C-17.
ii. It would be led by Group Captain CUV Rao VM .
iii. The contingent will assemble at  Air Force Station Kalaikunda and depart for the exercise on 19 Jul 18 from India to Australia via Indonesia.

Agenda of the Participation:
i. During the flight from India to Australia and back, Su-30 MKI will carry out air to air refueling with IL-78 tankers.
ii. And on its return leg from Darwin to Subang, Su-30 MKI will be refueled in air for the first time by RAAF KC-30A.
iii. During the transit to Australia, IAF contingent will also have constructive engagement with Indonesian and Malaysian Air Forces.

India tops list of skilled visa immigrants in Australia from 2000 to 2016: ACMIID
On July 20, 2018, According to The Australian Census and Migrants Integrated Dataset (ACMID), India tops list of skilled visa immigrants according to official figures with nearly 3 lakh Indians who migrated from 1 January 2000 to 9th August 2016.
i. They have topped the charts on skilled visa.
ii. As many as 291,916 Indians migrated to Australia , out of which , 154,012 individuals Australian citizenship.
iii. This data was released by the Australian Bureau of Statistics (ABS). 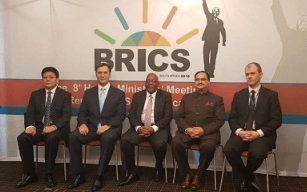 J P Nadda addresses 8th BRICS Health Ministers’ Meeting:
i. J P Nadda in his address said that, India is committed to eliminate TB by 2025.
ii. He said that India is committed to achieve Universal Health Coverage (UHC) as articulated in its National Health Policy.
iii. He stated that to achieve the vision of UHC, Indian Prime Minister Narendra Modi recently launched the ‘Ayushman Bharat’ (Long Live India) programme.
iv. Through the Health and Wellness Centres the programme aims to provide comprehensive primary healthcare services and National Health Protection Mission for secondary and tertiary care aims to cover nearly 100 million families.
v. He said that India’s achievement in reducing the Maternal Mortality Ratio (MMR) by 77%, from 556 per 100000 live births in 1990 to 130 per 100 000 live births in 2016 was commended by Regional Director, WHO SEARO.
vi. With this achievement India is on track to achieve the Sustainable Development Goal (SDG) target of MMR below 70 by 2030.
vii. He added that, schemes like Pradhan Mantri Surakshit Matritva Abhiyan, enabling women to access antenatal check-ups, obstetric gynaecologists and to track high-risk pregnancies, etc., and Janani Shishu Suraksha Karyakram have been rolled out.
viii. He said that in order to reduce the burden of non-communicable disease (NCD)s, India has already begun universal screening for prevention and management of 5 common NCDs including hypertension, diabetes and 3 common cancers of oral cavity, breast and cervix throughout India.
ix. He said that India has started AMRIT (Affordable Medicines & Reliable Implants for Treatment) Deendayal pharmacies to offer medicines for cancer, cardiovascular diseases and cardiac implants at low price.