3.6 INTERPHASE MASS TRANSFER THEORY The process of mass transfer from the bulk of one phase to the interphse surface and then from the interphase to the bulk of another phase is called interphase mass transfer. As an example absorption of sulfur dioxide from air occurs by water. In this case sulfur dioxide diffuses through air and then passes through the interface between the air and water and finally, diffuses through the adjacent immiscible water phase. Here mass transfer occurs in each phase because of concentration gradient till an equilibrium state (i.e., chemical potential of the component becomes same for both the phases) exists at the interface between the phases. When a system is in equilibrium, there is no net mass transfer between the phases. In cases involving ideal gas and liquid phases, the fairly simple useful relation (Equation (3.71)) known as Raoult’s law can be applied for relating the equilibrium concentrations in the two-phases.

(3.74)After rearranging it can be written as: 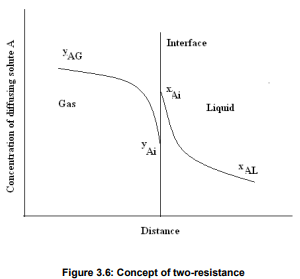