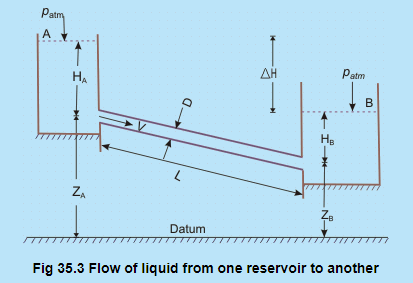 where hf is the loss of head in the course of flow from A to B .

where, V is the average velocity of flow in the pipe.

(contd from previous...) Concept of Flow Potential and Flow Resistance

The velocity V in the above equation is usually substituted in terms of flow rate Q , since, under steady state, the flow rate remains constant throughout the pipe even if its diameter changes. Therefore, replacing V in Eq. (35.11) as

The term R is defined as the flow resistance .

ΔH in Eq. (35.14) is the head causing the flow and is defined as the difference in flow potentials between A and B.