Concept of Friction Factor in a pipe flow:

where, V  is the average velocity of flow given by  V= Q/ A , Q and A are the volume flow rate through the duct and the cross-sectional area of the duct respectively.

From a force balance of a typical fluid element (Fig. 35.1) in course of its flow through a duct of constant cross-sectional area, we can write

is the shear stress at the wall and  Δp* is the piezometric pressure drop over a length of L . A and Sare respectively the cross-sectional area and wetted perimeter of the duct. Substituting the expression (35.2) in Eq. (35.1), we have,

or in terms of head loss (energy loss per unit weight)

where, hf  represents the loss of head due to friction over the length L of the pipe. 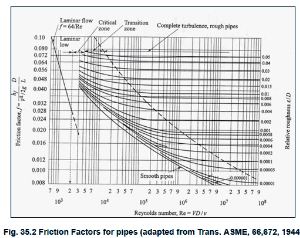 In practice, there are three distinct classes of problems relating to flow through a single pipe line as follows:

In the first category of problems, the friction factor f is found out explicitly from the given values of flow rate and pipe diameter. Therefore, the loss of head hf and the power required, P can be calculated by the straightforward application of Eq.(35.6b).