In this Module of Probability you will be covering following  Objectives

Text - CommentsProbability is one of the most important mathematical concepts that has a real presence & impact  in our daily lives. There is a consistent presence of probability questions in CAT & other B school entrances at a min of 2 questions every year. This makes this chapter extremely important for an aspirant. The students who didn't have Mathematics as their core subject after Class X/XII th classes have been seeing CAT exam as a test of Class XII standard. This leads to students taking a negative approach while tackling/preparing for the Quantitative aptitude  section. EduRev suggests Students that the Math asked in MBA entrance is mainly logical while studying the chapter.In this chapter you  intend to improve your concepts of probability to such an extent that you feel in total control of this topic through easy methods of explanations & practice examples. For those who are experienced in the topic, you advise you to use this chapter both for revising the basic concepts and practice the examples.

What is Probability?Probability is simply how likely something is to happen. Whenever you’re not certain about the outcome of an event, you can talk about the probabilities of certain outcomes—how likely they are.Ex:

Sol. Here the answer is ⅚ ,We have the event of getting any number greater than 1, you have following possibilities for such an event - 2. 3. 4. 5 & 6.The individual probabilities of each of these are ⅙,⅙, ⅙ ,⅙  and ⅙ respectively.Hence, the required probability is ⅙  + ⅙  + ⅙ +⅙  + ⅙  = ⅚.Usually you would encounter two major types of problems in Probability with the the use of conjunctions AND and OR:In general, event definition means breaking up the event to the most basic building blocks, which are commonly through the two English conjunctions— AND and OR.‘AND’ as a binding conjunctive.Whenever you see AND as the natural conjunction joining two separate parts of the event definition, you can replace the AND by the multiplication (X) sign.Thus, if E AND R have to occur, and if the probability of their occurrence are P(E) and P(R) respectively, then the probability that E AND R occur is obtained by connecting P(E) AND P(R). Replacing the AND by multiplication sign you get the required probability as:Req Probability = P(E) X P(R)Example. Let’s try solving an example, If you have the probability of E hitting a target as 1/2 and that of R hitting the target as 1/5, then the probability that both hit the target if one shot is taken by both of them is?Sol. Event here is that E hits the target AND R hits the target, both hitting the target. Hence the resulting probability is going to beProbability =  P(E) AND P(R) = P(E) X P(R)Using the values given of P(E) & P(R),P(E) X P(R) = ½  X ⅕  = 1/10

Question for Introduction: Probability
Try yourself:Ques. In a throw of two dice, find the probability of getting one prime and one composite number.
Explanation

Similarly, in a throw of a dice, there are only 2 possibilities of getting composite numbers viz : 4 or 6 and this gives a probability of 1/3 for getting a composite number.
The event is— getting one prime and one composite number.
This can be got as:
The first number is prime and the second is composite OR the first number is composite and the second is prime.
= (1/2) X (1/3) + (1/3) X (1/2) = 1/3
EduRev Tip: ‘1’ is not a prime number.
‘OR’ as a binding conjunctive.
Whenever you use OR as the natural conjunction joining two separate parts of the event definition, you replace the OR by the addition (+) sign.
Thus, if E OR R have to occur, and if the probability of their occurrence are P(E) and P(R) respectively, then the probability that E OR R occur is obtained by connecting P(E) AND P(R). Replacing the OR by addition sign you get the required probability as:
Req Probability = P(E) + P(R)

View Solution
Example. If you have the probability of E hitting a target as 1/2 and that of R hitting the target as 1/5, then the probability that both hit the target if one shot is taken by either of them is?Sol. As you can see whether E OR R hits the target, the outcome is counted even if one of them hits the target. Hence the resulting probability is going to beProbability =  P(E) OR P(R) = P(E) + P(R)Using the values given of P(E) & P(R),P(E) + P(R) = ½ + ⅕  = 7/10Unlike above example where the event will happen only with both E & R events occurring , here if any one of E, R events can occur.

The event definition here is: 1st bag and black ball OR 2nd Bag and Black Ball. The chances of picking up either the 1st OR the 2nd Bag are 1/2 each.

View Solution
Practice Question
Question for Introduction: Probability
Try yourself:In a four game match between Monica and Chandler, the probability that Chandler wins a particular game is 2/5 and that of Monica winning a game is 3/5. Assuming that there is no probability of a draw in an individual game, what is the chance that the match is drawn (Score is 2–2).
Explanation

EduRev Tip:  In the above question you tried to identify the sub-events & try to add them based on the event definition.

EduRev Tip:  In the above question you tried to identify the sub-events & try to add them based on the event definition.Important Consideration during defining Events:Brief Intro,While attempting the questions, you need to take into considerations certain activities/events. Questions in CAT exams usually have direct or indirect mention of such events.Impossible event and certain eventAn impossible event has no chance of occurring. If event A is impossible, then P(A) = 0A certain event is certain to occur. If event A is certain, then It is usually represented by P(A) & the value of P(A) = 1.Random experiment An experiment whose outcome has to be among a set of events that are completely known but whose exact outcome is unknown is a random experiment (e.g. Throwing of a dice, tossing of a coin). Most questions on probability in CAT are based on random experiments.Sample space This is defined in the context of a random experiment and denotes the set representing all the possible outcomes of the random experiment. [e.g. Sample space when a coin is tossed is (Head, Tail). Sample space when a dice is thrown is (1, 2, 3, 4, 5, 6).]Mutually Exclusive EventsTwo or more events are said to be mutually exclusive; these events cannot occur simultaneously. Two or more events are said to be compatible if they can occur simultaneously. Two events (A and B) are mutually exclusive if the intersection of two events is null or they have no common element i.e. A ∩ B = φ.e.g. In drawing a card from a deck of 52 cards:A: The event that it is red.B: The event that it is black.C: The event that it is a king.In the above case events A and B are mutually exclusive but the events B and C are not mutually exclusive or disjoint since they may have common outcomes. 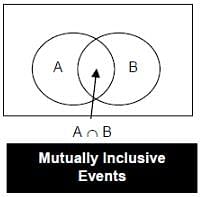 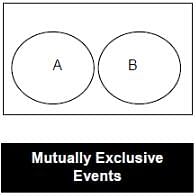 Equally likely events: If two events have the same prob- ability or chance of occurrence they are called equally likely events. (In a throw of a dice, the chance of 1 showing on the dice is equal to 2 is equal to 3 is equal to 4 is equal to 5 is equal to 6 appearing on the dice.)Exhaustive set of events: A set of events that includes all the possibilities of the sample space is said to be an exhaus- tive set of events. (e.g. In a throw of a dice the number is less than three or more than or equal to three.)Example. If a two digit no. is selected at random. What is the probability of getting a number, which has both the digits same?Sol. The total 2 digit numbers are 10 to 99 ⇒ 90Required numbers are 11, 22, - - - - - 99 ⇒ 9So probability = 9/90 = 1/10Independent events An event is described as such if the occurrence of an event has no effect on the probability of t76he occurrence of another event. (If the first child of a couple is a boy, there is no effect on the chances of the second child being a boy.)Conditional probability It is the probability of the occurrence of an event A given that the event B has already occurred. This is denoted by P(A|B). (E.g. The probability that in two throws of a dice you get a total of 7 or more, given that in the first throw of the dices the number 5 had occurred.)Random Experiment: is the one which gives one or more results under identical conditions. E.g. a coin is tossed.The set of all possible outcomes of a random experiment is known as the sample space and every outcome is a sample point.Example. A coin is tossed and a single 6-sided dice is rolled. Find the probability of getting ahead on the coin and a 3 on the dice.Sol. P(head) = 1/2P(3) = 1/6P(head and 3) = 1/2.1/6 = 1/12Probability of an EventIf there are n-elementary events associated with a random experiment and m of them are favorable to an event A, then the probability of happening of A is denoted by P (A) and is defined as the ratio m/n.Probability of an event occurring =

Sum RuleIf E and F are two mutually exclusive events, then the probability that either event E or event F will occur in a single trial is given by:P(E or F) or P (E ∪ F) = P(E) + P(F)If the event is not mutually exclusive, thenP(E ∪ F) = P(E) + P(F) – P(E and F together)Note: P (neither E nor F) = 1 – P(E or F).Complement of an eventSince the number of cases in which the event A will not happen is n - m, therefore if

denotes not happening of A, then the probability P (

) of not happening of A is given byP (

Required probability that shows up exactly thrice is given by: