The document Introduction - The Companies Act, 2013 CA CPT Notes | EduRev is a part of the CA CPT Course Business Laws for CA Foundation.
All you need of CA CPT at this link: CA CPT

In this chapter, the students are exposed to the working knowledge on the introductory part of the Companies Act, 2013, and after reading this chapter the student should be able to understand the following aspects:

The company and Corporate veil theory

Classes of companies under the Companies Act

Registration and incorporation of companies

Due to changes in the national and international economic environment and to facililate expansion and growth of our economy, the Central Government decided to replace the Companies Act, 1956 with a new legislation. The Companies Act, 2013 contains 470 sections and seven schedules. The entire Act has been divided into 29 chapters. A substantial part of this Act is in the form of Companies Rules. The Companies Act, 2013 aims to improve corporate governance, simplify regulations, strengthen the interests of minority investors and for the first time legislates the role of whistle-blowers. Thus, this enactment seeks to make our corporate regulations more contemporary.

Applicability of the Companies Act, 2013:

The provisions of the Act shall apply to-

• Companies incorporated under this Act or under any previous company law.

• Any other company governed by any special Act for the time being in force.

• Such body corporate which are incorporated by any Act for time being in force, and as the Central Government may by notification specify in this behalf.

COMPANY: MEANING AND ITS FEATURES

Meaning: According to Chief Justice Marshall, “a corporation is an artificial being, invisible, intangible, existing only in contemplation of law. Being a mere creation of law, it possesses only those properties which the charter of its creation confers upon it, either expressly or as accidental to its very existence.

In the words of professor Haney “A company is an incorporated association, which is an artificial person created by law, having a separate entity, with a perpetual succession and a common seal.” This definition sums up the meaning as well as the features of a company succinctly.

Features of a Company: 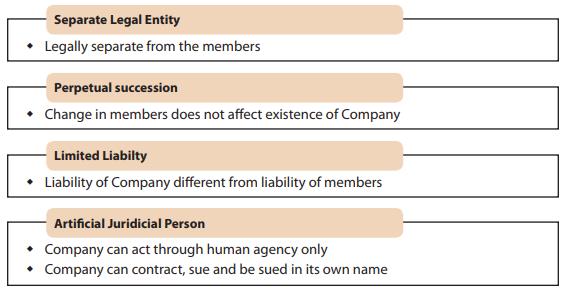 We have seen the definition given to company from a layman’s point of view and legal point of view. But the company form of organization has certain distinctive features that help us to understand the realms of a company. Following are the main features:

I. Separate Legal Entity: There are distinctive features between different forms of organisations and the most striking feature in the company form of organisation vis-à-vis the other organisations is that it acquires a unique character of being a separate legal entity. In other words, when a company is registered, it is clothed with a legal personality. It comes to have almost the same rights and powers as a human being. Its existence is distinct and separate from that of its members. A company can own property, have bank account, raise loans, incur liabilities and enter into contracts.

(a) It is at law, a person is different altogether from the subscribers to the memorandum of association. Its personality is distinct and separate from the personality of those who compose it.

(b) Even members can contract with company, acquire right against it or incur liability to it. For the debts of the company, only its creditors can sue it and not its members.

A member does not even have an insurable interest in the property of the company. The leading case on this point is of Macaura v. Northern Assurance Co. Limited (1925):

Fact of the case

Macaura (M) was the holder of nearly all (except one) shares of a timber company. He was also a major creditor of the company. M Insured the company’s timber in his own name. The timber was lost in a fire. M claimed insurance compensation. Held, the insurance company was not liable to him as no shareholder has any right to any item of property owned by the company, for he has no legal or equitable interest in them.

II Perpetual Succession: Members may die or change, but the company goes on till it is wound up on the grounds specified by the Act. The shares of the company may change hands infinitely but that does not affect the existence of the company. Since a company is an artificial person created by law, law alone can bring an end to its life. Its existence is not affected by the death or insolvency of its members.

III Limited Liability: The liability of a member depends upon the kind of company of which he is a member. We know that company is a separate legal entity which is distinct from its members.

(i) Thus, in the case of a limited liability company, the debts of the company in totality do not become the debts of the shareholders. The liability of the members of the company is limited to the extent of the nominal value of shares held by them. In no case can the shareholders be asked to pay anything more than the unpaid value of their shares.

(ii) In the case of a company limited by guarantee, the members are liable only to the extent of the amount guaranteed by them and that too only when the company goes into liquidation.

(iii) However, if it is an unlimited company, the liability of its members is unlimited as well.

(2) Further, the company being a separate legal entity can own property, have banking account, raise loans, incur liabilities and enter into contracts. Even members can contract with company, acquire right against it or incur liability to it. It can sue and be sued in its own name. It can do everything which any natural person can do except be sent to jail, take an oath, marry or practice a learned profession. Hence, it is a legal person in its own sense.

(4) Thus, a company is called an artiffcial legal person.

V Common Seal: A company being an artificial person is not bestowed with a body of a natural being. Therefore, it works through the agency of human beings. Common seal is the official signature of a company, which is affixed by the officers and employees of the company on its every document. The common seal is a seal used by a corporation as the symbol of its incorporation.