Flexible Machine ElementsBelt drives are called flexible machine elements. Flexible machine elements are used for a large number of industrial applications, some of them are as follows.1. Used in conveying systems Transportation of coal, mineral ores etc. over a long distance2. Used for transmission of power. Mainly used for running of various industrial appliances using prime movers like electric motors, I.C. Engine etc.3. Replacement of rigid type power transmission system. A gear drive may be replaced by a belt transmission system

Flexible machine elements has got an inherent advantage that, it can absorb a good amount of shock and vibration. It can take care of some degree of misalignment between the driven and the driver machines and long distance power transmission, in comparison to other transmission systems, is possible. For all the above reasons flexible machine elements are widely used in industrial application. Although we have some other flexible drives like rope drive, roller chain drives etc. we will only discuss about belt drives. 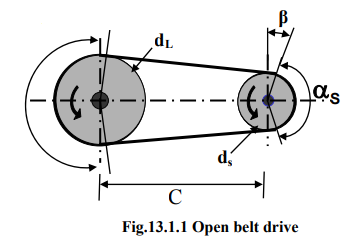 Where angle β is,

This formulae may be verified by simple geometry. 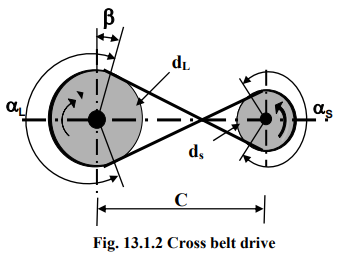 The belt drives primarily operate on the friction principle. i.e. the friction between the belt and the pulley is responsible for transmitting power from one pulley to the other. In other words the driving pulley will give a motion to the belt and the motion of the belt will be transmitted to the driven pulley. Due to the presence of friction between the pulley and the belt surfaces, tensions on both the sides of the belt are not equal. So it is important that one has to identify the higher tension side and the lower tension side, which is shown in Fig. 13.1.3.

When the driving pulley rotates (in this case, anti-clock wise), from the fundamental concept of friction, we know that the belt will oppose the motion of the pulley. Thereby, the friction, f on the belt will be opposite to the motion of the pulley. Friction in the belt acts in the direction, as shown in Fig. 13.1.3, and will impart a motion on the belt in the same direction. The friction f acts in the same direction as T2. Equilibrium of the belt segment suggests that T1 is higher than T2. Here, we will refer T1 as the tight side and T2 as the slack side, ie, T1 is higher tension side and T2 is lower tension side.

Derivation of relationship between belt tensions

The Fig.13.1.4 shows the free body diagram of a belt segment.

where μ is the coefficient of friction between the belt and the pulley. The centrifugal force due to the motion of the belt acting on the belt segment is denoted as CF and its magnitude is,

Where, v is the peripheral velocity of the pulley m is the mass of the belt of unit length,

where, b is the width, t is the thickness and ρ is the density of the belt material. From the equation of equilibrium in the tangential and normal direction,

The final equation for determination of relationship between belt tensions is,

It is important to realize that the pulley, driven or driver, for which the product, μα of (13.1.10) is the least, should be considered to determine the tension ratio. Here, α should be expressed in radians.

Let us determine the magnitude of the initial tension in the belt.

Where, Ti is the initial belt tension .

Since, belt length remains the same, ie, the elongation is same as the contraction,

Velocity ratio of belt drive is defined as,

NL and NS are the rotational speeds of the large and the small pulley respectively, s is the belt slip and t is the belt thickness.

Power transmission of a belt drive is expressed as,

where, P is the power transmission in Watt and v is the belt velocity in m/s.

Sample problem A pump is driven by an electric motor through a open type flat belt drive. Determine the belt specifications for the following data. 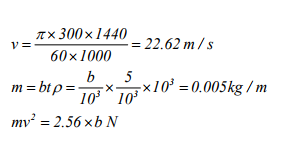 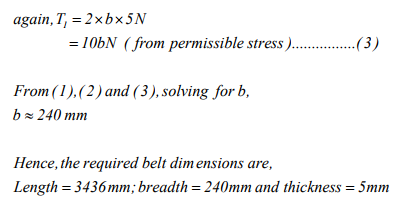