5.3. Introduction to Multicomponent Distillation In industry, most of the distillation processes involve with more than two components. The multicomponent separations are carried out by using the same type of distillation columns, reboilers, condensers, heat exchangers and so on. However some fundamental differences are there which is to be thoroughly understood by the designer. These differences are from phase rule to specify the thermodynamic conditions of a stream at equilibrium. In multicomponent systems, the same degree of freedom is not achieved because of the presence of other components. Neither the distillate nor the bottoms composition is completely specified. The components that have their distillate and bottoms fractional recoveries specified are called key components. The most volatile of the keys is called the light key (LK) and the least volatile is called the heavy key (HK). The other components are called non-keys (NK). Light no-key (LNK) is referred when non-key is more volatile than the light key whereas heavy non-key (HNK) is less volatile than the heavy key. Proper selection of key components is important if a multicomponent separation is adequately specified. Several short-cut methods are used for carrying out calculations in multicomponent systems. These involve generally an estimation of the minimum number of trays, the estimation of minimum reflux rate and number of stages at finite reflux for simple fractionators. Although rigorous computer methods are available to solve multicomponent separation problems, approximate methods are used in practice. A widely used approximate method is commonly referred to as the Fenske-Underwood-Gilliland method.5.3.1. Estimation of Minimum number of trays: Fenske EquationFenske (1932) was the first to derive an Equation to calculate minimum number of trays for multicomponent distillation at total reflux. The derivation was based on the assumptions that the stages are equilibrium stages. Consider a multicomponent distillation column operating at total reflux as shown in Figure 5.24.Equilibrium relation for the light key component on the top tray is

(5.58)An overall material balance below the top tray and around the top of the column can be written as: 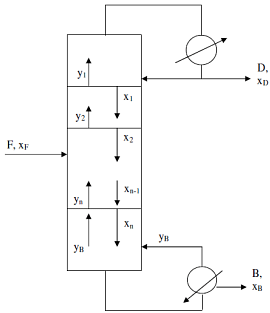 Under total reflux condition, D = 0, thus, V2 = L1. The component material balance for the light key component around the first plate and the top of the column is

(5.63)Continuing this calculation for entire column, it can be written as:

(5.64)In the same fashion, for the heavy key component, it can be written as:

(5.66)The ratio of the K values is equal to the relative volatility, thus the Equation (5.66) can be written as

(5.67)If average value of the relative volatility applies for all trays and under condition of minimum trays, the Equation (5.67) can be written as

(5.72)From the definition of the fractional recovery one can write

(5.74)Once the minimum number of theoretical trays, Nmin is known, the fractional recovery of the non-keys can be found by writing Equation (5.74) for a non-key component and either the light or heavy key. Then solve the Equation for FRNK,B or FRNK,D. If the key component is chosen as light key, then FRNK,D can be expressed as

(5.76)The compositions are constant at the pinch point then

(5.78)The equilibrium relation can be written as

(5.80)Defining the relative volatility αi=mi/mHK and substituting in Equation (5.80) one can express after rearranging as

(5.81)The total vapor flow in the rectifying section at minimum reflux can be obtained by summing Equation (5.81) over all components as:

(5.82)Similarly after analysis for the stripping section, one can get

(5.87)Combining (5.87) with the overall column mass balance for component i can be expressed as

(5.88) Again if the fraction q is known, the change in vapor flow at the feed stage can be expressed as

According to Seader and Henley (1998), an approximate optimum feed-stage location, can be obtained by using the empirical Equation of Kirkbride (1944) as

(ii) To find the minimum reflux at the condition of saturated liquid,