The document Introduction to Acceleration Class 11 Notes | EduRev is a part of the Class 11 Course Physics Class 11.
All you need of Class 11 at this link: Class 11

Motion in Different Acceleration for Different Time IntervalsLet’s understand this through an example. Suppose, a particle started its motion from rest with an acceleration of 1m/s² for 2s and then continued it for next 1s changing to 2m/s². The distance travelled during this will be:After 2s the velocity is, v = u+at = 2 m/sNow, if this is the initial velocity for the second half of the motion, s2=ut+(1/2)at² =3 mDistance traveled in first half is: s1 = 0+(1/2)at² = 2 mHence total distance traveled = s1+s2 = 5 mAverage AccelerationIt is the change in velocity divided by an elapsed time. For instance, if the velocity of a marble increases from 0 to 60 cm/s in 3 seconds, its average acceleration would be 20 cm/s². This means that the marble’s velocity will increase by 20 cm/s every second.It is the rate of change of velocity with respect to displacementAcceleration is a = dv/dt∴ a = dv/(dx/v)a = v(dv/dx)Freefall object experiences an acceleration of g= 9.8m/s² in a downward direction that is towards the center of the earth. In upward direction it is -g = -9.8m/s²Acceleration of the Velocity-Time graph 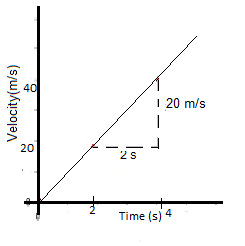 In the given graph, a =  (40-20)/(4-2) = 10 m/s2. For a particle it is equal to the slope of a velocity-time graph.Solved Example:Q. A stone of mass m is thrown straight upward from the top of a multi-story building with an initial velocity of +15 m/s. Find out the acceleration of stone just after it is thrown?A. ZeroB. 10m/s² downwardC. 15m/s² upwardD. 15m/s² downwardAnswer: B. A body in the air always experiences a gravitational force in a downward direction. Thus the body is in the downward direction with a constant magnitude.

Q. A child drops a rock off of a cliff. The rock falls for 15.0 s before hitting the ground. The acceleration due to gravity is g = 9.80 m/s2. What was the velocity of the rock the instant before it hit the ground?
Answer: The rock was released from rest, so the initial velocity is vi = 0.00 m/s. The time in which the change occurred is 15.0 s. The acceleration is 9.80 m/s2. The final velocity must be found, so rearrange the equation: