Gauss was a very talented and gifted mathematician of 19th century who developed the formula :

for the sum of first n natural numbers at the age of 10.

Even when he was a little child of three he could read and make mathematical calculation himself. Gauss provedthe fundamental theorem of Algebra when he was 20 years old. His contribution to mathematics has been immense because his formulae were used in applied field of Astronomy, Differential Geometry and Electricity widely all over the world by scientists.

SERIES
The sum of terms of a sequence is called the series of the corresponding sequence.

is an infinite series, where as

Usually the series of finite number of n terms is denoted by Sn.

Ex.1 Write the first five terms of the sequence, whose nth term is

Ex.2  Find the 20th term of the sequence whose nth term is,

Ex.3 The fibonacci sequence is defined by

Now, we have to find 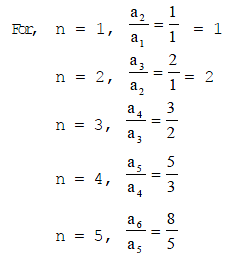 Hence, the required values are

2. The sum of squares of first n natural numbers i.e.

is usually written as

3. The sum of cubes of first n natural numbers i.e.

is usually written as

PROGRESSION
It is not always possible to write each and every sequence of some rule.
For example : Sequence of prime numbers 2, 3, 5, 7, 11,... cannot be expressed explicitly by stating a rule and we do not have any expression for writting the general term of this sequence.
The sequence that follows a certain pattern is called a progression. Thus, the sequence 2, 3, 5, 7, 11,.... is not a progression. In a progression, we can always write the nth term.
Consider the following collection of numbers :
(i) 1, 3, 5, 7...

From the above collection of numbers, we observe that

1. Each term is greater than the previous by 2.

2. In each term the numerator is 1 and the denominator is obtained by adding 1 to the preceding denominator.
Thus, we observe that the collection of numbers given in (i) and (ii) follow a certain pattern and as such are all progressions.

The fixed term 'd' is known as the common difference of the arithmetic progression. It's value can be positive negative or zero. The first term is denoted by 'a' or 'a1' and the last term by

Therefore, the sequence is an arithmetic progression in which the first term a = 6 and the common difference d = 4.

write the first term a and the common difference d. Also write the next two terms after the given last term

Now, we find the successor of

Hence, the next two terms after the given term

1. A sequence of non-zero numbers

is said to be a geometric sequence or G.P.

A sequence of non-zero numbers

is said to be a harmonic sequence or H.P.

where a is the first term and d is the common difference of the A.P.

GENERAL TERM OF AN ARITHMETIC PROGRESSION

rth TERM OF A FINITE ARITHMETIC PROGRESSION FROM THE END

and common difference is – d.
rth term from the end =

But n should be a positive integer. So, 200 is not any term of the given sequence.