Atomic structure refers to the structure of an atom comprising a nucleus (centre) in which protons (positively charged) and neutrons (neutral) are present. Negatively charged particles called electrons revolve around the centre of the nucleus.

According to this theory the Atom is considered to be the hardest, densest, and smallest particle of matter that is indivisible. The atoms belonging to a particular element, are unique.

Drawbacks of Dalton's Theory of Atoms

It fails to explain why atoms of different kinds should differ in mass and valency etc.

The discovery of various sub-atomic particles like electrons, protons, etc. during the late 19th century led to the idea that the atom was no longer an indivisible, small particle of matter.

Characteristics of the three fundamental particles are:

Atomic Mass Unit: The atomic mass unit (amu) is 1/12 of the mass of an individual atom of 6C12, i.e., 1.660 × 10h – 27 kg. The neutron and proton have approximately equal masses of 1 amu and the electron is about 1836 times lighter. Its mass can sometimes be neglected as an approximation.

The electron and proton have an equal, but opposite, electric charges while the neutron is not charged.

Thomson assumed that an atom is a sphere of positive charges uniformly distributed, with the electrons scattered as points throughout the sphere. Rutherford's model of the atom describes that the atom is composed of an atomic nucleus and electrons surrounding the nucleus. This model caused to reject the Thomson model of atom. 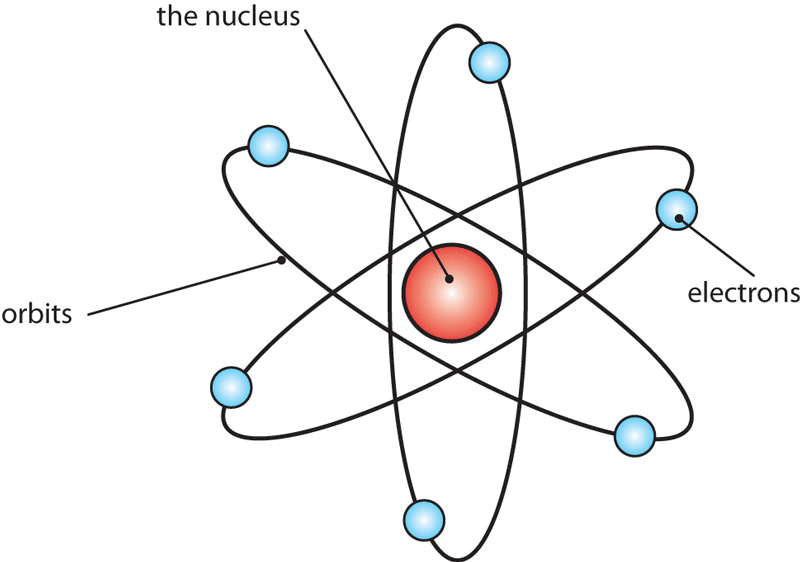 Before going into the details of the Neils Bohr model we would like to introduce you to some important atomic terms.

If the atom gains energy the electron passes from a lower energy level to a higher energy level, energy is absorbed which means a specific wavelength is absorbed. Consequently, a dark line will appear in the spectrum. This dark line constitutes the absorption spectrum.

If an electric discharge is passed through hydrogen gas taken in a discharge tube under low pressure, and the emitted radiation is analyzed with the help of a spectrograph, it is found to consist of a series of sharp lines in the UV, visible, and IR regions. This series of lines is known as a line or atomic spectrum of hydrogen. The lines in the visible region can be directly seen on the photographic film.

Each line of the spectrum corresponds to light of a definite wavelength. The entire spectrum consists of six series of lines each, known after their discoverer as the Balmer, Paschen, Lyman, Brackett, Pfund, and Humphrey series. The wavelength of all these series can be expressed by a single formula.

n1 and n2­ have integral values as follows When a black body is heated, it emits thermal radiation of different wavelengths or frequencies. To explain these radiations, Max Planck put forward a theory known as Planck’s theory. The main points of quantum theory are:

Bohr developed a model for hydrogen and hydrogen-like atoms one-electron species (hydrogenic species). He applied quantum theory in considering the energy of an electron bound to the nucleus. Radius and Energy levels of the hydrogen atom

Consider an electron of mass ‘m’ and charge ‘e’ revolving around a nucleus of charge Ze (where Z = atomic number and e is the charge of the proton) with a tangential velocity v.r is the radius of the orbit in which electron is revolving.By Coulomb’s Law, the electrostatic force of attraction between the moving electron and nucleus is

(where ε0 is the permittivity of free space)

The centrifugal force acting on the electron is

Since the electrostatic force balance the centrifugal force, for the stable electron orbit.

According to Bohr’s postulate of angular momentum quantization, we have

Solving for r we get r =

Hence only certain orbits whose radii are given by the above equation are available for the electron. The greater the value of n, i.e., the farther the level from the nucleus the greater is the radius.

Illustration: Calculate the ratio of the radius of Li+2 ion in 3rd energy level to that of He+ ion in 2nd energy level:

The Energy Level of Hydrogen atom: