Reaction chemistry forms the essence of chemical processes. The very distinctiveness of the chemical industry lies in its quest for transforming less useful substances to those which are useful to modern life. The perception of old art of ‘alchemy’ bordered on the magical; perhaps in today’s world its role in the form of modern chemistry is in no sense any less. Almost everything that is of use to humans is manufactured through the route of chemical synthesis. Such reactive processes need to be characterized in terms of the maximum possible yield of the desired product at any given conditions, starting from the raw materials (i.e., reactants). The theory of chemical reactions indicates that rates of reactions are generally enhanced by increase of temperature. However, experience shows that the maximum quantum of conversion of reactants to products does not increase monotonically. Indeed for a vast majority the maximum conversion reaches a maximum with respect to reaction temperature and subsequently diminishes. This is shown schematically in fig. 8.1. 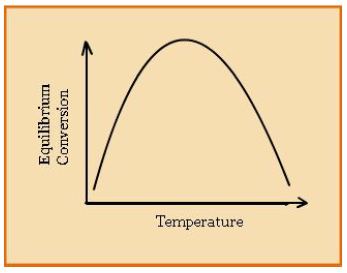 The reason behind this phenomenon lies in the molecular processes that occur during a reaction. Consider a typical reaction of the following form occurring in gas phase: A( g) +B( g) → C ( g) +D( g).The reaction typically begins with the reactants being brought together in a reactor. In the initial phases, molecules of A and B collide and form reactive complexes, which are eventually converted to the products C and D by means of molecular rearrangement. Clearly then the early phase of the reaction process is dominated by the presence and depletion of A and B. However, as the process.

ontinues, the fraction of C and D in the reactor increases, which in turn enhances the likelihood of these molecules colliding with each other and undergoing transformation into A and B. Thus, while initially the forward reaction dominates, in time the backward reaction becomes increasingly significant, which eventually results in the two rates becoming equal. After this point is reached the concentrations of each species in the reactor becomes fixed and displays no further propensity to change unless propelled by any externally imposed “disturbance”(say, by provision of heat). Under such a condition the reaction is said to be in a state of equilibrium. The magnitude of all measurable macroscopic variables (T, P and composition) characterizing the reaction remains constant. Clearly under the equilibrium state the percentage conversion of the reactants to products must be the maximum possible at the given temperature and pressure. Or else the reaction would progress further until the state of equilibrium is achieved. The principles of chemical reaction thermodynamics are aimed at the prediction of this equilibrium conversion.

The reason why the equilibrium conversion itself changes with variation of temperature may be appreciated easily. The rates of the forward and backward reactions both depend on temperature; however, an increase in temperature will, in general, have different impacts on the rates of each. Hence the extent of conversion at which they become identical will vary with temperature; this prompts a change in the equilibrium conversion. Reactions for which the conversion is 100% or nearly so are termed irreversible, while for those which never attains complete conversion are essentially reversible in nature. The fact that a maxima may occur in the conversion behaviour (fig. 8.1) suggests that for such reactions while the forward reaction rates dominate at lower temperatures, while at higher temperatures the backward reaction may be predominant.

The choice of the reaction conditions thus depends on the maximum (or equilibrium) conversion possible.  Further, the knowledge of equilibrium conversions is essential to intensification of a process. Finally, it also sets the limit that can never be crossed in practice regardless of the process strategies. This forms a primary input to the determination of the economic viability of a manufacturing process. If reaction equilibria considerations suggest that the maximum possible conversion over practical ranges of temperature is lower than that required for commercial feasibility no further effort is useful in its further development. On the other hand if the absolute maximum conversion is high then the question of optimizing the process conditions attain significance. Exploration of the best strategy for conducting the reaction (in terms of temperature, pressure, rate enhancement by use of catalytic aids, etc) then offers a critical challenge.

This chapter develops the general thermodynamic relations necessary for prediction of the equilibrium conversion of reactions. As we shall see, as in the case of phase equilibria, the Gibbs free energy of a reaction constitutes a fundamental property in the estimation of equilibrium conversion.The next section presents method of depicting the conversion by the means of the reaction co-ordinate, which is followed by estimation of the heat effects associated with all reactions. The principles of reaction equilibria are then developed.