The document Introduction to GMAT Reading Comprehension Notes | Study Verbal for GMAT - GMAT is a part of the GMAT Course Verbal for GMAT.
All you need of GMAT at this link: GMAT

According to GMAT, each RC passage is a unified whole – that is, the individual sentences and paragraphs support and develop one main idea or central point which the student must identify. 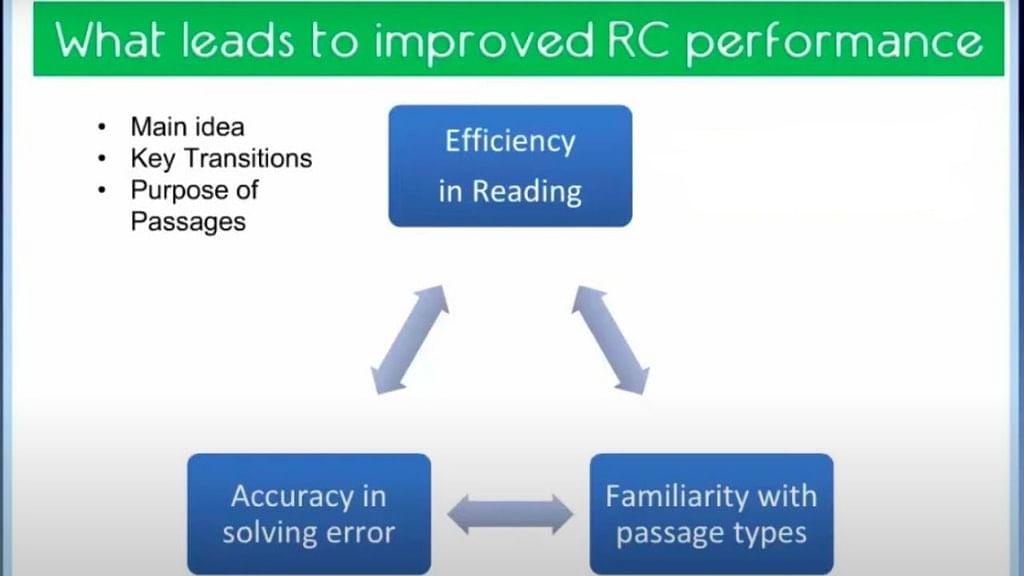 Note: There could be more than one tone in a paragraph, and you need to mark both tones while noting the tones.

Since the GMAT is a computer-based event with time restrictions that can trip up even the most seasoned test-takers, it probably sounds absurd to think that adding work could actually help you get through a section faster. However, passages in the reading comprehension section of the GMAT can be particularly tricky, especially considering that at an average of 350 words, they’re fairly short. We’ve discussed previously the general points you should look to extract from any passage on the GMAT, but before we go any further on taking notes, let’s review those points:

While this may seem simple enough, test-takers often find themselves referring back to a passage, only to find they need to re-read the entire text again. To make life much easier on test day, here are a few things to keep in mind while taking notes during the reading comprehension section of the GMAT.

Resist the temptation to try and rewrite the entire passage.

Rewriting a statement often works well in other facets of GMAT Verbal – particularly in sentence correction – but is counterproductive when tackling a reading comprehension question. No question in the reading comprehension section will ask you to rewrite or correct any part of a passage; you’ll only be required to respond to questions based on the passage, so don’t add any unnecessary work for yourself.

Before you begin a passage on the GMAT, start by creating a quick outline, using the three points we discussed in the previous section. As you read through the passage, jot down anything you find addresses any one of the points we discussed above. With the right amount of practice, you’ll train yourself to spot and take note of the details you’ll need to answer the corresponding questions. More importantly, you’ll be able to refer back to a solid set of notes instead of having to rely on only the passage itself.

Review the questions before you read the passage

Although passages on the GMAT are consistent in the way they are formatted, they’re packed with lots of information that you won’t need to remember to respond to the corresponding questions. The easiest way to find out exactly what you will need to remember? Take a peek at the questions before you dive into your reading.

While your outline should address the three points we discussed in the previous section, knowing what lies ahead in the questions will help you hone in even further on the most relevant information. You’ll also read through passages more quickly (without sacrificing accuracy) because you’ll be focused on finding only the details you’ll need to respond to the questions.

Once you’ve read through a passage, refer back to your notes to answer each question in your own words before looking at the answer choices. While this won’t work quite as well when there isn’t a clear question (i.e. “the author would agree with which of the following statements?), this strategy will help you avoid answer choices that could be correct and rely on what you know to select the answer choice that is correct.

Q.1. Directions: These GMAT reading comprehension practice questions are based on the content of a passage. Read the passage carefully and choose the best answer to each of the questions on the basis of what is stated or implied in the passage.

Questions #1-6 refer to the following passage:

The study of cetacean intelligence has added to our understanding of dolphin behavior. Even though cetaceans, which are marine animals including dolphins, whales, and porpoises, are widely considered intelligent species, conclusions about the type and extent of dolphin intelligence have not yet been reached. However, there are several things that we do know about the ways in which dolphins communicate and behave in groups.

Researchers study the level of communication among dolphins because communication systems can offer insight into an animal’s intelligence. Dolphins produce two primary types of vocalizations called clicks and whistles. Dolphins generally use clicks for the purposes of echolocation and whistles for communication. Dolphins emit clicks as rapid broadband bursts that are sent out into their environment and then echo back, giving them information about their surroundings. Whistles differ from clicks by being sent out as narrow-band frequency modulated signals, which are for communications such as contact calls. Strong evidence supports the idea that dolphins use signature whistles to identify and call to each other.

One hypothesis called the “acoustic flashlight” hypothesis maintains that dolphins may be able to learn passively about their surroundings by listening in on the echolocative inspections of other dolphins. Scientists are researching this idea by looking at how dolphins participate in postural pointing, an activity that humans perform when they point a finger to direct another person towards an object or location.

Communication is also an important part of how dolphins behave in groups, which can range in size from a pair of dolphins to a pod of hundreds of individuals. Researchers have noticed that large packs rely on a highly organized method of communication when responding to predators, such as sharks. When a group of dolphins reacts to an unexpected disturbance, it will quickly move in near-unison to avoid the threat. In this way, dolphins rely on visual and auditory cues to communicate their location and to interpret the locations of others in the pod.

Q.1. It can be inferred from the passage that a dolphin would use clicks instead of whistles to:

a) call to another member of the same pod

b) locate a possible route through an underwater obstacle

c) communicate a perceived threat to other dolphins

d) contact other dolphins when separated from a group

e) identify itself to another calling dolphin

Answer: The correct answer is (B)

Q.2. According to the passage, rapid communication enables dolphins to:

a) work in unison to locate food sources

b) move quickly as a group to escape a perceived threat

e) establish their territories when other cetaceans are present

Answer: The correct answer is (B)

Explanation: The phrase "according to the passage" provides a clue to look directly to the passage for the answer. Notice that paragraph 4 discusses an example when dolphins move "quickly in near-unison to avoid a threat." This example explains how dolphins use rapid communication to move as a group to escape.

Q.3. It can be inferred from the passage that if another animal does not have a communication system as highly advanced as that of a dolphin, then:

b) the other animal is probably a whale or porpoise

d) the other animal does not engage in postural pointing

Answer:  The correct answer is (E).

Q.4. Which of the following is the function of the first paragraph?

Answer: The correct answer is (C).

Q.5. The author of this passage is primarily concerned with:

a) contrasting dolphin communications with those of other cetaceans

d) explaining how dolphins communicate and behave in groups

e) providing an in-depth analysis of a disputed claim

Answer: The correct answer is (D)

The document Introduction to GMAT Reading Comprehension Notes | Study Verbal for GMAT - GMAT is a part of the GMAT Course Verbal for GMAT.
All you need of GMAT at this link: GMAT