The document Introduction to Grammar - Pronouns GMAT Notes | EduRev is a part of the GMAT Course Verbal for GMAT.
All you need of GMAT at this link: GMAT 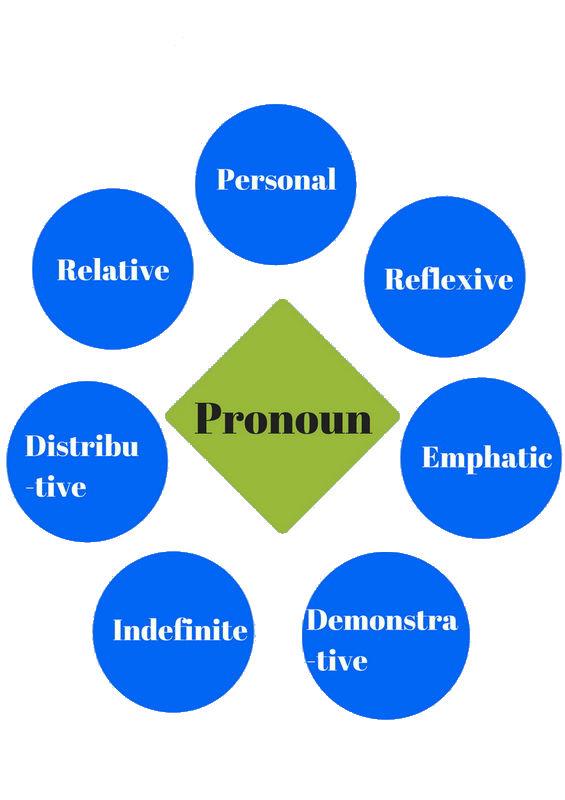 Fig: Types of pronouns.2. Teacher walked in to the class and saw that the students doing the group assignment were too loud, so he told them that the group assignment would have to end if they did not control their volume.Notice how in sentence 1, the nouns are repeated, and, therefore, the sentence is clumsy and difficult to comprehend. On the other hand, in sentence 2, pronouns are used in place of the nouns, and the sentence becomes much more precise and clear.Since pronouns replace nouns, they also express the name of a person, a place, or a thing. E.g.1. Tom was angry at Sheila for not taking Tom to the Central Park, as Tom loves to go to the Central Park for picnics with Sheila.2. Tom was angry at Sheila for not taking him to the Central Park, as he loves to go there for picnics with her.

There are 5 types of pronouns.1. Personal PronounThese pronouns refer to specific people or things. For example: he, she, they, etc. When you use personal pronouns, you should take care to use them in the correct case or form.

3. Indefinite Pronouns:These pronouns refer to people and things that are not specific. For example all, everyone, each, everything, anyone, anything, etc are indefinite pronouns.a. Everyone has the right to vote in this country.b. Each student needs to sign the attendance sheet.

4. Demonstrative Pronouns:These pronouns refer to the nouns that follow them. For example this, those etc are demonstrative pronouns.a. These shoes are mine.b. This box contains several antique items.

5. Reflexive Pronouns:These pronouns are used when the subject of the sentence does something to itself. These pronouns end in –self or –selves.• I cut myself while chopping the vegetables.We also use these pronouns to emphasize the subject.• They themselves cannot handle the situation.

6. Singular and Plural Pronouns:Like a noun, a pronoun can be either singular or plural. Some singular pronouns are he, it, I, her, this etc. Some plural pronouns are they, we, us, them, those etc.