Heat is Energy in Transit. Recall the First law from Thermodynamics.

What is Heat Transfer?

Heat transfer is the transfer of Heat effected by a temperature difference. However, in contrast to what we may have done in Thermodynamics, we are concerned with the rate of heat transfer. For that, we need a different energy balance, one that accounts for the rate of transfer and production, a general energy balance. 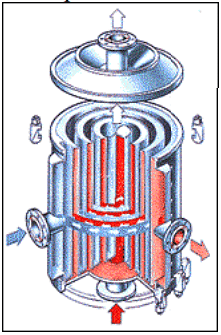 Conduction is the thermal equivalent of diffusion. In gases, energy is exchanged between molecules in collisions. You will recall from Thermodynamics that a measure of the molecular motion and the energy exchange is the temperature and that conduction is the transfer of energy from the more energetic molecules to the less energetic. In the presence of a temperature gradient, energy is then transferred from the high temperature ( more energetic) to the lower temperature(less energetic). For liquids and solids, the example is not as clear. Conduction in liquids the collisions are more frequent and not as energetic and in solids transfer is by vibrations, for example, in a crystal lattice.

The constitutive equation describing the phenomenon is Fourier’s law

What we mean by the notation is the following:

To give you some notion of what I mean, examine a simple onedimensional conduction problem. 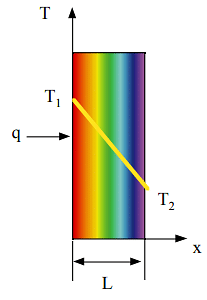 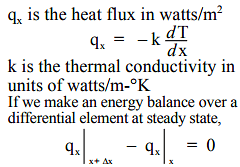 Convection in heat transfer is a process which involves the diffusion of heat and the advection of energy by flow.

The process can be described by Newton’s Law of Cooling

What is the relation between h expressed in English units and SI units ?

Quick estimates for conversion changes, divide watts/m2 -°K by 6 to get BTU/hr-ft2 -°F

Thermal radiation is energy emitted by matter that is at a finite temperature. Emission occurs not only from solids, but from gases and liquids. The energy is carried by electromagnetic waves, originating at the expense of the internal energy of the matter. Conduction and convection depend on the presence of an intermediary. Radiation does not !

It is dimensionless. σ = 5.67 x 10-8 watts/m2 -K4 and T is in degrees Kelvin. The net rate of energy transfer between two surfaces

The view factor, Fij , depends on the distance R between and the orientation of the two surfaces. We will discuss Radiation in the last several weeks of the course.

Your textbook outlines a "stock" procedure for addressing, formulating and solving problems in Heat Transfer. In my view, it is a sound technique and one that I would ask that you follow. It involves several steps, each with a prescribed formula. What folloiws is the outline.

Problem Statement The statement of the problem and the results required

Read the problem carefully, then state briefly and concisely what is know about the problem. This is not a simple restaement of the problem.

Briefly and concisely state the results that are required.

Draw a picture (schematic) of the system. Identify and label the heat transfer processes and the relevant boundaries of the system (control surfaces)

List all the relevant assumptions you will use in formulating the problem.

Compile the property valued for all the calculations to follow and identify the sources of the data.

Discuss the results. This should include the key conclusions. Were the initial assumptions valid ? What effect would there be if they were not? How sensitive is your solution to the parameters?

Statement of the Problem

Measure the conductivity of the metal in a metal rod connected to a constant temperature sink (an ice bath) Water flows through a well-mixed reservoir. In enters at Th1 and leaves at the same temperature as it is in the water reservoir, Th2. The rod, the two reservoirs are insulated from the surroundings. Derive a relationship for the thermal conductivity and recommend a flow rate for the water.

The heat lost by the fluid in the lower reservoir is transferred to the ice batch through the rod. The temperature is known for the ce bath. The water flow is measured and known, and we measure the water temperatures in and out of the reservoir.

2. Find Derive a relationship for the thermal conductivity and recommend a flow rate for the water. 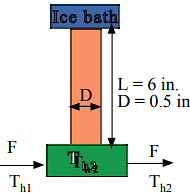 There are a number of assumptions in this energy balance. What are they?

Some are given in the schematic, but what should we list ? 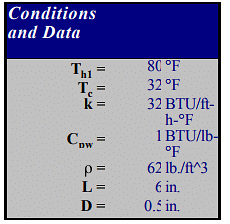 We can solve for the thermal conductivity , k.. The result gives us an equation by which we might better design the experiment.

The dimensions, L and D are fixed as are all the variables save Th1 and Fw . What are the best choices for these variables?

Dimensionless form for the solution.

We can group parameters as θ, so that

and the temperature rise can be expressed simply as

If we calculate the temperature rise as a function of flow rate we can obtain the following table. 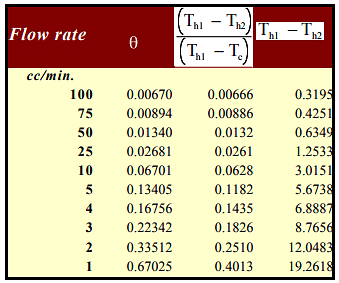 In an experiment we can measure temperature no more precisely that 0.1 °F so that the highest flow rate would be 5 ml/min.