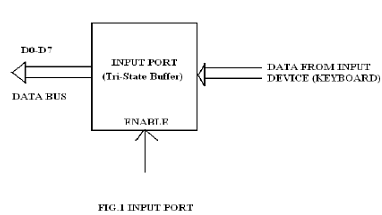 In telecommunications, serial transmission is the sequential transmission of signal elements of a group representing a character or other entity of data. Digital serial transmissions are bits sent over a single wire, frequency or optical path sequentially.Because it requires less signal processing and less chance for error than parallel transmission, the transfer rate of each individual path may be faster. This can be used over longer distances as a check digit or parity bit can be sent along it easily.

In this technique, a CPU automatically executes one of a collection of special routines whenever certain condition exists within a program or a processor system. Example CPU gives response to devices such as keyboard, sensor and other components when they request for service. When the CPU is asked to communicate with devices, it services the devices. Example each time you type a character on a keyboard, a keyboard service routine is called. It transfers the character you typed from the keyboard I/O port into the processor and then to a data buffer in memory.

The interrupt driven I/O technique allows the CPU to execute its main program and only stop to service I/O device when it is told to do so by the I/O system as shown in fig.3.This method provides an external asynchronous input that would inform the processor that it should complete whatever instruction that is currently being executed and fetch a new routine that will service the requesting device. Once this servicing is completed, the processor would resume exactly where it left off.

An analogy to the interrupt concept is in the classroom, where the professor serves as CPU and the students as I/O ports. The classroom scenario for this interrupt analogy will be such that the professor is busy in writing on the blackboard and delivering his lecture.