The document Introduction to Limits JEE Notes | EduRev is a part of the JEE Course Mathematics (Maths) Class 11.
All you need of JEE at this link: JEE

A. Definition of Limit

Let f be a function defined on an open interval containing c (except possibly at c) and let L be a real number. The statement

B. The Existence of a Limit

Let f be a function and let c and L be real numbers. The limit of f(x) as x approaches c is L if and only if

In other words limit of a function f(x) is said to exist as, x→a when

Ex.1 The graph of a function g is shown in the figure. Use it to state the values (if they exist) of the following 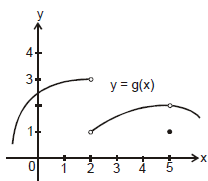 (c) Since the left and right limits are different, we conclude that  g(x) does not exist.

The graph also show that

(f) This time the left and right limits are the same and so, we have

Despite this fact, notice that

The right and left-hand limits are equal. Thus, the limit exists and

The graph of f is shown in the figure.

Let b and c be real numbers, let n be a positive integer, and let f and g be functions with the following limits.

Ex.4 Evaluate the following limits and justify each step.

(b) We start by using laws of limit, but their use is fully justified only at the final stage when we see that the limits of the numerator and denominator exist and the limit of the denominator is not  0.

Three of the most common types of behaviour associated with the non-existence of a limit.

1. f(x) approaches a different number from the right side of c than it approaches from the left side.

2. f(x) increases or decreases without bound as x approaches c.

There are many other interesting functions that have unusual limit behaviour. An often cited one is the Dirichlet function f(x)

This function has no limit at any real number c.

Ex.5 Which of the following limits are in indeterminant forms. Also indicate the form

(i)   ‘0’ doesn’t means exact zero but represent a value approaching towards zero similarly to ‘1’ and infinity.