The document Introduction to Nomenclature Notes | EduRev is a part of the JEE Course Chemistry Class 11.
All you need of JEE at this link: JEE

Organic chemistry deals with millions of compounds. In order to clearly identify them, a systematic method of naming has been developed and is known as the IUPAC (International Union of Pure and Applied Chemistry) system of nomenclature. In this systematic nomenclature, the names are correlated with the structure such that the reader or listener can deduce the structure from the name.

Before the IUPAC system of nomenclature, however, organic compounds were assigned names based on their origin or certain properties. For instance, citric acid is named so because it is found in citrus fruits and the acid found in red ant is named formic acid since the Latin word for ant is formica. These names are traditional and are considered as trivial or common names. Some common names are followed even today. For example, Buckminsterfullerene is a common name given to the newly discovered C60 cluster (a form of carbon) noting its structural similarity to the geodesic domes popularised by the famous architect R. Buckminster Fuller. Common names are useful and in many cases indispensable, particularly when the alternative systematic names are lengthy and complicated. Common names of some organic compounds are given in Table.

Common or Trivial Names of Some Organic Compounds The IUPAC System of NomenclatureA systematic name of an organic compound is generally derived by identifying the parent hydrocarbon and the functional group(s) attached to it. See the example given below. By further using prefixes and suffixes, the parent name can be modified to obtain the actual name. Compounds containing carbon and hydrogen only are called hydrocarbons. A hydrocarbon is termed saturated if it contains only carbon-carbon single bonds. The IUPAC name for a homologous series of such compounds is alkane. Paraffin (Latin: little affinity) was the earlier name given to these compounds. Unsaturated hydrocarbons are those, which contain at least one carboncarbon double or triple bond.

Straight chain hydrocarbons: The names of such compounds are based on their chain structure, and end with suffix ‘-ane’ and carry a prefix indicating the number of carbon atoms present in the chain (except from CH4 to C4H10, where the prefixes are derived from trivial names). The IUPAC names of some straight chain saturated hydrocarbons are given in Table. The alkanes in Table differ from each other by merely the number of -CH2 groups in the chain. They are homologues of alkane series. Branched chain hydrocarbons: In a branched chain compound small chains of carbon atoms are attached at one or more carbon atoms of the parent chain. The small carbon chains (branches) are called alkyl groups. For example: 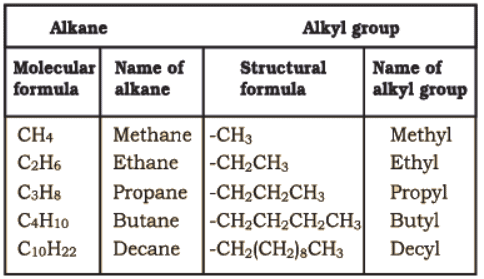 Abbreviations are used for some alkyl groups. For example, methyl is abbreviated as Me, ethyl as Et, propyl as Pr and butyl as Bu. The alkyl groups can be branched also.

Thus, propyl and butyl groups can have branched structures as shown below. Common branched groups have specific trivial names. For example, the propyl groups can either be n-propyl group or isopropyl group. The branched butyl groups are called sec-butyl, isobutyl and tert-butyl group. We also encounter the structural unit, –CH2C(CH3)3, which is called neopentyl group.

Nomenclature of branched chain alkanes: We encounter a number of branched chain alkanes. The rules for naming them are given below.1. First of all, the longest carbon chain in the molecule is identified. In the example (I) given below, the longest chain has nine carbons and it is considered as the parent or root chain. Selection of parent chain as shown in (II) is not correct because it has only eight carbons. 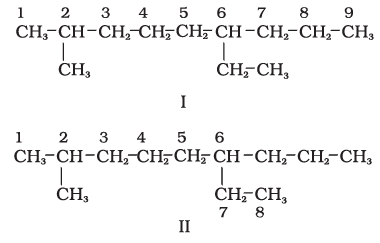 2. The carbon atoms of the parent chain are numbered to identify the parent alkane and to locate the positions of the carbon atoms at which branching takes place due to the substitution of alkyl group in place of hydrogen atoms. The numbering is done in such a way that the branched carbon atoms get the lowest possible numbers.

Thus, the numbering in the above example should be from left to right (branching at carbon atoms 2 and 6) and not from right to left (giving numbers 4 and  8 to the carbon atoms at which branches are attached). 3. The names of  alkyl groups attached as a branch are then prefixed to the name of the parent alkane and position of the substituents is indicated by the appropriate numbers. If different alkyl groups are present, they are listed in alphabetical order. Thus, name for the compound shown above is: 6-ethyl-2-methylnonane. [Note: the numbers are separated from the groups by hyphens and there is no break between methyl and nonane.]4. If two or more identical substituent groups are present then the numbers are separated by commas. The names of identical substituents are not repeated, instead prefixes such as di (for 2), tri (for 3), tetra (for 4), penta (for 5), hexa (for 6) etc. are used. While writing the name of the substituents in alphabetical order, these prefixes, however, are not considered.

Thus, the following compounds are named as: 5. If the two substituents are found in equivalent positions, the lower number is given to the one coming first in the alphabetical listing. Thus, the following compound is 3-ethyl-6-methyloctane and not 6-ethyl-3-methyloctane.

6. The branched alkyl groups can be named by following the above mentioned procedures. However, the carbon atom of the branch that attaches to the root alkane is numbered 1 as exemplified below. 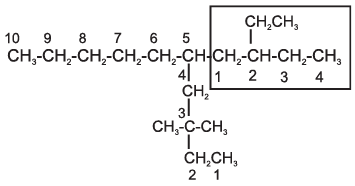 A saturated monocyclic compound is named by prefixing ‘cyclo’ to the corresponding straight chain alkane. If side chains are present, then the rules given above are applied. Names of some cyclic compounds are given below. 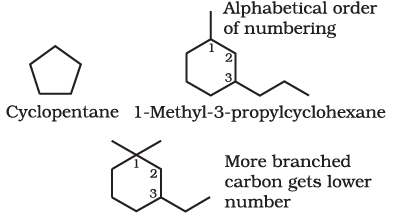