The document Introduction to Overheads - Cost Accounting B Com Notes | EduRev is a part of the B Com Course Cost Accounting.
All you need of B Com at this link: B Com

OverheadsOverhead may be defined as the cost of indirect material, indirect labour and such other expenses, including services, as cannot be conveniently charged direct to specific cost centres or cost units. It should be noted that direct costs(materials, labour, etc.) are associated with individual jobs or products. Indirect expenses or overheads are not associated with individual jobs or products; they represent the cost of the facilities required for carrying on the operations.
CIMA, London defines overhead as “Expenditure on labour, materials or services which can not be economically identified with a specific saleable cost unit”.
In modern industrial undertakings, overheads are a very large proportion of the total cost and, therefore, good deal of attention has to be paid to them. It will be a big mistake to pay attention only to direct cost. The problem in respect of overheads arises from the facts that the amount of overheads has to be estimated and that too before the concerned period begins (since it is only continuous costing that is found useful) and that, the amount has to be distributed over the various cost units, again on an estimated basis.

Collection of OverheadsWhen classification of overheads on some scientific and consistent basis is complete, overheads are regularly collected i.e. estimated under standing order code numbers allotted to them. For the collection of overhead expenses the following are some of the primary documents used:-

Indirect labour is obtained in the first place, from the time cards and pay rolls. Wages paid to workers against each standing order number can be obtained from the time tickets or job cards. From the time tickets, the wages analysis sheet is prepared each month and at the end of the month, the total is debited to Factory Overhead Control Account and credited to the Wages account.Indirect expense can come from several sources such as cash book, factory journals or vouchers. In the case of cash outlays, the entry may come from the cash book. Expenses such as depreciation and other adjustment items which do not result from cash outlays are taken from subsidiary records. At the end of the period, the total of factory overheads would be debited to Factory Overhead Control Account and credited to the Cost Ledger Control Account.Some expenses such as power, lighting, heating, rent, etc. may not be solely applicable to factory overheads, but should be apportioned between Factory expenses, Selling expenses and Administration expenses.

Each item of overheads may be seen and proper estimate of the amount for the coming period may be prepared. Another way, more expeditious, is to analyse the total overheads into fixed and variable and then arrive at the estimate by adjusting the variable amount by the expected change in output and the fixed amount by such changes as employment of more people, increments, etc.Importance of Overhead Costs:In various five-year plans, industrialisation was given due importance. The result is that a large number of establishments have grown up both in the public and private sectors for mass production for which use of improved and costlier and special type of machines has become absolutely necessary. With the increasing trend towards plant automation, heavy expenditure is being incurred which cannot be charged directly to any particular unit and can be called as cost common to all units of production.Overhead expenses being a significant proportion of the total cost have assumed an added importance and require analysis for purposes of cost ascertainment and control by function and for guidance in certain managerial decisions by the extent of the variability with production.Overhead costs cannot be allocated but have to be suitably apportioned and then absorbed by suitable methods. The cost accountant is required to pay so much attention to the accounting of overhead cost as prudence choice of various bases used for apportionment and absorbing the overheads in the cost of products has to be made by him.Classification of OverheadsThe process of classification of overheads involves:

The classification of overheads expenditure depends upon the type and size of a business and the nature of the product or service rendered.

Generally overheads are classified on the following basis:

1. Functional Analysis Overheads can be divided into the following categories on functional basis:(a) Manufacturing or production or factory overheads: Manufacturing overheads includes all indirect costs (indirect material, indirect labour and indirect expenses) incurred for operation of manufacturing or production division in a factory. It is also know as, factory overheads, works overheads, factory cost or works cost etc.(b) Administration overheads: It is the sum of those costs of general management, secretarial, accounting and administrative services, which cannot be directly related to the production, marketing, research or development functions of the enterprise. Administration overheads include the cost of formulating the policy, directing the organisation and controlling the operations of an undertaking which is not related directly to production, selling, distribution, research or development activity or function.(c) Selling and distribution overheads: Selling overheads is the cost of seeking to create and stimulate demand and of securing orders. It comprises the cost to products of distributors for soliciting and recurring orders for the articles or commodities dealt in and of efforts to find and retain customers. Distribution overhead is the expenditure incurred in the process which begins with making the packed product available for dispatch and ends with the making the reconditioned returned empty package, if any, available for re-use. It includes expenditure incurred in transporting articles to central or local storage. It also comprises expenditure incurred in moving articles to and from prospective customer as in the case of goods on sale or return basis. In case of gas, electricity and water industries distribution means pipes, mains and services which may be regarded as equivalent to packing and transportation.(d) Research and development overheads: Research overhead is incurred for the new product, new process of manufacturing any product. The development overhead is incurred for putting research result on commercial basis.Examples of different types of overheads

Fixed Overheads:Fixed overheads expenses are those which remain fixed in total amount with increases or decreases in volume of output or productive activity for a particular period of time, e.g. managerial remuneration, rent of building, insurance of building, plant etc. Fixed overhead costs remain the same from one period to another except when they are deliberately changed, e.g. increments granted to staff. The incidence of fixed overhead on unit cost decreases as production increases and vice versa.

Variable Overheads:Variable overhead costs are those costs which vary in total in direct proportion to the volume of output. For instance, if the output increases by 5%, the variable expenses also increase by 5%. Correspondingly, on a decline of the output it will also decline proportionately. Examples are indirect material and indirect labour. Variable overhead changes in total but its incidence on unit cost remains constant.

Semi-variable Overheads/ Step Cost:These overhead costs are partly fixed and partly variable. They are known as semi-variable overheads because they contain both fixed and variable element. Semi-variable overheads do not fluctuate in direct proportion to volume. They are also called Step Costs It may remain fixed within a certain activity level, but once that level is exceeded, they vary without having direct relationship with volume changes. Examples are depreciation, telephone charges, repair and maintenance of buildings, machines and equipment etc.

Semi-variable expenses usually have two parts—one fixed and other variable. For instance depreciation usually depends on two factors—one time (fixed) and other wear and tear (variable). The two together make depreciation (as a whole) semi-variable. An analytical study thus can make it possible for all semi-variable expenses to be split up into two parts. Fundamentally, therefore, there are only two types of expenses—fixed and variable.

Illustration 1:Following figures have been extracted from the books of a manufacturing company:

Plot the above information on the graph to enable you to ascertain the fixed overhead of the company assuming that the cost-volume-profit relationship has been maintained throughout these months.Solution: Illustration 2:Following data has been extracted from the records of a manufacturing company whose operations are varying from month to month.

Illustration 3:Following details are available from the records of a manufacturing company.

Assume a linear relationship between total cost and output for all three periods, calculate total cost for period 3.Solution. 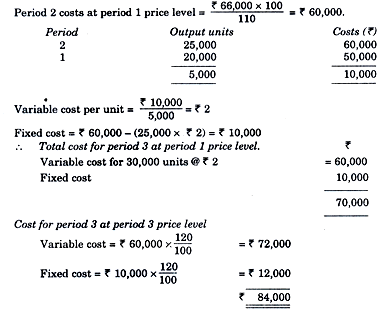