The history of paper making goes back to over 2000 years while first official report on the manufacture of paper was reported in China in 105 AD. The knowledge of paper manufacturing spread westward, along with the silk and trade routes, reaching India is round 605 AD. Pulp and paper production has increased globally and will continue to increase in the near future and is one of the largest manufacturing sectors in the world. Per capita consumption of paper is sometimes yardstick for measurement of industrialization. There are about 500 kraft mills and many thousands of other types of pulp and paper mills all over the world. Pulp and paper industry is one of the oldest industries in India.

With a 20 mills and installed capacity of one lakhs tonnes per annum at the time of independence the paper industry have made continuous strides and now there are about 380 mills with a production of 4.0 million tonnes.  There are about 6.5 billion people living on planet Earth. Worldwide paper consumption in this century has increased 4 times faster than population. Paper and paperboard worldwide will reach 400 million tones in 2011 and 640 million tones in 2020 with world population of 8000 million people and per capita consumption of paper and paperboard of 80 kg. There are about 500 Kraft mills and many thousands of other types of pulp and paper mills in the world.  India is fastest growing pulp and paper market in the world with growth rate of 10% over one year in per capita consumption, which is expected to grow in future.

Early 1970’sthe share of wood, agricultural residues and wastepaper was 84%, 9% and 7% and presently it constitutes 31%, 22% and 47% in comparison to globally 57%, 39% and 4% respectively.Out of about 11million tonnes Paper production in 2011-12 approximately 7.5 million tonnes is produced from agro residue and wastepaper and mainly contributed by medium and small scale paper mills. Itis projected thatconsumption and production of paper in next five years will be 16.5% and 14.8% million tonnes respectively.

Raw material and energy sources in Indian and European countries are given in Figure M-III 1.1. Specific energy consumption in Indian mills are higher than other developed countries (Table M-III1.2) 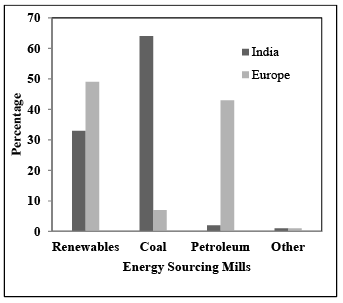 Technological turning point in the Indian paper industry is given below:

Advances in Pulp and Paper Industry

India has a landmass of 3.29 million square kilometers and 0.629 million sq km of forest i.e. nearly 2.5percent of world’s geographical area, only 1percent of the forest area supporting 16percent of world populations. Indian forestry is at a cross road, and actually only 12 percent land area has good forest cover against the official figure of 19 percent . With fast depletion of forest raw material, large integrated mill which accounts for about 38 percent of the total production are facing serious challenges and hardly there is any scope for substantial capacity expansion unless and until they go for secondary fibre utilization. Small and medium mills based on agro-based accounts for nearly 31 percent of India’s production. With depleting forest raw material, agricultural residues like bagasse wheat straw, rice straw, jute, grass etc. are likely to play important role in meeting the future demand of raw material for paper industry. Table M-III 1.3 gives the detail of raw material use by Small and Large Integrated Pulp and Paper Mills

Problems in Utilization of Hard Wood

Increased use of recycled fibre/paper is the current trend in the paper industry globally as it is one of survival routes for the paper industry against dwindling fibre resources and environmental related issues. Collection of domestic secondary fibre” an initiative as corporate social responsibility; shift in the raw material consumption pattern in India and Global paper recycling pattern is given in Table M-III 1.4 and Table M-III 1.5 respectively .

Potential source of waste paper are domestic refuse, industrial refuse, office refuse, trade refuse. In India around 65percent of paper industry requirement of waste paper is met through imports which is on increase year by year

As the residual lignin present in the pulp before chlorination is important factor affecting toxicity of bleach plant effluent, lowering the kappa number of pulp before entering bleach plant by extended delignification is the recommended option for reducing toxicity. Reduction in lignin content of pulp potentially results in reduction of chlorinated organic matter in the effluent. Some of the options for reducing kappa number of pulp before bleaching are extended delignification using polysulphide, oxygen, anthraquinone.

Oxygen delignification offers many advantages over the conventional delignification processes and there is steady growth in worldwide production of oxygen delignified pulp. These process are now capable of producing pulp with kappa number 30-50percent lower than conventional kraft cooking methods without significant yield or strength loss. In India some of the other mills have also switched over to oxygen delignification. Some of the advantages of oxygen delignification are – lower demand of bleaching chemicals; shorter bleaching sequences; reduction in bleach plant effluent BOD, COD, colour, toxicity and AOX; high yield; improved cleanliness of pulp by brightening shives, saving in equipment cost, reduced energy consumption, increase in efficiency of brown stock washing. Several other processes which are either in developmental or implementation stage are Alkalisulfate-anthraquinone method (ASAM), Organo-cell-water, methanol reinforced kraft pulping, bio-pulping .

Innovation in Technology for Waste Management

There have been significant innovation and developments in technology in pulp and paper manufacture to improve quality, minimize the energy consumption, reduce the toxicity of bleach plant effluent, waste water generation and reduce the colour in the effluent to improve better recycle. Pulping and bleaching is one of the major areas where major technological development has taken place in the pulp and paper industry. Some of the technological development in pulping and bleaching for reducing toxicity and waste generation are:

Control of outside              Elimination of use of defoamer containing dioxin

Process Technology in the Manufacture of Pulp and Paper