Sugar industry is one of the most important agro-based industries in India and has an important impact on rural economy. India is the first two largest sugar producing countries in the world sugar production during 2007-08 wasRs.263 lakh. There are 624 sugar factories in the country as on 31-03-2009. Sector wise breakup is as follows in Table M-V 1.1.

In 2010-11, sugarcane was planted in 4.98 million hectares across the country, of which 1 million hectares was in Maharashtra and over 2 million hectares in Uttar Pradesh, official estimates show. Uttar Pradesh and Maharashtra are the two largest sugarcane producing states in the country, accounting for more than 80percent of the annual crop production. India is one of the largest producers of alcohol in the world and there has been a steady increase in its production over the last 15 years, according to fresh statistics.

India is a dominant producer of alcohol in the South-East Asian region with 65percent of the total shares and contributes to around seven percent of the total alcohol beverage imports into the region. More than two-thirds of the total beverage alcohol consumption within the region is in India, according to figures in the newly compiled Alcohol Atlas of India. There has been a steady increase in the production of alcohol in the country, with the production doubling from 887.2 million liters in 1992-93 to 1,654 million liters in 1999-2000 and was expected to treble to 2300 million liters by 2007-08. Sugar industry is highly seasonal industry, with season lengths of about 6-18 weeks for beets and 20-32 weeks for cane

Sugar contains 70 percent water, 14 percent fibre, 13.3 percent saccharose (about 10-15percent sucrose) and 2.7 percent impurities. The yield of sugar depends mostly on the quality of cane and the efficiency of the extraction of juice crushing, milling and squeezing of juice through a series of pressure mills containing grooved walls Weak juice and make up water is added as extractant before squeezing to maximize juice yield. After crushing and extraction of juice, baggase is left as residue which is about 33.3 percent of the total cane crushed. Bagasse is used as fuel for boilers. However about 10percent of bagasse is available surplus which is used for paper making it can be also used for manufacture of alcohol.

Purification of juice for removal of impurities by addition of calcium phosphate followed by addition of lime to precipitate the impurities in the form of colloid. This followed by bubbling of SO2 for maximum flocculation of impurities. SO2 also acts as a bleaching agent. Further the flocculation of the impurities is achieved in the continuous settler. Double carbonation using CO2 and double sulphitation using SO2 is used. The Clarified solution goes to evaporator and the underflow of clarifier goes to rotary filter for removal of the impurities as cake. The filtrate containing sugar from the rotary filter is recycled. Clarified juice is concentrated in the in multiple effect evaporator to about 40 percent. The concentrated syrup is again bleached by passing SO2 through it. Concentrated sugar solution is then sent to vacuum pan where thickened syrup is boiled three to four times and then sent to crystallizer where separation of sugar crystal takes place. It is sent to high speed basket centrifuges for separation of sugar crystal. The syrup is re-concentrated and cooled successively to obtain one or two crops of crystal. The final mother liquor called molasses is sent to distilleries for production of alcohol by fermentation process. Schematics diagram of sugar production process is shown in Figure M-V 1.1.

Processing Sugar Beat: Sugar beat contains 75 percent water and about 17 percent sugar. In processing of beet first it is washed and sliced the slices are then go to rotary diffuser where a counter current flow of water is used to remove sugar from beet slices. Various stages in manufacture of sugar from sugar beets are: 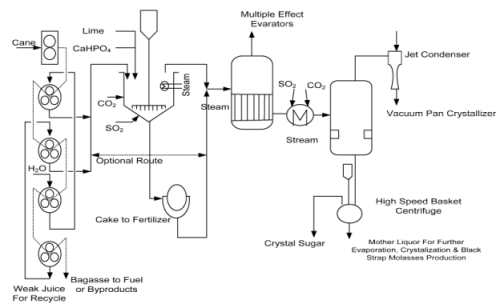 Juice Purification: The extracted juice is purified using lime and CO2 for removing non- sugar substance from the Juice.

Crystallisation:Crystallization of concentrated sugar solution to sugar crystal. Molasses are left behind after crystallization which is use for production of alcohol.

Refining Of the Raw Sugar:The raw sugar is dissolved, filters and crystallized again to get high grade refined sugar.

Ethanol India is amongst two largest sugar producing countries in the world and converts the molasses from sugar plant to alcohol. India is fourth largest producer of ethanol in the world and second largest in Asia. India produces about 2.75 billion liters alcohol annually. The demand for potable alcohol has been ever increasing . Today 95 percent of ethanol is produced by fermentation and only 5percent is produced from petroleum feed stock by ethylene route

Ethanol has become one of the important products as alternative feedstock for large number of organic chemicals and fuel. Ethanol is an oxygenated fuel that contains 35percent oxygen, which reduces particulate and NOx emissions from combustion. Alcohol is now being used for potable liquor, as chemical feed stock, as solvent and as oxygenates. Process manufacturing of alcohol is shown in Figure M-V 1.2.

Various routes for manufacture of ethanol are:

Molasses is the residue left after extraction of crystallised sugar and is one of the major byproducts of the sugar industry. Ethyl alcohol is made from molasses by fermentation process utilising yeast enzymes.

A typical distillery consist of

Fermentation involves fermentation of fermentable sugars by microorganism and formation of alcohol and other by-products. Yeast (Saccharomyces cerevisiae) is commonly used for the fermentation of glucose to ethanol. After the fermentation alcohol of 7-8percent strength is obtained. Fermentation is exothermic process and heat is generated. Removal of heat is necessary to maintain the temperature in fermenter. High temperature lowers the alcohol productivity. Nutrients are added to the fermenter intermittently depending upon the requirement. Sulphuric acid is added to adjust the pH of fermenter liquid. Excess foaming in the fermenter is controlled by antifoam solution. During the normal operation treated yeast cells recovered from the fermented wash are recycled from the yeast treatment system to activation vessel and after that transfer to the fermenter.

After fermentation is completed, the dil. liquor (8-10 percent alcohol) is preheated and pumped to the beer still where the alcohol 50-60 percent) and other volatiles like aldehydes are distilled off from the top and send to the aldehyde column for separation of aldehydes and other low boiling impurities. The residue from the bottom of the beer column is known as slops or tillage are discharged and treated for recovery of energy or concentrated and used. Alcohol drawn from side stream of the aldehyde column is sent to rectifying column. The azeotrop alcohol containing alcohol about 95-96 percent alcohol is taken as top side stream from the rectifying column. Alcohol recovery: this section involves the recovery of alcohol from the fermentation section to minimize the possible losses of alcohol along with generated CO2 and sludge from fermented. Typical reactions involved are

In India alcohol is mainly produced by the sugar and distilleries industries as a byproduct of molasses fermentation Technologies for producing ethanol from cellulosic biomass through fermentation and chemical hydrolysis have been developed from lab to commercial scale. Globally, if even 10 percent of biomass is used for fuel production there may be substantial reduction in oil consumption.

Ethanol thus produced can be a promising chemical feedstock. US based Primus green Energy has developed a high conversion efficiency biomass to gasoline process based on innovative thermal chemical conversion and the process can generate 416 litres of gasoline per tonne of biomass.

feed stocks in different parts of the world depend on climate and other environmental factors, agricultural practices, technological developments, and current usage/consumption. Composition of common agricultural residues and wastes is given in Table M-V 1.2.

Pretreatment of biomass is a prerequisite to the biological conversion of lignocellosic biomass to ethanol. Pretreatment is done either physically, chemically or biologically to make pretreated biomass more amenable to subsequent cellulose hydrolysis. Pretreatment alter the size and structure of the biomass as well as chemical composition. Figure M-V 1.3 shows process diagram of Biochemical Conversion Route of Biomass to Biofuels

Enzymatic hydrolysis of cellulose another route for alcohol. Enzymatic processes required pretreatment of lignocellulosic to break the crystalline structure of lignocellulosic and remove the lignin to expose the cellulose and hemicelluloses. Depending on the biomass material physical or chemical pretreatment methods may be used. Physical method may use high  temperature and pressure, milling, radiation or freezing. The chemical method uses a solvent to break apart and dissolve the crystalline structure.

Technological Barriers: Some of the technological barrier which needs to be addressed in efficient conversion of biomass to ethanol are:  Pretreatment, saccharification of cellulose and hemicelluloses matrix Simultaneous fermentation of hexose and pentose sugars.

Advantage of lignocelluloses for ethanol production: