THERMOCHEMISTRYChange in Internal energy in a chemical reaction:

If a chemical reaction takes place at constant temperature and constant volume. Then W = 0

Suppose VR & UP be the internal energy of reactant and products.then, ΔU = UP - UR= qv = Heat or enthalpy of reaction at constant volume

Change in Enthalpy a chemical reaction: Let qp be the heat exchange in the reaction at constant pressure. ThenΔH = qPIf HR & HP be the enthalpy of reactant and product then

Relation between Enthalpy of reaction at constant volume and a constant pressure:

The temperature dependence of enthalpy at constant pressure is:then

or d(DH) = DCPdT ...(1) The temperature dependence of enthalpy of constant volume is:

or ΔU2 - ΔU1 = ΔCV (T2 - T1 )Above equations are known as Kirchhoff equations.Problem.  Calculate ΔHo373 for the reaction

Carnot cycle: Consider the system is contained in a frictionless piston and cylinder arrangement. We also use two thermal reservoirs one at higher temperature T2 and other one at a lower temperature T1. 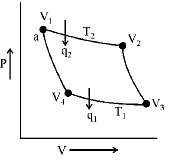 Four successive operations as given below:(1)  The isothermal reversible expansion from volume V1 to volume L at the higher temperature T2 .Since dT = 0, therefore, ΔU1 = 0 According to first law of thermodynamics, we have q2 = 2

(2)  The adiabatic reversible expansion from volume V2 to volume V3.Temperature of the system after expansion is T1. Since for adiabatic process q = 0, therefore, it follows that

Newt work involved in the cyclic process is:

Relationship between V1, V2, V3 & V4: Second and fourth process are adiabatic expansion and compression process then from poisson equation we get

Efficiency of Carnot cycle: It is denoted by η.

Problem. An engine operator in a Carnot cycle absorb 3.347 kJ at 400°C, how much work is done on the engine per cycle and how much heat is involved at 100°C in each cycle? Sol. The efficiency of Carnot cycle is