Forget everything you know about numbers.In fact, forget you even know what a number is.This is where mathematics starts.Instead of math with numbers, we will now think about math with "things".

DefinitionWhat is a set? Well, simply put, it's a collection.First we specify a common property among "things" (we define this word later) and then we gather up all the "things" that have this common property. For example, the items you wear: hat, shirt, jacket, pants, and so on. I'm sure you could come up with at least a hundred. This is known as a set.

Or another example is types of fingers. This set includes index, middle, ring, and pinky. set of fingers So it is just things grouped together with a certain property in common.

Notation
There is a fairly simple notation for sets. We simply list each element (or "member") separated by a comma, and then put some curly brackets around the whole thing:

The curly brackets { } are sometimes called "set brackets" or "braces".This is the notation for the two previous examples:{socks, shoes, watches, shirts, ...}
{index, middle, ring, pinky}Notice how the first example has the "..." (three dots together).The three dots ... are called an ellipsis, and mean "continue on".So that means the first example continues on ... for infinity.(OK, there isn't really an infinite amount of things you could wear, but I'm not entirely sure about that! After an hour of thinking of different things, I'm still not sure. So let's just say it is infinite for this example.)So:
The first set {socks, shoes, watches, shirts, ...} we call an infinite set,
the second set {index, middle, ring, pinky} we call a finite set.
But sometimes the "..." can be used in the middle to save writing long lists:
Example: the set of letters:
{a, b, c, ..., x, y, z}
In this case it is a finite set (there are only 26 letters, right?)

But in Calculus (also known as real analysis), the universal set is almost always the real numbers.

And in complex analysis, you guessed it, the universal set is the complex numbers.

Now you don't have to listen to the standard, you can use something like m to represent a set without breaking any mathematical laws (watch out, you can get π years in math jail for dividing by 0), but this notation is pretty nice and easy to follow, so why not?
Also, when we say an element a is in a set A, we use the symbol ∈ to show it.
And if something is not in a set use ∉.
Example: Set A is {1,2,3}. We can see that 1

Equality
Two sets are equal if they have precisely the same members. Now, at first glance they may not seem equal, so we may have to examine them closely!

Example: Are A and B equal where:

Let's check. They both contain 1. They both contain 2. And 3, And 4. And we have checked every element of both sets, so: Yes, they are equal!
And the equals sign (=) is used to show equality, so we write:
A = B
Example: Are these sets equal?

Yes, they are equal!
They both contain exactly the members 1, 2 and 3.
It doesn't matter where each  member appears, so long as it is there.

Subsets
When we define a set, if we take pieces of that set, we can form what is called a subset. 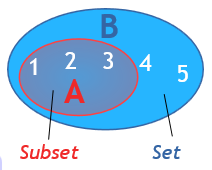 If we look at the defintion of subsets and let our mind wander a bit, we come to a weird conclusion.
Let A be a set.  Is every element in A an element in A?  (Yes, I wrote that correctly.)
Well, umm, yes of course, right?
So doesn't that mean that A is a subset of A?
This doesn't seem very proper, does it?  We want our subsets to be proper.  So we introduce (what else but)

B ("A is not a subset of B")
When we talk about proper subsets, we take out the line underneath and so it becomes A

B or if we want to say the opposite, A

Empty (or Null) Set
This is probably the weirdest thing about sets.
As an example, think of the set of piano keys on a guitar.
"But wait!" you say, "There are no piano keys on a guitar!"
And right you are.  It is a set with no elements.
This is known as the Empty Set (or Null Set).There aren't any elements in it.  Not one.  Zero.
It is represented by 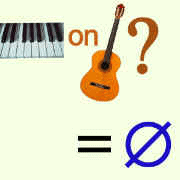 Some other examples of the empty set are the set of countries south of the south pole.
So what's so weird about the empty set?  Well, that part comes next.