Q. 265. A parallel-plate capacitor with area of each plate equal to S and the separation between them to d is put into a stream of conducting liquid with resistivity p. The liquid moves parallel to the plates with a constant velocity v. The whole system is located in a uniform magnetic field of induction B, vector B being parallel to the plates and perpendicular to the stream direction. The capacitor plates are interconnected by means of an external resistance R. What amount of power is generated in that resistance? At what value of R is the generated power the highest? What is this highest power equal to?

Solution. 265. Resistance of the liquid between the plates = pd/S

Current through the plates

Q. 266. A straight round copper conductor of radius R = 5.0 mm carries a current I = 50 A. Find the potential difference between the axis of the conductor and its surface. The concentration of the conduction electrons in copper is equal to n = 0.9.1023  cm-3.

Solution. 266. The electrons in the conductor are drifting with a speed of,

where e = magnitude of the charge on the electron, n = concentration of the conduction electoms.The magnetic field inside the conductor due to this current is given by,

A radial electric field vBφ must come into being in equilibrium. Its P.D. is,

Q. 267. In Hall effect measurements in a sodium conductor the strength of a transverse field was found to be equal to E = 5.0 µV/cm with a current density j = 200 A/cm2 and magnetic induction B = 1.00 T. Find the concentration of the conduction electrons and its ratio to the total number of atoms in the given conductor.

Atomic weight of Na being 23 and its density ≈ 1, molar volume is 23 c.c. Thus number o f atoms per unit volume is

Thus there is almost one conduction electron per atom.'

Q. 268. Find the mobility of the conduction electrons in a copper conductor if in Hall effect measurements performed in the magnetic field of induction B = 100 mT the transverse electric field strength of the given conductor turned out to be η = 3.1.103  times less than that of the longitudinal electric field.

Q. 269. A small current-carrying loop is located at a distance r from a long straight conductor with current I. The magnetic moment of the loop is equal to pm. Find the magnitude and direction of the force vector applied to the loop if the vector pm (a) is parallel to the straight conductor; (b) is oriented along the radius vector r; (c) coincides in direction with the magnetic field produced by the current I at the point where the loop is located.

Solution. 269. Due to the straight conductor,

We use the formula,

is parallel to the straight conductor.

because neither the direction nor the magnitude of

is oriented along the radius vector

is parallel to the direction at r. Thus only the cp component of

coincides in direction with the m agnetic field, produced by the conductor carrying current I

Q. 270. A small current-carrying coil having a magnetic moment pm  is located at the axis of a round loop of radius R with current I flowing through it. Find the magnitude of the vector force applied to the coil if its distance from the centre of the loop is equal to x and the vector pm, coincides in direction with the axis of the loop.

Q. 271. Find the interaction force of two coils with magnetic moments p1m = 4.0 mA• m2 and p2m = 6.0 mA• m2 and collinear axes if the separation between the coils is equal to l = 20 cm which exceeds considerably their linear dimensions.

Q. 272. A permanent magnet has the shape of a sufficiently thin disc magnetized along its axis. The radius of the disc is R = 1.0 cm. Evaluate the magnitude of a molecular current I' flowing along the rim of the disc if the magnetic induction at the point on the axis of the disc, lying at a distance x = 10 cm from its centre, is equal to B = 30 μT. 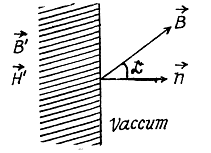 side l located as shown in the figure.

so, nonvanishing only in the bottom half of the spare.

Only Jn contributes the surface integral and

Solution. 275. Inside the cylindrical wire there is an external current of density

This gives a magnetic  field Hφ with

The total molecular surface current is,

The two currents have opposite signs.

Q. 276. Half of an infinitely long straight current-carrying solenoid is filled with magnetic substance as shown in Fig. 3.75. Draw the approximate plots of magnetic induction B, strength H, and magnetization I on the axis as functions of x.

Solution. 276. We can obtain the form of the curves, required here, by qualitative arguments.

B is continuous at x = 0, H is not These give the required curves as shown in the answer-sheet.

Q. 277. An infinitely long wire with a current I flowing in it is located in the boundary plane between two non-conducting media with permeabilities µ1 and µ2. Find the modulus of the magnetic induction vector throughout the space as a function of the distance r from the wire. It should be borne in mind that the lines of the vector B are circles whose centres lie on the axis of the wire

Solution. 277. The lines of the B as well as H field are circles around the wire. Thus 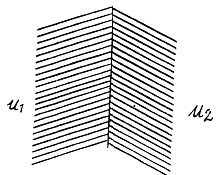 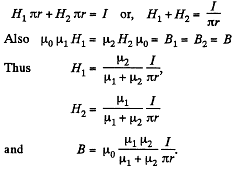 Solution. 278. The medium I is vacuum and contains a circular current carrying coil with current l. The medium II is a magnetic with permeability μ. The boundary is the plane z = 0 and the coil is in the plane z = l.To find the magnetic induction, we note that the effect of the magnetic medium can be written as due to an image coil in II as far as the medium I is concerned. On the other hand, the induction in II can be written as due to the coil in I, carrying a different current. It is sufficient to consider the far away fields and ensure that the boundary conditions are satisfied there. Now for actual coil in medium l, 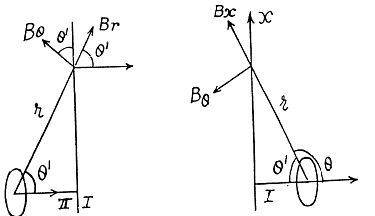 Similarly due to the image coil,

As far as the medium II is concerned, we write similarly

The boundary conditions are,

In the limit, when the coil is on the boundary, the magnetic field enverywhere can be  obtained by takin g the current to be

Solution. 279. We use the fact that with in an isolated uniformly magnetized ball,

the m a gn etiza tion vector. Then in a uniformmagnetic  field with induction

we have by superposition,

Q. 280. N = 300 turns of thin wire are uniformly wound on a permanent magnet shaped as a cylinder whose length is equal to l = 15 cm. When a current I = 3.0 A was passed through the wiring the field outside the magnet disappeared. Find the coercive force Hc of the material from which the magnet was manufactured.

Solution. 280. The coercive force Hc is just the magnetic field within the cylinder. This is by circulation theorem, 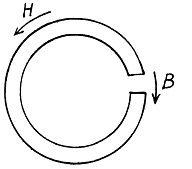 Neglecting the fringing of the lines of force, we write this as

The sense of H is opposite to B

Q. 282. An iron core shaped as a tore with mean radius R = 250 mm supports a winding with the total number of turns N = 1000. The core has a cross-cut of width b = 1.00 mm. With a current I = 0.85 A flowing through the winding, the magnetic induction in the gap is equal to B = 0.75 T. Assuming the scattering of the magnetic flux at the gap edges to be negligible, find the permeability of iron under these conditions.

Q. 283. Fig. 3.76 illustrates a basic magnetization curve of iron (commercial purity grade). Using this plot, draw the permeability μ. as a function of the magnetic field strength H. At what value of H is the permeability the greatest? What is μmax, equal to? 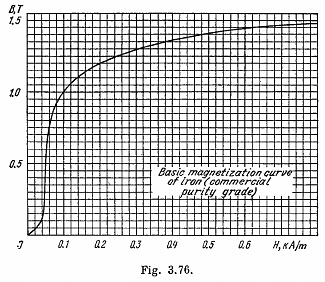 versus H from the given graph. The μ - H graph starts out horizon tally, and then rises steeply at about H = 0.04 k A / m before falling agian.

Q. 284. A thin iron ring with mean diameter d = 50 cm supports a winding consisting of N = 800 turns carrying current I = 3.0 A. The ring has a cross-cut of width b = 2.0 mm. Neglecting the scattering of the magnetic flux at the gap edges, and using the plot shown in Fig. 3.76, find the permeability of iron under these conditions.

Solution. 284. From the theorem on circulation of vector

where B is in Tesla and H in kA/m. Besides, B and H are interrelated as in the Fig. 3.76 of the text. Thus we have to solve for B, H graphically by simultaneously drawing the two curves (the hysterisis curve and the straight line, given above) and find the point of intersection. It is at

predominantly along the x-axis,

Q. 286. In the arrangement shown in Fig. 3.77 it is possible to measure (by means of a balance) the force with which a paramagnetic ball of volume V = 41 mm3 is attrabted to a pole of the electromagnet M. The magnetic induction at the axis of the poleshoe depends on the height x as B = B0 exp (—ax2), where B0  = 1.50 T, a = 100 m-2 . Find: (a) at what height xn., the ball experiences the maximum attraction; (b) the magnetic susceptibility of the paramagnetic if the maximum attraction force equals Fmax  =1 60 μN.

Solution. 286. The force in question is,

since B is essentially in the x-direction,

This is maximum when its derivative vanishes

The maximum force is

Q. 287. A small ball of volume V made of paramagnetic with susceptibility χ was slowly displaced along the axis of a current-carrying coil from the point where the magnetic induction equals B out to the region where the magnetic field is practically absent. What amount of work was performed during this process?

This force is attractive and an equal force must be applied for balance. The work done by applied forces is,