Q. 184. Find a potential difference φA — φB  between the plates of a capacitor C in the circuit shown in Fig. 3.47 if the sources have emf's

Solution. 185. Let us distribute the currents in the paths as shown in the figure. 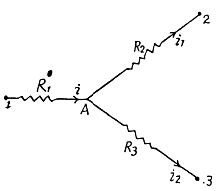 Solution. 186. Current is as shown. From Kirchhoffs Second law

Solution. 187. From the symmetry of the problem, current flow is indicated, as shown in the figure.

Equivalent resistance between the terminals A and B using (1) and (2),

On integrating the expression (5) between suitable limits,

Solution. 189. (a) As current i is linear function of time, and at t = 0 and Δt, it equals i0 and zero respectively, it may be represented as,

(b) Obviously the current through the coil is given by

And hence, heat generated in the circuit in the time interval t [0, ∞],

Q. 190. A de source with internal resistance R0 is loaded with three identical resistances R interconnected as shown in Fig. 3.52. At what value of R will the thermal power generated in this circuit be the highest?

Solution. 190. The equivalent circuit may be drawn as in the figure. 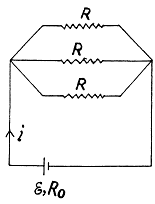 Let, us assume that e.m.f. of the cell is then current

Q. 191. Make sure that the current distribution over two resistances R1 and R2 connected in parallel corresponds to the minimum thermal power generated in this circuit.

Solution. 191. We assume current conservation but not KirchhofTs second law. Then thermal power dissipated is

This corresponds to usual distribution of currents over resistance joined is parallel.

loaded with an external resistance produces a current I = 1.0 A. In this case the potential difference between the terminals of the storage battery equals V = 2.0 V. Find the thermal power generated in the battery and the power developed in it by electric forces.

Solution. 192. Let, internal resistance of the cell be r, then

where i is the current in the circuit. We know that thermal power generated in the battery.

Minus sign means that this is generated not consumed.

Q. 193. A voltage V is applied to a de electric motor. The armature winding resistance is equal to R. At what value of current flowing through the winding will the useful power of the motor be the highest? What is it equal to? What is the motor efficiency in this case?

Solution. 193. As far as motor is concerned the power delivered is dissipated and can.be represented by a load, R0 . Thus

This is maximum when R0 = R and the current / is then

The maximum power delivered is

The power input is

and its value when P is maximum is

The efficiency then is

Q. 194. How much (in per cent) has a filament diameter decreased due to evaporation if the maintenance of the previous temperature required an increase of the voltage by η = 1.0%? The amount of heat transferred from the filament into surrounding space is assumed to be proportional to the filament surface area.

Solution. 194. If the wire diameter decreases by δ then by the information given

heat lost through the surface, H.

Q. 195. A conductor has a temperature-independent resistance R and a total heat capacity C. At the moment t = 0 it is connected to a de voltage V. Find the time dependence of a conductor's temperature T assuming the thermal power dissipated into surrounding space to vary as q = k (T — T0), where k is a constant, T0 is the environmental temperature (equal to the conductor's temperature at the initial moment)

Solution. 195. The equation of heat balance is

where A is a constant. Clearly

Q. 196. A circuit shown in Fig. 3.53 has resistances R1 =  20Ω and R2 = 30 Q. At what value of the resistance Rx  will the thermal power generated in it be practically independent of small variations of that resistance? The voltage between the points A and B is supposed to be constant in this case.

For P to be independent of Rx,

The internal resistances of the sources are negligible. At what value of the resistance R will the thermal power generated in it be the highest? What is it equal to? 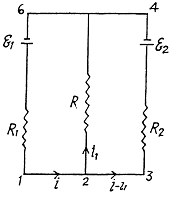 So, thermal power, generated in the resistance R,

For P to be maximum,

Solution. 198. Let, there are x number of cells, connected in series in each of the n parallel groups

Now, for any one of the loop, consisting of x cells and the resistor R, from loop rule 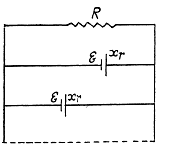 Heat generated in the resistor R,

Solution. 199. When switch 1 is closed, maximum chaige accumulated on the capacitor,

and when switch 2 is closed, at any arbitrary instant of time,

because capacitor is discharging.

Differentiating with respect to time,

When the switch (Sw) is at the position 1, the charge (maximum) accumalated on the capacitor is,

When the Sw is thrown to position 2, the capacitor starts discharging and as a result the electric energy stored in the capacitor totally turns into heat energy tho’ the resistors R1 and R2 (during a very long interval of time). Thus from the energy conservation, the total heat liberated tho the resistors.

During Hie process of discharging of the capacitor, the current tho’ the resistors and R2 is the same at all the moments of time, thus

Solution. 200. When the plate is absent the capacity of the condenser is

When it is present, the capacity is

(a) The energy increment is clearly.

(b) The charge on the plate is

has flown through the battery charging it and withdrawing

units of energy from the system into the battery. The energy of the capacitor has decreased by just half of this. The remaining half i.e.

must be the work done by the external agent in withdrawing the plate. This ensures conservation of energy.