Q. 331. Two thin concentric wires shaped as circles with radii a and b lie in the same plane. Allowing for a ≪ b, find: (a) their mutual inductance; (b) the magnetic flux through the surface enclosed by the outside wire, when the inside wire carries a current I.

Solution. 331. The direct calculation of the

is a rather complicated problem, since the configuration of the field itself is complicated. However, the application of the reciprocity theorem simplifies the solution of the problem. Indeed, let the same current i flow through loop 2. Then the magnetic flux created by this current through loop 1 can be easily found.

Magnetic induction at the centre of the loop,

and from reciprocity theorem,

Q. 332. A small cylindrical magnet M (Fig. 3.95) is placed in the centre of a thin coil of radius a consisting of N turns. The coil is connected to a ballistic galvanometer. The active resistance of the whole circuit is equal to R. Find the magnetic moment of the magnet if its removal from the coil results in a charge q flowing through the galvanometer.

The flux associated with this, when the magnet is along the axis at a distance x from the centre, is 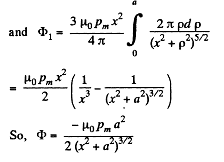 When the flux changes, an e.m.f.

induced and a current

flows. The total charge q, flowing, as the magnet is removed to infinity from x = 0 is,

Q. 333. Find the approximate formula expressing the mutual inductance of two thin coaxial loops of the same radius a if their centres are separated by a distance l, with l ≫ a.

Solution. 333. If a current l flows in one of the coils, the magnetic field at the centre of the other coil is,

The flux associated with the second coil is then approximately

Q. 334. There are two stationary loops with mutual inductance L12. The current in one of the loops starts to be varied as I1  = αt, where α is a constant, t is time. Find the time dependence I2 (t) of the current in the other loop whose inductance is L2 and resistance R.

Solution. 334. When the current in one of the loop is

This familiar equation has the solution,

which is the required current

= 3.0 V (Fig. 3.96). A resistance R0  = 2.0 Ω is connected in parallel with the coil. Find the amount of heat generated in the coil after the switch Sw is disconnected. The internal resistance of the source is negligible.

Solution. 335. Initially, after a steady current is set up, the current is flowing as shown. 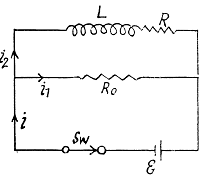 When the switch is disconnected, the current through R0 changes from i10 to the right, to i20 to the left. (The current in the inductance cannot change suddenly.). We then have the equation,

The heat dissipated in the coil is,

Q. 336. An iron tore supports N = 500 turns. Find the magnetic field energy if a current I = 2.0 A produces a magnetic flux across the tore's cross-section equal to

Solution. 336. To find the magnetic field energy we recall that the flux varies linearly with current Thus, when the flux

for current i, we can write

The total energy inclosed in the field, when the current is /, is

The characteristic factor 1/2  appears in this way.

Q. 337. An iron core shaped as a doughnut with round cross-section of radius a = 3.0 cm carries a winding of N = 1000 turns through which a current I = 1.0 A flows. The mean radius of the doughnut is b = 32 cm. Using the plot in Fig. 3.76, find the magnetic energy stored up in the core. A field strength H is supposed to be the same throughout the cross-section and equal to its magnitude in the centre of the cross-section. 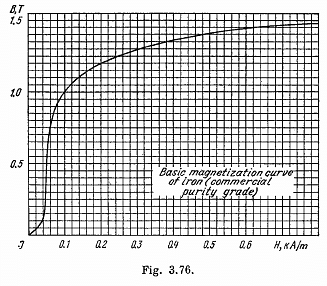 Q. 338. A thin ring made of a magnetic has a mean diameter d = 30 cm and supports a winding of N = 800 turns. The crosssectional area of the ring is equal to S = 5.0 cm2. The ring has a cross-cut of width b = 2.0 mm. When the winding carries a certain current, the permeability of the magnetic equals μ = 1400. Neglecting the dissipation of magnetic flux at the gap edges, find: (a) the ratio of magnetic energies in the gap and in the magnetic; (b) the inductance of the system; do it in two ways: using the flux and using the energy of the field.

Since B is continuous across the gap, B is given by,

both in the magnetic and the gap.

The L, found in the one way, agrees with that, found in the other way. Note that, in calculating the flux, we do not consider the field in the gap, since it is not linked to the winding. But the total energy includes that of the gap.

Q. 339. A long cylinder of radius a carrying a uniform surface charge rotates about its axis with an angular velocity ω. Find the magnetic field energy per unit length of the cylinder if the linear charge density equals λ, and μ, = 1.

Solution. 339. When the cylinder with a linear charge density λ rotates with a circular frequency co, a surface current density (charge / length x time) of 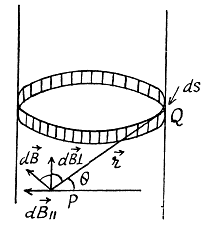 is the direction of the current. In magnitude,

and the  direction of

cancels out by cylindrical symmetry. The component that survives is,

the total solid angle around any point.

The magnetic field vanishes outside the cylinder by similar argument.

The total energy per unit length of the cylinder is,

Q. 340. At what magnitude of the electric field strength in vacuum the volume energy density of this field is the same as that of the magnetic field with induction B = 1.0 T (also in vacuum).

for the electric field,

for the magnetic field.

Q. 341. A thin uniformly charged ring of radius a = 10 cm rotates about its axis with an angular velocity ω = 100 rad/s. Find the ratio of volume energy densities of magnetic and electric fields on the axis of the ring at a point removed from its centre by a distance l = a. 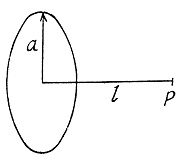 To get the magnetic field, note that the rotating ring constitutes a current i - q ω/2 π, and the corresponding magnetic field at P is,

Q. 342. Using the expression for volume density of magnetic energy, demonstrate that the amount of work contributed to magnetization of a unit volume of para- or diamagnetic, is equal to A = — JB/2.

Solution. 342. The total eneigy of the magnetic field is,

The second term can be interpreted as the energy of magnetization, and has the density

Solution. 343. (a) In series, the current I flows through both coils, and the total e.m.f. induced, when the current changes is,

(b) In parallel, the current flowing through either coil is

the e.m.f. induced is

Q. 344. Two solenoids of equal length and almost equal crosssectional area are fully inserted into one another. Find their mutual inductance if their inductances are equal to L1 and L2.

Q. 345. Demonstrate that the magnetic energy of interaction of two current-carrying loops located in vacuum can be represented as

are the magnetic inductions within a volume element dV, produced individually by the currents of the first and the second loop respectively.

Solution. 345. The interaction energy is

the magnetic field produced by the first of the current carrying loops, and

that of the second one, then the magnetic field due to both the loops will be

Q. 346. Find the interaction energy of two loops carrying currents I1 and I2 if both loops are shaped as circles of radii a and b, with a ≪ b. The loops' centres are located at the same point and their planes form an angle θ between them.

Solution. 346. We can think of the smaller coil as constituting a magnet of dipole moment,

Its direction is normal to the loop and makes an angle θ with the direction of the magnetic field, due to the bigger loop. This magnetic Geld is,

The interaction energy has the magnitude,

Its sign depends on the sense of the currents.

Q. 347. The space between two concentric metallic spheres is filled up with a uniform poorly conducting medium of resistivity p and permittivity ε. At the moment t = 0 the inside sphere obtains a certain charge. Find: (a) the relation between the vectors of displacement current density and conduction current density at an arbitrary point of the medium at the same moment of time; (b) the displacement current across an arbitrary closed surface wholly located in the medium and enclosing the internal sphere, if at the given moment of time the charge of that sphere is equal to q.

Solution. 347. (a) There is a radial outward conduction current Let Q be the instantaneous charge on the inner sphere, then,

The surface integral must be - ve because

Q. 348. A parallel-plate capacitor is formed by two discs with a uniform poorly conducting medium between them. The capacitor was initially charged and then disconnected from a voltage source. Neglecting the edge effects, show that there is no magnetic field between capacitor plates.

A general solution of this equation is

can be thought of as an  extraneous extraneous magnetic field. If it is zero,

Q. 349. A parallel-plate air condenser whose each plate has an area S = 100 cm2  is connected in series to an ac circuit. Find the electric field strength amplitude in the capacitor if the sinusoidal current amplitude in lead wires is equal to Im. = 1.0 mA and the current frequency equals ω = 1.6-107  s-1.

is the amplitude of the electric field and is 7V / cm

Q. 350. The space between the electrodes of a parallel-plate capacitor is filled with a uniform poorly conducting medium of conductivity σ and permittivity ε. The capacitor plates shaped as round discs are separated by a distance d. Neglecting the edge effects, find the magnetic field strength between the plates .at a distance r from their axis if an ac voltage V = Vm, cos cot is applied to the capacitor.

Solution. 350. The electric field between the plates can be written as,

This gives rise to a conduction current,

and a displacement current,

The total current is,

on taking the real part of the resultant.

The corresponding magnetic field is obtained by using circulation theorem,

Q. 351. A long straight solenoid has n turns per unit length. An alternating current I = Im sin ωt flows through it. Find the displacement current density as a function of the distance r from the solenoid axis. The cross-sectional radius of the solenoid equals R.

Solution. 351. Inside the solenoid, there is a magnetic field,

Since this varies in time there is an associated electric field. This is obtained by using,

The associated displacement current density is,

The answer, given in the book, is dimensionally incorrect without the factor ε0.