Q.328. Water flows out of a big tank along a tube bent at right angles: the inside radius of the tube is equal to r = 0.50 cm (Fig. 1.87). The length of the horizontal section of the tube is equal to l = 22 cm. The water flow rate is Q = 0.50 litres per second. Find the moment of reaction forces of flowing water, acting on the tube's walls, relative to the point O.

Solution. 328. Let the velocity of water flowing through the tube at a certain instant of time be u, then

where Q is the rate of flow of water and πr2 is the cross section area of the tube. 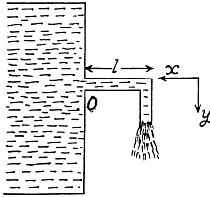 From impulse momentum theorem, for the stream of water striking the tube comer, in x-direction in the time interval dt,

Therefore, the force exerted on the water stream by the tube,

According to third law, the reaction force on the tube’s wall by the stream equals

Hence, the sought moment of force about 0 becomes

Q.329. A side wall of a wide open tank is provided with a narrowing tube (Fig. 1.88) through which water flows out. The cross-sectional area of the tube decreases from S = 3.0 cm2  to s = 1.0 cm2. The water level in the tank is h = 4.6 m higher than that in the tube. Neglecting the viscosity of the water, find the horizontal component of the force tending to pull the tube out of the tank.

where y is the radius at the point P distant x from the vertex O. Suppose the velocity with which the liquid flows out is V at A, v at B and u at P. Then by the equation of continuity

The velocity v of efflux is given by 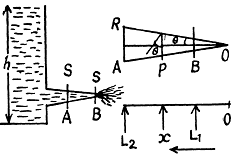 We have subtracted p0 which is the force due to atmosphenic pressure the factor sinθ gives horizontal component of the force and ds is the length of the element of nozzle surface, ds = dx sec θ and

Note : If we try to calculate F from the momentum change of the liquid flowing out will be wrong even as regards the sign of the force.

There is of course the effect of pressure at S and s but quantitative derivation of F fron Newton's law is difficult.

Q.330. A cylindrical vessel with water is rotated about its vertical axis with a constant angular velocity ω. Find: (a) the shape of the free surface of the water; (b) the water pressure distribution over the bottom of the vessel along its radius provided the pressure at the central point is equal to Po.

Solution. 330. The Euler’s equation is

in the space fixed frame where

downward. We assume incompressible fluid so p is constant.

where z is the height vertically upwards from some fixed origin. We go to rotating frame where the equation becomes

the additional terms on the right are the well known coriolis and centrifugal forces. In the frame rotating with the liquid

At the bottom z = constant

Q.331. A thin horizontal disc of radius R = 10 cm is located within a cylindrical cavity filled with oil whose viscosity η = 0.08 P (Fig. 1.89). The clearance between the disc and the horizontal planes of the cavity is equal to h = 1.0 mm. Find the power developed by the viscous forces acting on the disc when it rotates with the angular velocity ω = 60 rad/s. The end effects are to be neglected.

both in the upper and lower clearance. The corresponding force on the element whose radial width is dr is

The torque due to this force is

So power developed is

(A s instructed end effects i.e. rotation of fluid in the clearance r > R has been neglected.)

Solution. 332.  Let us consider a coaxial cylinder of radius r and thickness dr. then force of friction or viscous force on this elemental layer

This force must be constant from layer to layer so that steady motion may be possible.

Note : The force F is supplied by the agency which tries to carry the inner cylinder with velocity v0.

Q.333. A fluid with viscosity η fills the space between two long co-axial cylinders of radii R1 and R2, with R1 < R2. The inner cylinder is stationary while the outer one is rotated with a constant angular velocity ω2. The fluid flow is laminar. Taking into account that the friction force acting on a unit area of a cylindrical surface of radius r is defined by the formula

find: (a) the angular velocity of the rotating fluid as a function of radius r; (b) the moment of the friction forces acting on a unit length of the outer cylinder.

Solution. 333. (a) Let us consider an elemental cylinder of radius r and thickness dr then from Newton’s formula

and moment of this force acting on the element, 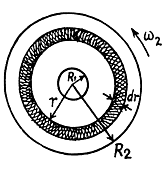 Q.334. A tube of length 1 and radius R carries a steady flow of fluid whose density is p and viscosity η. The fluid flow velocity de- pends on the distance r from the axis of the tube as

Find: (a) the volume of the fluid flowing across the section of the tube per unit time; (b) the kinetic energy of the fluid within the tube's volume; (c) the friction force exerted on the tube by the fluid; (d) the pressure difference at the ends of the tube.

Solution. 334. (a) Let dV be the volume flowing per second through the cylindrical shell of thickness dr then,

and the total volume,

(b) Let, dE be the kinetic energy, within the above cylindrical shell. Then

Hence, total energy of the fluid,

(c) Here frictional force is the shearing force on the tube, exerted by the fluid, which  equals

Then, viscous force is given by,

Let Δp be the pressure difference, then net force on the element

But, since the flow is steady, 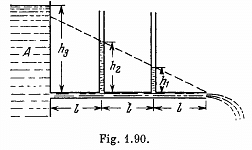 Q.336. The cross-sectional radius of a pipeline decreases gradually as

is the distance from the pipeline inlet. Find the ratio of Reynolds numbers for two cross-sections separated by Δx = 3.2 m.

(Reynold’s number at x1 from the pipe end)

is the velocity at distance x1

From equation of continuity,

Solution. 337. We know that Reynold’s number for turbulent flow is greater than that on laminar flow.

on putting the values.

Q.338. A lead sphere is steadily sinking in glycerin whose viscosity is equal to η = 13.9 P. What is the maximum diameter of the sphere at which the flow around that sphere still remains laminar? It is known that the transition to the turbulent flow corresponds to Reynolds number Re = 0.5. (Here the characteristic length is taken to be the sphere diameter.)

mm on putting the values,

Q.339. A steel ball of diameter d = 3.0 mm starts sinking with zero initial velocity in olive oil whose viscosity is η = 0.90 P. How soon after the beginning of motion will the velocity of the ball differ from the steady-state velocity by n = 1.0%?

The steady state velocity is  g/k.

We have neglected buoyancy in olive oil.