The document Irodov Solutions: Photometry and Geometrical Optics- 3 Notes | EduRev is a part of the Course Physics For JEE.

Q.41. Determine the focal length of a concave spherical mirror which is manufactured in the form of a thin symmetric biconvex glass lens one of whose surfaces is silvered. The curvature radius of the lens surface is R = 40 cm.

Q.42. Figure 5.9 illustrates an aligned system consisting of three thin lenses. The system is located in air. Determine: (a) the position of the pointof convergence of a parallel ray incoming from the left after passing through the system; (b) the distance between the first lens and a point lying on the axis to the leftof the system, at which that point and its image are located symmetrically with respect to the lens system. 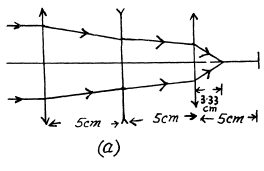 Applying lens formula for the first lens, considering a ray coming from infinity,

and so the position of the image is 5 cm to the right of the second lens, when only the firstone is present, but the ray again gets refracted while passing through the second, so

O1 and O2 must be symmetrically located with respect to the lens L2 and since this lens is concave, O1 must be at a distance

to be the left of L2, One can check that this satisfies lens equation for the third lens Ls

Q.43. A Galilean telescope of 10-fold magnification has the length of 45 cm when adjusted to infinity. Determine: (a) the focal lengths of the telescope's objective and ocular; (b) by what distance the ocular should be displaced to adjust the telescope to the distance of 50 m.

Ans. (a) Angular magnification for Galilean telescope in normal adjustment is given as.

The length of the telescope in this case.

Q.44. Find the magnification of a Keplerian telescope adjusted to infinity if the mounting of the objective has a diameter D and the image of that mounting formed by the telescope's ocular has a diameter d.

Ans. In the Keplerian telescope, in normal adjustment, the distance between the objective and eyepiece is f0 + fe . The image of the mounting produced by the eyepiece is formed at a distance v to the right where

The linear magnification produced by the eyepiece of the mounting is, in magnitude,

according to the problem so

Ans. It is clear from the figure that a parallel beam of light, originally of intensity l0 has, on emerging from the telescope, an intensity.

because it is concentrated over a section whose diameter is fe/fo of the diameter of the cross section of the incident beam.

Q.46. A Keplerian telescope with magnification

= 15 was submerged into water which filled up the inside of the telescope. To make the system work as a telescope again within the former dimensions, the objective was replaced.What has the magnification of the telescope become equal to? The refractive index of the glass of which the ocular is made is equal to n == 1.50.

Ans. W hen a glass lens is immersed in w ater its focal length increases approximately four times. We check this as follows as :

Now back to the problem. Originally in air

Q.47. At what magnification

of a telescope with a diameter of the objective D = 6.0 cm is the illuminance of the image of an objecton the retina not less than without the telescope? The pupil diameter is assumed to be equal to d0 = 3.0 mm. The losses of light in the telescope are negligible.

Where f = focal length of the eye lens. Thus the illuminance of the image on the retin (when the object is observed through the telescope) is

When the object is viewed directly, the illuminance is, similarly,

on substitution of the values.

Now, we know that, magnification of a microscope,

Since distance between objective and ocular has increased by 2 cm, hence it will cause the increase of tube length by 2cm.

Ans. It is implied in the problem that final image of the object is at infinity (otherwise light coming outof the eyepiece will not have a definite diameter).

But when the final image is at infinity, the magnification

in a microscope is given by

is the magnification produced by the microscope, then the area of the image produced on the retina (when we observe an object through a microscope) is:

Where u = distance of the image produced by the microscope from the eye lens, f = focal length of the eye lens and A = area of the object If  φ = luminous flux reaching the objective from the object and d = d0 so that the entire flux is admitted into the eye), then the illuminance of the final image on the retina

The condition for this is then

Q.50. Find the positions of the principal planes, the focal and nodal points of a thin biconvex symmetric glass lens with curvature radius of its surfaces equal to R = 7.50 cm. There is air on one side of the lens and water on the other.

Ans. The primary and secondary focal length of a thick lens are given as,

where φ is the lens power n , n' and n" are the refractive indices of first medium, lens material and the second medium beyond the lens.

are the powers of first and second spherical surface of the lens.

Now, power of a thin lens,

Since the distance between the primary principal point and primary nodal point is given as,

So, in this case,

Q.51. By means of plotting find the positions of focal points and principal planes of aligned optical systems illustrated in Fig. 5.10:

(b) a system of two thin converging lenses

(c) the positions F, F', and H' (Fig. 5.11c, where the path of the ray of light is shown before and after passing through the system).

(b) We let H stand for the principal point (on the axis). Determ ine H" by drawing a ray P'H" passing through P' and parallel to PH. One ray (conjugate to SH) can be obtained from this. To get the other ray one needs to know F or F" . This is easy because P and F are known. Finally we get S'.

Q.53. Suppose F and F' are the front and rear focal points of an optical system, and H and H' are its front and rear principal points. By means of plotting find the position of the image S' of the point S for the following relative positions of the points S, F, F', H, and H':

Ans.  Here we do not assume that the media on the two sides of the system are the same.

Ans. (a) Optical power of the system of combination of two lenses,

on putting the values,

Now, the position of primary principal plane with respect to the vertex of conveiging lens,

Similarly, the distance of secondary principal plane with respect to the vertex of diverging lens.

(b) The distance between the rear principal focal point F' and the vertex of conveiging lens,

Now , if f/l is maximum for certain value of d then f/l will be minimum for the same value of d. And for minimum f/l,

Q.55. Calculate the positions of the principal planes and focal points of a thick convex-concave glass lens if the curvature radius of the convex surface is equal to R1  = 10.0 cm and of the concave surface to R2 = 5.0 cm and the lens thickness is d = 3.0 cm.

Ans. The optical power of first convex surface is,

and the optical power of second concave surface is,

So, the optical power of the system,

Now , the distance of the primary principal plane from the vertex of convex surface is given as,

and the distance of secondary principal plane from the vertex of second concave surface,

Q.56. An aligned optical system consists of two thin lenses with focal lengths f1  and f2 the distance between the lenses being equal to d. The given system has to be replaced by one thin lens which, at any position of an object, would provide the same transverse magnification as the system. What must the focal length of this lens be equal to and in what position must it be placed with respect to the two-lens system?

Ans. The optical power of the system of two thin lenses placed in air is given as, 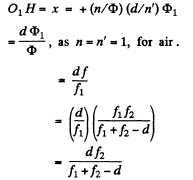 Now, if we place the equivalent lens at the primary principal plane of the lens system, it will provid e the same transverse magnification as the system. So, the distance of equivalent lens from the Vertex of the first lens is,

Ans. The plane mirror forms the image of the lens, and water, filled in the space between the two, behind the mirror, as shown in the figure.

= optical power of individual lens and n0 = R.I. of water.

n is the refractive index of glass.

and so, the optical power of whole system,

Ans. (a) A telescope in normal adjustment is a zero power conbination of lenses. Thus we require

Q.59. Find the positions of the principal planes, the focal length and the sign of the optical power of a thick convex-concave glass lens (a) whose thickness is equal to d and curvature radii of the surfaces are the same and equal to R; (b) whose refractive surfaces are concentric and have the curvature radii R1  and R2 (R2> R1).

Ans. (a) The power of the lens is (as in the previous problem)

Q.60. A telescope system consists of two glass balls with radii R1 = 5.0 cm and R2 = 1.0 cm. What are the distance between the centres of the balls and the magnification of the system if the bigger ball serves as an objective?

Ans. Let the optical powers of the first and second surfaces of the ball of radius R1 be

This ball may be treated as a thick spherical lens of thickness 2R1. So the optical power of this sphere is,

If the distance between the centres of these balls bed. Then the optical power of whole system,

Now, since this system serves as telescope, the optical power of the system must be equal to zero.

Since the diam eter D of the ob jective is 2R1 and thatof the eye-piece is d = 2R2 So, the magnification,

Q.61. Two identical thick symmetrical biconvex lenses are put close together. The thickness of each lens equals the curvature radius of its surfaces, i.e. d = R = 3.0 cm. Find the optical power of this system in air.

Ans. Optical powers of the two surfaces of the lens are

and optical power of the combination of these two thick lenses,

So, power of this system in air is,

Q.62. A ray of light propagating in an isotropic medium with refractive index n varying gradually from point to point has a curvature radius ρ determined by the formula

where the derivative is taken with respect to the principal normal to the ray. Derive this formula, assuming that in such a medium the law of refraction n sin θ = const holds. Here θ is the angle between the ray and the direction of the vector

at a given point.

Q.63. Find the curvature radius of a ray of light propagating in a horizontal direction close to the Earth's surface where the gradientof the refractive index in air is equal to approximately 3.10-8  m-1. At what value of that gradient would the ray of light propagate all the way round the Earth?