Q.1. Employing Thomson's model, calculate the radius of a hydrogen atom and the wavelength of emitted light if the ionization energy of the atom is known to be equal to E = 13.6 eV.

Ans. The Thomson model consists of a uniformly charged nucleus in which the electrons are at rest at certain equilibrium points (the plum in the pudding model). For the hydrogen nucleus the charge on the nudeus is +e while the chaige on the electron is -e. The electron by symmetry must be at the centre of the nuclear charge where the potential (from problem (3.38a)) is

where R is the radius of the nucleur charge distribution. The potential energy of the electron is

and since the electron is at rest, this is also the total eneigy. To ionize such an electron will require an energy of

From this we find

In Gaussian system the factor

Light is emitted when the electron vibrates. If we displace the electron slightly inside the nucleus by giving it a push r in some radial direction and an eneigy δE of oscillation then since the potential at a distance r in the nucleus is

the total eneigy of the nucleus becomes

This is the eneigy of a harmonic oscillator whose frequency is

The vibrating electron emits radiation of frequency ω whose wavelength is

In Gaussian units the factor

Putting the values we get

Q.2. An alpha particle with kinetic energy 0.27 MeV is deflected through an angle of 60° by a golden foil. Find the corresponding value of the aiming parameter.

Ans. Equation (6.1a) of the book reads in MKS units

(In Gaussian units there is no factor

Q.3. To what minimum distance will an alpha particle with kinetic energy T = 0.40 MeV approach in the case of a head-on collision to (a) a stationary Pb nucleus; (b) a stationary free Liz nucleus?

Ans.  (a) In the Pb case we shall ignore the recoil of the nucleus both because Pb is quite heavy

as well as because Pb in not free. Then for a head on collision, at the distance of closest approach, the K.E. of the α - particle must become zero (because α - particle will turn back at this point). Then

For the least distance of apporach, the second term on the right must be greatest which implies that the first term must vanish.

and other values we get

(In Gaussian units the factor

Q.4. An alpha particle with kinetic energy T = 0.50 MeV is deflected through an angle of θ = 90° by the Coulomb field of a stationary Hg nucleus. Find:

Ans. We shall ignore the recoil of Hg nucleus.

At A the motion is instantaneously circular because the radial velocity vanishes. Then if v0 is the speed of the particle at A, the following equations hold 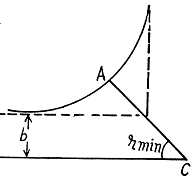 (This is Newton’s law. Here

is the radius of curvature of the path at A and p is minimum at A by symmetry. ρ Finally we have Eqn. (6.1 a) in the form

Solving for v0 we get

Q.5. A proton with kinetic energy T and aiming parameter b was deflected by the Coulomb field of a stationary Au nucleus. Find the momentum imparted to the given nucleus as a result of scattering.

Thus the momentum transfered td the gold nucleus is clearly 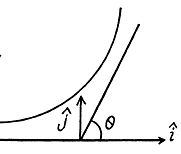 A lthough the momentum transfered to the Au nucleus is  not small, the energy associated with this recoil is quite small and its effect back on the motion of the proton can be neglected to a first approximation. Then

is normal to it on the side on which it is scattered. Thus

for the proton we get

Q.6. A proton with kinetic energy T = 10 MeV flies past a stationary free electron at a distance b = 10 pm. Find the energy acquired by the electron, assuming the proton's trajectory to be rectilinear and the electron to be practically motionless as the proton flies by.

and its magnitude is

is the component along OA of the force on electron. Thus

Evaluate the integral by substituting

In Gaussian units there is no factor

. Substituting the values we get

Q.7. A particle with kinetic energy T is deflected by a spherical potential well of radius R and depth Uo, i.e. by the field in which the potential energy of the particle takes the form

where r is the distance from the centre of the well. Find the relationship between the aiming parameter b of the particle and the angle 0 through which it deflects from the initial motion direction.

Ans.  See the diagram on the next page. In the region where potential is nonzero, the kinetic eneigy of the particle is, by eneigy conservation, ____________ T + U0 and the mom entum of the particle has the m agnitude

. . On the boundary the force is radial, so the tangential component of the momentum does not change :

Finally, the impact parameter is

Q.8. A stationary ball of radius R is irradiated by a parallel stream of particles whose radius is r. Assuming the collision of a particle and the ball to be elastic, find: (a) the deflection angle θ of a particle as a function of its aiming parameter b; (b) the fraction of particles which after a collision with the ball are scattered into the angular interval between θ and θ + dθ; (c) the probability of a particle to be deflected, after a collision with the ball, into the front hemispher

Ans.  It is implied that the ball is too heavy to recoil.

(a) The trajectory of the particle is symmetrical about the radius vector through the point of impact. It is clear from the diagram that 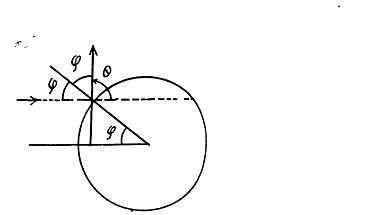 (b) With b defined above, the fraction of particles scattered between θ and θ + dθ (or the probability of the same) is

Q.9. A narrow beam of alpha particles with kinetic energy 1.0 MeV falls normally on a platinum foil 1.0 µm thick. The scattered particles are observed at an angle of 60° to the incident beam direction by means of a counter with a circular inlet area 1.0 cm2  located at the distance 10 cm from the scattering section of the foil. What fraction of scattered alpha particles reaches the counter inlet?

here. Also n = no. of Pt nuclei in the foil per unit area

Q.10. A narrow beam of alpha particles with kinetic energy T = = 0.50 MeV and intensity I = 5.0.105  particles per second falls normally on a golden foil. Find the thickness of the foil if at a distance r = 15 cm from a scattering section of that foil the flux density of scattered particles at the angle θ = 60° to the incident beam is equal to J = 40 particles/(cm2•s).

particles scattered per unit time per steradian in the given direction. Let n = concentration of the gold nuclei in the foil. Then

and the number of Au nuclei per unit area of the foil is nd where d = thickness of the foil Then from Eqn. (6.1 b) (note that n → nd here)

But since the foils have the same mass thickness ( = pd ) , we have

(b) This number is

where n is the concentration of nuclei in the foil.

Ans. The requisite probability can be written easily by analogy with (b) of the previous problem. It is

The integral is unity. Thus

Ans. Because of the

dependence of the scattering, the number of particles (or fraction) scattered through θ < θO cannot be calculated directly. But we can write this fraction as

where Q (θO) is the fraction of particles scattered through

. This fraction has been calculated before and is (see the results of 6.12 (b))

where n here is number of nuclei/cm2 . Using the data we get

Q.15. A narrow beam of protons with kinetic energy T = 1.4 MeV falls normally on a brass foil whose mass thickness pd = 1.5 mg/cm2. The weight ratio of copper and zinc in the foil is equal to 7 : 3 respectively. Find the fraction of the protons scattered through the angles exceeding θ0  = 30°.

Ans. The relevant fraction can be immediately written down (see 6.12 (b)) (Note that the projectiles are protons)

Q.16. Find the effective cross section of a uranium nucleus corresponding to the scattering of alpha particles with kinetic energy T = 1.5 MeV through the angles exceeding θ0  = 60°.

Ans. From the Rutherford scattering formula

we get the required cross section