The document Job Order Costing B Com Notes | EduRev is a part of the B Com Course Cost Accounting.
All you need of B Com at this link: B Com

Meaning of Job Order Costing:Job order costing is that form of specific order costing which applies where the work is undertaken as an identifiable unit such as:(i) Manufacture of products to customers’ specific requirements.(ii) Fabrication of certain materials where raw materials are supplied by the customers(iii) Repairs are done within a factory or at customers’ premises.(iv) Manufacturing goods are not for stock purposes but for immediate delivery once these are completed in all respects.(v) Internal capital expenditure jobs etc.Job costing is a method of cost accounting whereby cost is compiled for a specific quantity of product, equipment, repair or other service that moves through the production process as a continuously identifiable unit, applicable material, direct labour, direct expenses and usually a calculated portion of overheads being charged to a job order.Features of Job Order Costing:Under this method, costs are collected and accumulated for each job, work order or project separately. Each job can be separately identified and hence it becomes essential to analyse the costs according to each job.

The industries, where this method of costing is applied, must possess the following features:(i) The production is generally against customer’s order but not for stock.(ii) Each job has its own characteristics and needs special treatment.(iii) There is no uniformity in the flow of production from department to department. The nature of the job determines the departments through which the job has to be processed. The production is intermittent and not continuous.(iv) Each job is treated as a host unit under this method of costing.(v) Each job is distinctively identified by a production order throughout the production stage.(vi) The cost of production of every job is ascertained after the completion of the job.(vii) The work-in-progress differs from period to period according to the number of jobs in hand.Thus, cost is ascertained for each job separately. This method is applicable to printers, machine tools manufacturers, foundries, general engineering workshops, advertising, interior decoration and case making etc.Objectives of Job Order Costing:Following are the main objectives of job order costing:(i) It helps to find out the cost of production of every job or order and to know the profit or loss made on its execution. This ultimately helps the management to judge the profitability of each job and decide the future course of action.(ii) It helps the management to make more accurate estimates for costs of similar jobs to be executed in future on the basis of past records. Management can easily and accurately determine and quote prices of jobs of a similar nature which are in prospect.(iii) It helps the management to control the operational inefficiency by making a comparison of actual costs with estimated ones.(iv) It helps the management to provide a valuation of work-in-progress.

The following factors must be considered before adopting a system of job order costing:(a) Each job (or order) should be continuously identifiable from the stage of raw materials to completion stage.(b) This system should be adopted when it becomes absolutely necessary as it is very expensive and requires a lot of clerical work in estimating costs, designing and scheduling of production.Pre-Requisites for Job Order Costing:In order to achieve the purposes of job order costing a considerable amount of clerical work will be involved and to ensure effective and workable system, the following factors are necessary:(а) A sound system of production control.(b) Comprehensive works documentation, typically this includes: work order and/or operation tickets, bills of materials and/or materials requisitions, jig and tool requisitions etc.(c) An appropriate time booking system using either time sheets or piece work tickets.(d) A well organised basis to the costing system with clearly defines cost centres, good labour analysis, appropriate overhead absorption rates and a relevant issue pricing system.Advantages of Job Order Costing:Following are the advantages of job order costing:(i) It provides a detailed analysis of cost of materials, wages, and overheads classified by functions, departments and nature of expenses which enable the management to determine the operating efficiency of the different factors of production, production centres and the functional units.(ii) It records costs more accurately and facilitates cost control by comparing actual with estimates.(iii) It enables the management to ascertain which of the jobs are more profitable than the others, which are less profitable and which are incurring losses.(iv) It provides a basis for estimating the cost of similar jobs taken up in future and thus helps in future production planning.(v) Determination of predetermined overhead rates in job costing necessitates the application of a system of budgetary control of overheads with all its advantages.(vi) Identification of spoilage and defectives with the respective production orders and departments may enable the management to take effective steps in reducing these to the minimum.(vii) The detailed cost records of the past years can be used for statistical purposes in the determination of the trends of cost of the different types of jobs and their relative efficiencies.(viii) It is useful in quoting cost plus contract.Disadvantages of Job Order Costing:Following are the disadvantages of job order costing:(i) It involves a great deal of clerical work in recording daily the cost of materials issued, wages expended and overheads chargeable to each job or work order which adds to the cost of cost accounting. Thus it is expensive.(ii) The scope of committing mistakes is enough as the cost of one job may be wrongly posted to the cost of other job.(iii) Cost comparison among different jobs becomes difficult especially when drastic changes take place.(iv) Determination of overhead rates may involve budgeting of overhead expenses and the bases of overhead apportionment and absorption but unless such budgeting is complete i.e., extended to material, labour and expenses, its advantages are considerably reduced.(v) Job costing is historical costing which ascertains the cost of a job or product after it has been manufactured. It does not facilitate control of cost unless it is used with standard or estimated costing.Procedure of Job Order Cost System:A cost accounting system should be so designed that it would be able to provide the necessary information for achieving control of cost and performance. Thus it shows in detail their cost components of the total cost of executing a job which may take the form of either a special order or job or a batch of orders.A job cost sheet is prepared for every job which is undertaken on the basis of material requisition concerned. Labour cost on the basis of time clocked in respect of the job with the help of time tickets and factory overheads are added to these cost components according to some rational methods of overhead absorption.The total cost of a job as indicated by the job cost sheet consists partly of direct cost and partly of costs arrived at by assignment, allocation, apportionment and finally by absorption. Thus it is clear that similar jobs executed during a certain time period are bound to have different units of production. Unit cost is determined by dividing total cost by the number of units or a volume of goods produced there under.

The procedure for job order cost system may be summarised as follows:1. Receiving an Enquiry:The customer will usually enquire about the price, quality to be maintained, the duration within which the order is to be executed and other specification of the job before placing an order.

2. Estimation of the Price of the Job:The cost accountant estimates the cost of the job keeping in mind the specification of the customer. While preparing estimate, the cost of execution of similar job in the previous year and possible changes in the various estimates of cost are taken into consideration. The prospective customer is informed with the estimate of the job.

3. Receiving of Order:If the customer is satisfied with the quotation price and other terms of execution, he will then place the order.

4. Production Order:If the job is accepted, a Production Order is made by the Planning Department. It is in the form of instructions issued to the foreman to proceed with the manufacture of the product. It forms an authority for starting the work.It contains all the information regarding production. It is prepared with sufficient copies so that a copy of the same may be given to all the departmental managers or for man who are required to take any part in the production.

A specimen of production order is given below:

When an order is received, the Production Control Department allots a Production Order Number to it. Sometimes, the work may be sub-divided and sub-numbers may also be allotted to various works constituting it in addition to one master number.

5. Recording of Costs:The costs are collected and recorded for each job under separate Production Order Number. Generally, Job Cost Sheet (or Card) is maintained for each job. This is a document which is used to record direct material, direct wages and overheads applicable to respective jobs.

A specimen of Job Cost Sheet is as given below: 6. Completion of Job:On completion of a job, a completion report is sent to costing department. The expenditure under each element of cost is totalled and the total job cost is ascertained. The actual cost is compared with the estimated cost so as to reveal efficiency or inefficiency in operation.

7. Profit or Loss on Job:It is determined by comparing the actual expenditure or cost with the price obtained.Example and Solution.Job Costing Problem 1:

(a) Show the works cost and total cost, the percentages that the works overhead cost bears to the Manual and Machine Labour Wages and the percentage that the Establishment and General Expenses bear to the works cost.(b) What price should the Company quote to manufacture a machine which, it is estimated, will require an expenditure of Rs.8,000 in material and Rs.6,000 in wages, so that it will yield a profit of 25% on the total cost or 20% on the selling price.Solution. 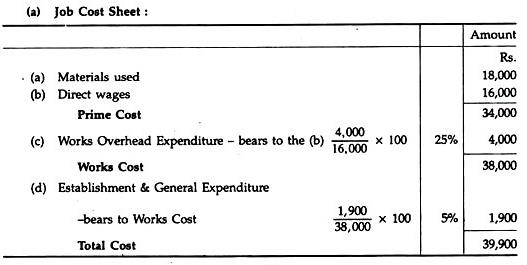 Job Costing Problem 2:The following direct costs were incurred on Job. No. 415 of Standard Radio Company: 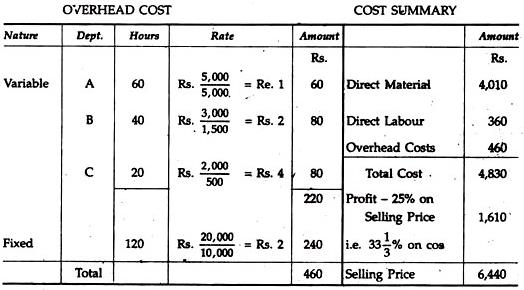 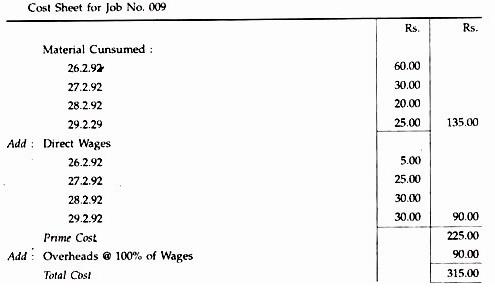 Prepare a comparative statement of cost showing the result of application of each of the above rates to Job No. 200 from the data given below: 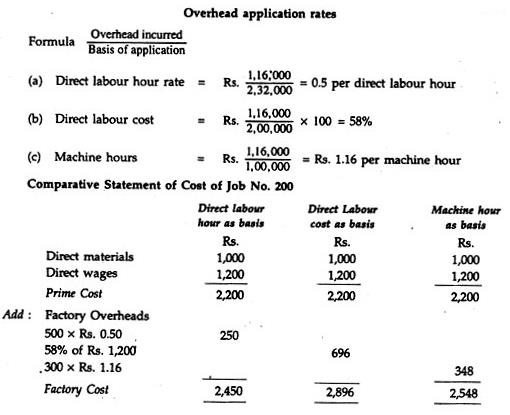 Job Costing Problem 5:The following is the budget of Joy Engineering works for the year 1993:

(i) From the above figures prepare the overhead application rates, using the following mathods :(a) Direct Labour Hours(b) Direct Labour Cost(c) Machine Hours(ii) Prepare a comparative statement of cost showing the result of application of each of the above rates to Job order No. 501 from the undermentioned data : 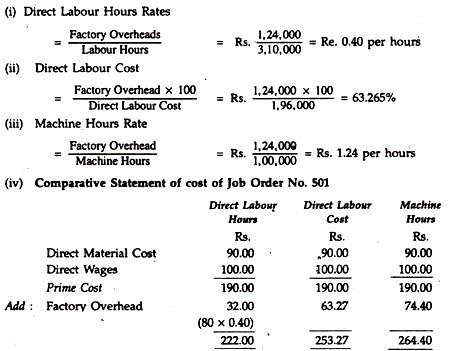