Majority carrier electrons in the n-region will begin diffusing into the p-region and majority carrier holes in the p-region will be diffusing into the n-region. If we assume there are no external excitation to the semiconductor, then this diffusion process cannot continue indefinitely. As electrons diffuse from the n-region, positively charged donor atoms are left behind. Similarly, as holes diffuse from the p-region, they uncover negatively charged acceptor atoms. The un-neutralized ions in the neighbourhood of the junction are referred to as uncovered charges. The general shape of the charge density ‘ρ’ depends upon how the diode is doped. Since the region of the junction is depleted of mobile charges, it is called depletion region, the space-charge region, or the transition region. 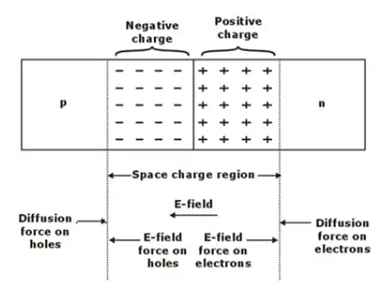 The net positive and negative charges in ‘n’ and ‘p’ regions induce an electric fields in the region near the metallurgical junction, in the direction from the positive to the negative charge, or from the n to the p region.Density gradients still exist in the exist in the majority carrier concentrations at each edge of the space charge region and producing a “diffusion force” that acts on the majority carriers as shown in Figure 1. The electric field in the space charge region produces another force on the electrons and holes which in the opposite direction to the diffusion force for each type of particle. In thermal equilibrium, the diffusion force and the field force exactly balance each other. 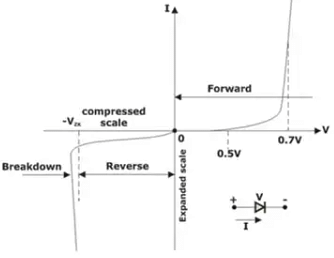 p-n Junction characteristic Note: When PN junction is reverse biased, the reverse voltage must be always less than breakdown voltage of device, otherwise the normal diode will be damaged.

Biasing of a Diode

The electric field across the junction has a fixed polarity called barrier potential or height of the barrier. A popular semiconductor device is formed using a p-n junction called p-n junction diode.

No Applied Bias (VD = 0V): In the absence of an applied bias voltage, the net flow of charge in anyone direction for a semiconductor diode is zero. 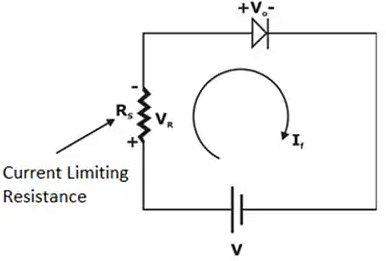 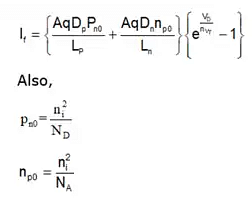 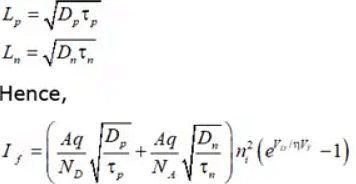 The reverse saturation current in the Forward bias diode i 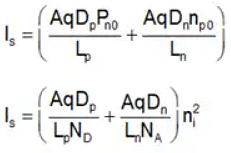 A = Cross Sectional Area of Junction 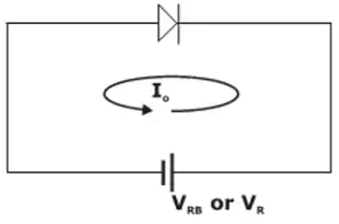 When PN junction is reverse biased, the width of the depletion layer increases.

Note: When PN junction is reverse biased the majority carries of P & N region will move away from the junction and this increases the region of IMMOBILE CHARGES i.e. the width of the depletion layer is increased.

We have found that a p-n junction biased in the reverse direction exhibits a small, essentially voltage-independent saturation current. This is true until a critical reverse bias is reached, for which reverse breakdown occurs [Fig. (18)]. At this critical voltage (VBr) the reverse current through the diode increases sharply, and relatively large currents can flow with little further increase in voltage. The existence of a critical breakdown voltage introduces almost a right-angle appearance to the reverse characteristic of most diodes. 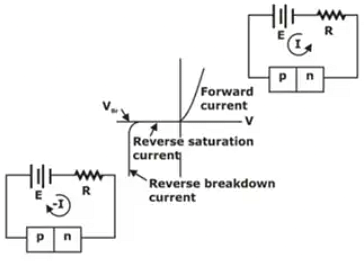 Reverse breakdown in a p-n Junction

The static resistance of a diode is defined as the ratio V/I of the voltage to the current. At any point on the volt-ampere characteristic of the diode the resistance Rf is equal to the reciprocal of the scope of a line joining the operating point to the origin.For small-signal operation the dynamic, or incremental, resistance r is defined as the reciprocal of the slope of the volt-ampere characteristic. RºdV/dI. For a semiconductor diode, we find from equation that the dynamic conductance where I is forward current.

for a forward bias greater than a few tenths of a volt, I >> I0 and r is given approximately by

Example 1: Find the voltage drop across each of the Silicon junction diodes shown in the figure below at room temperature. Assume that reverse saturation current flows in the circuit and the magnitude of the reverse breakdown voltage is greater than 5 Volts. 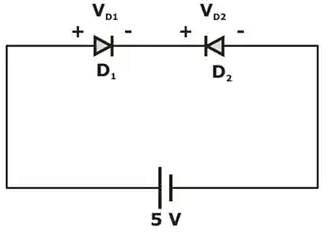 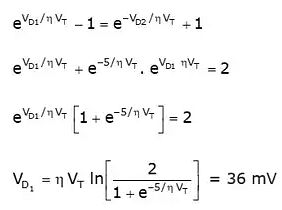 Where η is a constant dependent upon semiconductor, and VT is volt equivalent temperature and τ is the mean life-time of minority carriers.