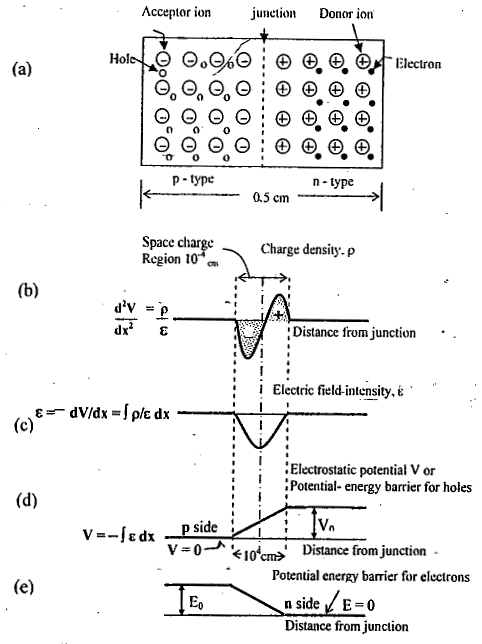 A schematic diagram of a p - n junction, including the charge density, electric field intensity, and potential - energy barriers at the junctions, (not drawn to scale.)

The P-N Junction as a Diode

Diode permits the easy flow of current in one direction but restrains the flow in die opposite direction.Forward Bias:

Band AND Structure Of An Open-Circuited PN Junction

This energy E0 represents the potential energy of the electrons at junction. 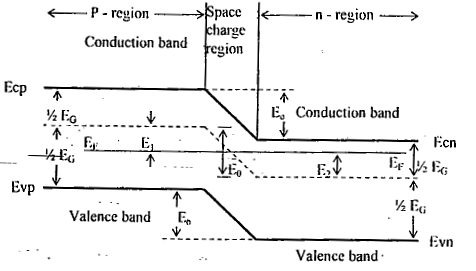 The E’s are expressed in electron volts and-k has the dimensions of electron volts per degree Kelvin. The Contact difference in potential V0 is expressed in volts and is numerically equal to E0 and it is depends only upon the equilibrium concentrations, and not at all upon the charge density in the transition region(space charge region).

Other expressions for E0 are 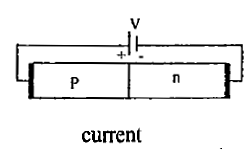 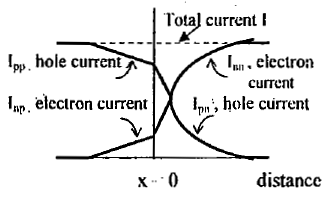 The hole and electron-current components vs, distance in a p-n junction diode. The space-charge region at the junction is assumed to be negligibly email

The Current Components in p-n Diode

Quantitative Theory of the P-N diode CurrentsIf the forward bias is applied to the diode, holes are injected from the p side into the n material. The concentration pn of holes in the n-side is increased above its thermal equilibrium value pno and, is given by 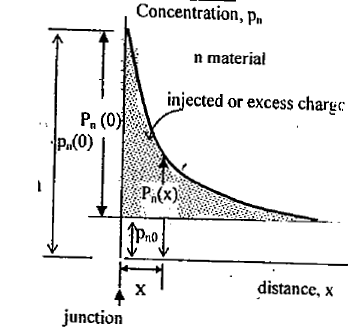 Defining the several components of hole concentration in the n side of a forward - biased diode.

Where the parameter Lp is called the diffusion length for holes in the n material.And the injected or excess concentration at x = 0 is

....(7)Taking the derivative of equation (6) and substituting in equation (7) we obtain

.... (8)This equation verifies that the hole current decreases exponentially with distance.Where q = charge of an electron

The Law of the Junction

(a) When the voltage V is positive and several times VT , the unity in the parenthesis of equation (13) may be neglected, i.e., ev/ηvT  >>1,∴ l = l0 ev/ηv TAccordingly except for a small range in the neighborhood of the origin, the current increases exponentially with voltage.

current” is therefore constant, independent of the applied reverse bias. Consequently, I0 is referred to as the “reverse saturation current”At a reverse biasing voltage Vz, the diode characteristic exhibits an abrupt and marked departure from (13). At this critical voltage a large reverse current flows, and the diode is said to be in the “break down region”. 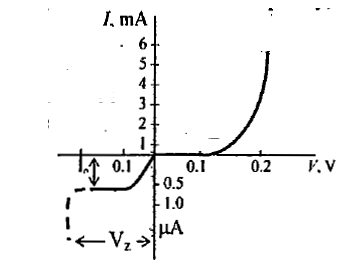 The volt-ampere characteristic for a germanium diode

The Cutin Voltage, Offset, break-point, or threshold voltage (Vy):Below Vy the current is very small (say, less than 1 per cent of max. rated voltage).Beyond Vy the current rises very rapidly. Vy = 0.2 V for Ge, 0.6V for Si.The reverse saturation current 10 in a Ge is normally larger by a factor of about 1000 than the 10 in a silicon diode of comparable ratings. Since n = 2 for small currents in Si, the 1 increases as eV/2VT only at higher voltages.The resistance R, cutin voltage Vy, power dissipation and noise margin of Germanium is less— than the silicon. But Germanium is not used in switching characteristics.The temperature dependence of p-n diode characteristics:The dependence of 10 on temperature T is given approximately byI0 = kTm e-v Go/ηvTWhere k is constant and qVGO (q is the magnitude of the electron charge) is the forbidden gap energy in Joules:For Ge : n = 1 m = 2 VGO = 0.785VFor Si: n = 2    m = 1.5 VGO = 1.21VTaking the derivative of the logarithm of above equation, we find

The 10 increases approximately 7 percent / °C for both Si and Ge. Since (1.07)10 ≈ 2.0, we conclude that the “reverse saturation current(Io)” approximately doubles for every 10°C rise in temperature.Consider a diode operating at room temperature (300°K) and just beyond the Vy.Then we find,

Since these data are based on “average characteristics”, it might be well for conservative design to assume a value of

dV / dT = -2.5 mV/°C ....(14)for either Ge or Si at room temperature.For Germanium, an increase in temperature from room temperature (25°C) to 90°C increases the 10 to hundreds of microamperes, although in Silicon at 100°C the 10 has increased only to some tenths of a micro ampere.