Karl Pearson’s Coefficient of Correlation The measure of degree of relationship between two variables is called the correlation coefficient. It is denoted by symbol r. The assumptions that constitute a bivariate linear correlation population model, for which correlation is to be calculated, includes the following-(ya-lun chou)1. Both X and Y are random variables. Either variable can be designated as the independent variable, and the other variable is the dependent variable.2. The bivariate population is normal. A bivariate normal population is, among other things, one in which both X and Y are normally distributed.3. The relationship between X and Y is, in a sense, linear. This assumption implies that all the means of Y’s associated with X values, fall on a straight line, which is the regression line of Y on X. And all the means of X’s associated with Y values, fall on a straight line, which is the regression line of X on Y. Furthermore, the population regression lines in the two equations are the same if and only if the relationship between Y and X is perfect- that is r = ± 1. Otherwise, with Y dependent, intercepts and slopes will differ from the regression equation with X dependent.This method is most widely used in practice. It is denoted by symbol V. The formula for computing coefficient of correlation can take various alternative forms depending upon the choice of the user.METHOD I — WHEN DEVIATIONS ARE TAKEN FROM ACTUAL ARITHMETIC MEAN (A) WHEN STANDARD DEVIATIONS ARE GIVEN IN THE QUESTION.

Example: 1Find correlation between marks obtained by 10 students in mathematics and statistics

Solution:Calculation of coefficient of correlation

Calculation by Method 1(a) 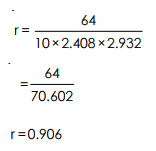 METHOD II WHEN DEVIATIONS ARE TAKEN FROM ASSUMED MEANThis method is generally used when actual mean of X series or of Y series or both are in decimals, in which case using method I becomes tedious; in such a case deviations are taken from assumed mean to simplify the calculations.

Since mean of X and Y are in decimals i.e. 11.5 and 12.1 respectively hence we would solve by method II 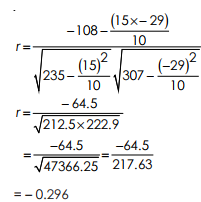 Example 3 : Find correlation between age of husband and age of wife. 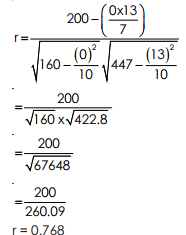 Properties of Coefficient of Correlation