The document Kepler's Laws of Planetary Motion Class 9 Notes | EduRev is a part of the Class 9 Course Science Class 9.
All you need of Class 9 at this link: Class 9 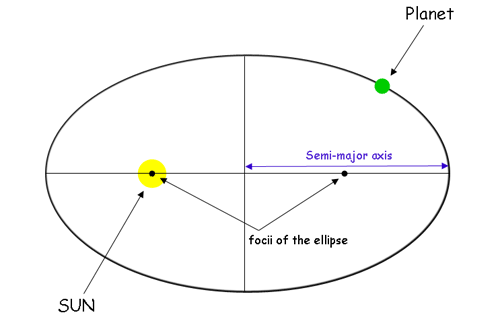 Each planet revolves around the sun in such a way that the line joining the planet to the sun sweeps over equal areas in equal intervals of time.

The cube of the mean distance of a planet from the sun is directly proportional to the square of time it takes to move around the sun.The law can be expressed as :

where r = Mean distance of planet from the sun and T = Time period of the planet (around the sun) Through Kepler gave the laws of planetary motion but he could not give a theory to explain the motion of planets. It was Newton who showed that the cause of the motion of planets is the gravitational force which the sun exerts on them. In fact, Newton used the Kepler's third law of planetary motion to develop the law of universal gravitation.

The force between two bodies is inversely proportional to the square of distance between them' is called the inverse-square rule.

Consider a planet of mass m moving with a velocity (or speed) v around the sun in a circular orbit of radius r, A centripetal force F acts on the orbiting planet (due to the sun) which is given by :

The mass m of a given planet is constant

If the planet takes time T to complete one revolution (of 2pr) around the sun, then its velocity v is given by:

The factor 2π is a constant

Now, taking square on both sides

is constant by Kepler's third law.

by putting 1/r  in place of v2 in relation

Newton's third law of motion also holds good for the force of gravitation. This means that when earth exerts a force of attraction on an object, then the object also exerts an equal force on the earth, in the opposite direction.

The mass of earth is very very large and acceleration produced in the earth very very small and cannot be detected with even the most accurate instrument available to us. 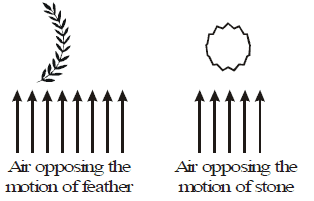 Any object dropped from some height always falls towards the earth. If a feather and a stone are dropped from the top of a tower, it is observed that feather falls onto the ground much later than the stone. So, it was thought that object of different masses dropped from same height take different times to reach the ground

However, Galileo dropped three iron balls of different masses simultaneously from the top of the tower of Pisa and found that all the three balls reached the earth's surface at the same time.

Conclusion: Galileo concluded that the bodies of different masses dropped simultaneously from the same height hit the ground at the same time, if air resistance is neglected.

This fact was verified experimentally by Robert Boyle just after the death of Galileo. Robert Boyle used his newly invented vacuum pump to evacuate the air from a long jar containing a lead bullet and a feather. Then he inverred the jar and found that both the bullet and the reached the bottom of the jar at the same time.

Acceleration due to Gravity

The acceleration with which a body falls towards the earth due to earth's gravitational pull is known as acceleration due to gravity. It is denoted by 'g'.Thus, all bodies irrespective of their masses fall down with constant acceleration.

To Calculate the Value of g

When a body of mass m is dropped from a certain distance R from the centre of earth of mass M, then the force exerted by the earth on the body is

For bodies falling near the surface of earth, this acceleration is called acceleration due to gravity and is represented by g.

Value of g on Moon

Mass of the Earth

We can determine mass of the earth from equation (A)

Average Density of the Earth

It can also be determined from equation (A) above.

Acceleration due to gravity on the moon,

Variation in the value of 'g'

1. Variation in the value of 'g' with the shape of the earth. 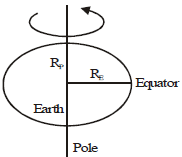 This expression for 'g' is calculated by considering the earth as a spherical body.

In fact, the earth is not sphereical in shape but it is egg shaped as shown in figure.

Therefore, the radius of the earth (R) is not constant throughout. Hence, the value of 'g' is different at different points on the earth.

The equatorial radius (RE) of the earth is about 21 km longer than its polar radius RP).

Now from equation (1), value of 'g' at equator is given by

Value of 'g' at pole is given by

Thus, value of 'g' is more at equator than at poles

2. Variation in the value of 'g' with the altitude (or height) above the surface of the earth. 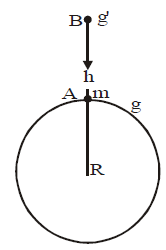 Therefore, acceleration due to gravity at height 'h' is given by

This shows that the value of 'g' decreases as we go higher and higher.

Thus, value of 'g' decreases with the height from the surface of the earth.

3. Variation in the value of 'g' with depth below the surface of the earth

The value of 'g' decreases with depth below the surface of the earth. 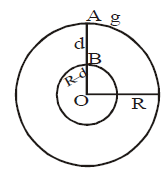 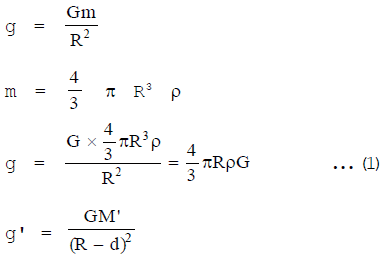 1. The acceleration due to gravity of a planet depends on its mass and its radius. Its value is high if mass is large and radius is small.2. The value of g at the surface of earth is 9.8 ms-2 on an average.

3. The value of g decreases with height.

4. The value of g decreases with depth.

5. The value of g is more at poles and less at equator.

6. The value of g is zero at the centre of the earth.

8. Acceleration due to gravity is independent of mass shape size etc of falling body i.e. there will be equal acceleration in a light and heavy falling body.

9. The rate of decrease of the acceleration due to gravity with height is twice as compared to that with depth.

10. If the rate of rotation of earth increases the value of acceleration due to gravity decreases at all places on the surface of the earth except at of poles.

Difference between "G" and "g"

When the bodies are falling under influence of gravity, they experience acceleration g i.e., 9.8 ms-2. However, when these are going up against gravity, they move with retardation of 9.8 ms-2. All the equations of motion already read by us are valid for freely falling body with the difference that a is replaced by g. For motions vertically upwards (a) is replased by (-g).