The Age of Social Change

The French Revolution opened up the possibility of creating a dramatic change in the way in which society was structured. Not everyone in Europe, however, wanted a complete transformation. Some were ‘conservatives’, while others were ‘liberals’ or ‘radicals’.

Liberals: Wanted a nation which tolerated all religions. They argued for an elected parliamentary government, subject to laws interpreted by a well trained judiciary that was independent of rulers and officials. They were not democrats.

Radicals: Wanted a nation in which government was based on the majority of a country’s population. They disliked concentration of property in hands of a few, not the existence of private property.

Conservatives: They resisted change. After the revolution they started accepting change provided it was slow and had links and respected the past. 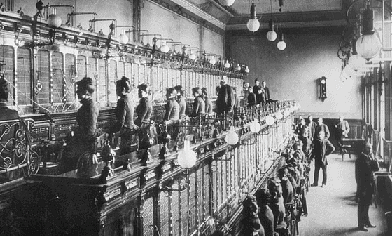 Industries and Social Change: This was the time of economic and social change. Men, women and children were pushed into factories for low wages, Liberals and radicals who were factory owners felt that workers’ efforts must be encouraged.

Socialism in Europe: Socialists were against private property. They had different visions of the future. Some believed in cooperatives, some demanded that governments must encourage cooperatives. Karl Marx and Friedrich Engels added that industrial society was capitalist. Marx believed that a socialist society would free the workers from capitalism. This would be a communist society.

Socialism Given Support: Workers in Germany and England began forming associations to fight for better living conditions. They set up funds for members in distress, reduction of working hours and right to vote. 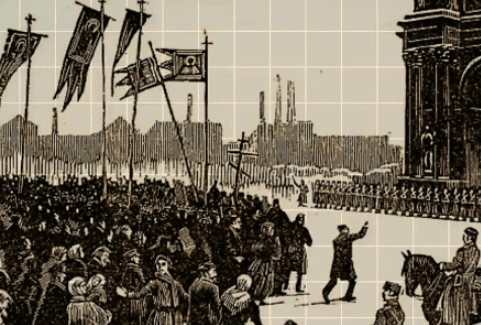 Economy and Society: Most of the Russian population were agriculturalist. Industries were being set up which was mostly private property of industrialists. Workers were divided into groups but they did unite to strike work when they were dissatisfied. Peasants had no respect for nobility, very unlike the French peasant. Russian peasants were the only peasant community which pooled their land and their commune divided it.

Socialism in Russia: All political parties were illegal in Russia before 1914. The Russian Socialist Democratic Labour Party was formed in 1900. It struggled to give peasants their rights over land that belonged to nobles. As land was divided among peasants periodically and it was felt that peasants and not workers would be the main source of the revolution. But Lenin did not agree with this as he felt that peasants were not one social group. The party was divided into Bolsheviks and Mensheviks.

The 1905 Revolution: Russia was an autocracy. The Tsar was not subject to the parliament. Liberals wanted to end this state of affairs. They worked towards demanding a constitution during the Revolution of 1905.

Bloody Sunday: Prices of essential goods rose so quickly by 1904 that the real wages 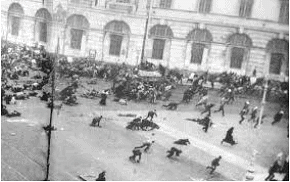 Fig. Bloody Sunday declined by 20%. During this time, four members of the Putilov Iron Works were dismissed. Action was called for. Over 110,000 workers in St. Petersburg went on strike demanding a reduction in working hours and increase in wages.

This procession was attacked by the police and Cossacks. Over 100 workers were killed. Strikes took place as a reaction. People demanded a constituent assembly. The Tsar allowed the creation of an elected consultative Parliament or Duma. The Tsar dismissed the first Duma within 75 days and announced the election of a second Duma.

The First World War and the Russian Empire: In Russia, the war was initially very popular but later the support grew thin. Anti-German sentiments ran high. Russian armies lost badly in Germany and Austria. There were 7 million casualties and 3 million refugees in Russia. The war also affected the industry. There was labour shortage, railway lines were shut down and small workshops were closed down. There was shortage of grain and hence of bread.

The February Revolution in PetrogradEvents 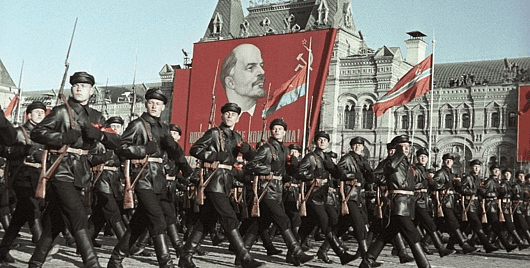 1. Tsar: Title given to the emperor of Russia which was abolished in 1917.2. Romanov: Name of the dynasty which ruled Russia in 1917.3. Communism: An economic system in which the means of production are owned by the state.4. Bolsheviks: The majority group of the Russian Social Democratic Labour Party led by Lenin based on the ideology of Marx and Engels. 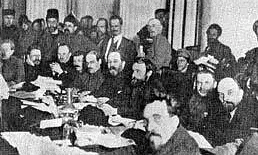 Fig. Bolsheviks at a meeting5. Soviet Union: The union of Soviet Socialist Republic (U.S.S.R) formed after the overthrow of the Tsarist Empire.6. Bloody Sunday: A mass of peaceful workers led by Father Gabon were fired upon by the Russian troops when they went to the Winter Palace to present a petition to the Tsar. Heavy casualties ensued. This incident which occurred on Sunday 22nd January, 1905 is known as Bloody Sunday.7. Council of People’s Commission: The council of representatives of people to whom power was transferred after the Russian Revolution. It was headed by Lenin.8. Duma:

Fig. Duma's outside viewThe Russian parliament or legislature. Its members were elected and charged with the responsibility of making laws.9. Divine Right Theory: The theory which believed that the king was the representative of God on earth and no one has the right to defy him. This theory was held by the Russian Tsar to perpetuate their autocratic rule.10. Mensheviks: The minority group of the Russian Social Democratic Labour Party formed in 1898. They favoured a government of the type that existed in countries like France and Germany.11. Nationalisation: To bring under government control.12. Red Army : The army of Revolutionary Russia which fought against the Tsar’s army. It was composed mainly of workers and peasants.13. Revolution of 1917: It refers to the events of November 1917. Control was in the hands of the All Russian Congress of Soviets. The Kerenskii’s government was overthrown.14. Serfdom: Russian type of feudalism under which peasants worked for the landlord in exchange for food and shelter. No wages were paid.15. Soviet: Council of workers.16. Suffragette: A movement to give women the right to vote.17. Jadidists: Muslim reformers within the Russian empire.18. Autonomy: The right to govern themselves.19. Deported: Forcibly removed from one’s own country.20. Exiled: Forced to live away from one’s own country.21. Collective Farms: A large farm owned by the government and worked by hundreds of workers.22. Requisition: When the government forcibly takes food or property from people, usually in wartime.23. Kulaks: Wealthy peasants or farmers.24. War Communism: The policy of the Russian government from mid- 1918 to 1921 was known as war communism. It was not one particular law or decree, but a whole series of measures designed to take control of the economy.25. New Economic Policy: Introduced in 1921, it made important changes in the way the Soviet economy was organised.26. Comintern: The Communist international is the organisation set up by Lenin to sponsor communist revolutions all over the world. 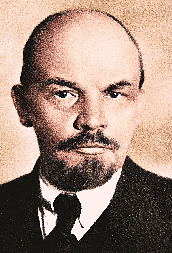 Fig. LeninThe leader of the Bolshevik Party who led the Russian Revolution in 1917. As a result of the Treaty of Brest-Litovsk with Germany, he withdrew Russia from the First World War and took various measures to make Russia a socialist state.2. Nicholas II: The Tsar of Russia whose Policies precipitated the Russian Revolution.3. Kerenskii: He leader of the Mensheviks party who wanted to establish a parliamentary form of government in Russia.4. Leon Trotsky: He headed the Petrograd Soviet and played a leading role in the Russian Revolution and was later assassinated by Stalin.5. Rasputin: An unscrupulous monk whose influence over the royal family was resented by the Russian people.6. Engels: Frederick Engels in association with Karl Marx published the Communist Manifesto that was the guiding spirit of the Russian Revolution.7. Rosa Luxemburg and Karl Liebknecht: Leaders of the German revolutionary movement, they tried a revolution in 1919. But the army crushed the revolution. Both were captured and shot.8. Joseph Stalin: He emerged as the leader of the Communist Party after the death of Lenin in 1924. He assumed complete control of Russian government and its policies till his death in 1953.