Kinematics is the geometry of Motion. Kinematics of fluid describes the fluid motion and its consequences without consideration of the nature of forces causing the motion.

The subject has three main aspects:

➢ Scalar: Scalar is a quantity that can be expressed by a single number representing its magnitude.Example: Mass, Density, and Temperature.

➢ Scalar Field: If at every point in a region, a scalar function has a defined value, the region is called a scalar field.Example: Temperature distribution in a rod.

➢ Vector: Vector is a quantity that is specified by both magnitude and direction.Example: Force, Velocity, and Displacement.

➢ Vector Field: If at every point in a region, a vector function has a defined value, the region is called a vector field.Example: Velocity field of a flowing fluid.

➢ Flow Field: The region in which the flow parameters i.e. velocity, pressure, etc. are defined at each and every point at any instant of time is called a flow field. Thus, a flow field would be specified by the velocities at different points in the region at different times.

is the position vector of a particle (with respect to a fixed point of reference) at a time t. (6.1)

can be expressed as:

and acceleration of the fluid particle can be obtained from the material derivatives of the position of the particle with respect to time.Therefore, 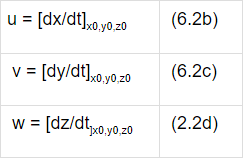 where u, v, w are the components of velocity in x, y, z directions respectively.

Similarly, for the acceleration, 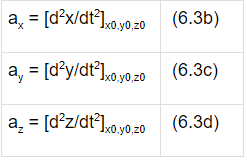 ➢ Mathematical representation of the flow field in the Eulerian method

(c) The relation between Eulerian and Lagrangian Method

The Eulerian description can be written as: