Kinetic theory is a basic mathematical modeling that bridges mechanics and

Postulates of kinetic theory of gases

Using laws of classical mechanics and statistical averaging one can find total energy of Ideal gases. We can use this theory to study viscosity, conduction, diffusion, effusion and Brownian motion.

2. A gas is made up of identical molecules, which behaves as rigid, perfectly elastic, hard sphere but considered as point mass .

The diameter of molecule is order of 10-10m at STP

3. The molecules continuously moves in random directions. All direction of motion are  equally probable.

5. The molecule of a gas exerts no force on each other except when they collide. These forces are due to only exchange of momentum during collision

6. The collision between molecules and with walls are perfectly elastic.

7. The molecular velocities are assumed to be uniformly distributed in all directions, which means velocity is isotropic symmetric and there is not any preferential direction.

8. The molecules move with all speeds ranging from 0 to ∞.

9. The time of collision is much less than the time between collisions.

Basic Statistical Formula to be used for Kinetic Theory:

If there is a sample random variable X =

And total number of variable is N , then some statistical phenomena is defined as Mean Value:

is identified as standard deviation

Example 1: Consider a system of particles and its velocities in one-dimension given in the table. 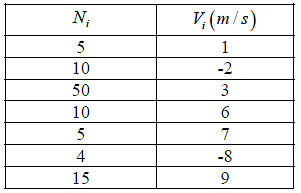 Pressure Exerted by a Gas

Suppose there are N molecules per cubic meter each of mass m and it is assumed that ni number of molecule have velocity vi .

, where vix,, viy and viz are x, y and z components of velocity of gases respectively 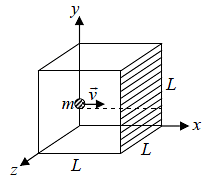 , that is about to collide with the shaded wall, where the time Δt between collisions is the time the molecule take to travel to the opposite wall and back again at speed vix.

From assumptions of kinetic theory of gases,

Suppose, molecules are kept in the cubic container of parameter L .

A molecule moving in the x - direction will have momentum mvix normal to face of the cube before collision.

Hence, the momentum Δpix delivered to the wall by the molecule during collision is

Force acting on the wall by molecule is

Pressure exerted on the walls of container by molecules,

So, the pressure in the x - direction exerted by all molecules is,

Average value of v2 is given by,

So, Px can be written as

where V is volume of the container and (v2) is average value of square of velocity.

At constant temperature (T), the pressure (P) of a given mass of a gas  is inversely proportional to its volume (V) i.e. 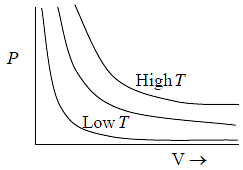 At constant pressure (P) the volume of a given mass of a gas is proportional to its temperature (T), V ∝ T. 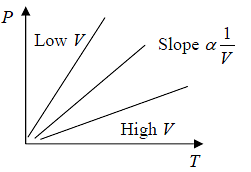 At constant volume (V) the Pressure of a given mass of a gas is proportional it temperature (T), P ∝ T.

At the same temperature and pressure, equal volume of all gases contain equal number of molecules (N)

other, the rate of diffusion (r) of each gas is inversely proportional to square root of density of gas (ρ)

Consider a sample of an Ideal gas at pressure P , volume V and temperature T, the gas follows the equation

where, n is the number of molecules and R is proportionality constant known as gas constant

According to the assumption of kinetic theory of gases, there is only translation motion of the molecule and there is not any potential acting between them, so

Average Energy (E) of gases are equivalent to average translational energy of a molecule i.e.

So, average kinetic energy is given by (E) =

, where  T is absolute temperature

Internal energy of gases with degree of freedom

Number of  independent coordinates required to specify its position correctly

Where N is number of particles and k is Total number of constraints. For a system in

At low temperature Diatomic molecule can be under stood by a model in which two points mass are connected by a mass less rod .so distance between both of particle is constant so k = 1

At high temperature Diatomic molecule can be under stood by a model in which two point mass are connected  by a mass less spring. Due to spring one extra mode of degree of freedom(one due to potential energy) will excited hence

So degree of freedom is f =

Example 5: Find the maximum attainable temperature of ideal gas in each process given by,

, where and P0 and α are positive constants, and V is the volume of one mole of gas.

Putting in equation (ii), one will get

Example 6: Two thermally insulated vessel 1 and 2 are filled with air. They are connected by a short tube with a valve. The volume of vessels and the pressure and temperate of air in them are

After opening the valve, let pressure, volume and temperature are P, V and T respectively.

Hence, system is isolated and thus,

Example 7: A horizontal cylinder closed from one end is rotated with a constant angular velocity ω about a vertical axis passing through the open end of the cylinder. The outside air pressure is equal to p0, the temperature equal to T and the molar mass of air equal to M. Find the air pressure as a function of the distance r from the rotation axis. The molar mass is assumed to be independent of r .

, if A is cross section area then 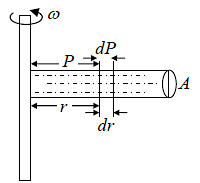 A molecule moving in the x direction will have momentum

normal to face of the cube before collision.

delivered to the wall by the molecule during collision is,

Force acting on the wall by molecule is

Pressure exerted on the walls of container by molecule is,

So, the pressure in the x - direction exerted by all molecules is,

Average value of v2 is given by,

So,Px can be written as

Example 9: It is possible to treat electromagnetic radiation in a container whose walls are mirror, as a gas of particle (photons) with a constant speed c and whose energy is related to their momentum p , which is directed parallel to their velocity by, E = pc . Show that if container is full of radiation, the equation of state is PV =

For photon v = c and velocity is parallel to momentum, so

which is equivalent to total distance travelled divided by total number of collision.

After collision they can be considered as one body system. Reduced mass,

and centre to centre distance,

Let the number of densities of these gases = n1 and n2

We construct a cylinder of cross section area πd2, length

Average speed characterizing maxwellian molecules when molecule of first type moves it collides will all the molecules of second type in the cylinder.

Total number of such collisions is given by

with mean path λ as parameter of gas.

The survival equation is shown in figure. 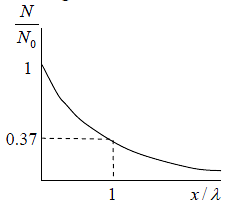 Example 10: The fraction of molecules that are undeflected is 1/2, then find the distance that undeflected particles will travel .

Example 11: In a sample of 1026 gas molecules, each molecule is moving with the same speed. Calculate the fraction of molecules that will continue to travel undeflected after traversing of λ,2λ,5λ and 10λ.

The values of f (x) are tabulated below for different below for distance traversed by the gas molecules and you can readily verify these using Eq.

To illustrate for x= λ we can write

When a gas is endowed with mass motion, random molecular motion can lead to transport of energy, momentum or mass, depending on the physical conditions, which lead to the phenomena of thermal conduction, viscosity and diffusion, respectively.

where m is the molecular mass and v' is the average speed of a molecule. At a given temperature, η is independent of pressure.

, where f denotes the number of degrees of freedom.

K and η are connected by the relation

, where M is molecular weight of gas.

We know that the coefficient of viscosity η is given by

That the coefficient of thermal conductivity K is given by K =

For a diatomic gas,

The coefficient of diffusion D is given as D =

Phase space and Gibbs postulates and Density of state

Phase curve any between positions coordinate along horizontal axis and conjugate momentum along vertical axis for given value of energy is known as phase curve.

g (E) is known as Density of state

Density of State in three dimension

where V is volume of container

which is equation of sphere with coordinate px, py, pz.

is volume of sphere with radius

where ∅(E) volume of spherical shell between radius

where V is volume of three dimensional space.

Density of State in Two Dimension

where A is volume of container

which is equation of circle with coordinate px , py

is area of circle with radius

where ∅(E) volume of spherical shell between radius

, where A is area of the two dimensional space.

Density of State in One Dimension

where A is volume of container

where L is area of the one dimensional space