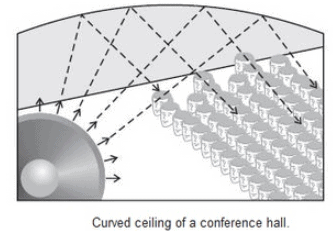 The ceilings of concert halls are made curved so that sound, after reflection from the ceiling, reaches all part of the hall.Solution 56 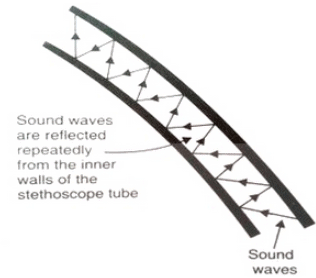 so time taken for sound to reach the reflecting surface, t = 5/2 s

Solution 61We can hear original sound and reflected sound separately only if there is a time interval of at least 0.1 sec between them.So, time taken to listen to echo = 0.1 sTime taken for sound to reach the reflecting surface,

Solution 64(a) Ultrasounds are the sounds having very high frequency which cannot be heard by human beings.

(b)Applications of ultrasound are:1. Ultrasound is used in industry for detecting flaws in metal blocks without damaging them2. In hospitals, ultrasounds are used to investigate the internal organs of the human body such as liver, kidneys, uterus, etc3. Ultrasounds are also used to monitor the growth of fetus inside the mother’s uterus.

Solution 66(a)(a) Echolocation is the method used by some animals to locate the objects by hearing the echoes of their ultrasonic squeaks.(b) Echocardiography is the use of ultrasound waves to investigate the action of the heart.(c) Ultrasonography is the technique of obtaining pictures of internal organs of the body by using echoes of ultrasound pulses.(b) Bat navigates and finds its food by echolocation.(c) Porpoise produces ultrasonic waves.Solution 67(a) SONAR stands for SOund Navigation And Ranging. A sonar is an apparatus (or device) which is used to find the depth of a sea or to locate the underwater things like shoals of fish, shipwrecks and enemy submarines.(b) Time taken to listen to the return signal = 3 s 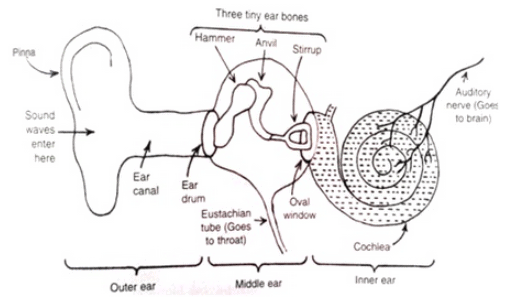 Construction of human ear:The ear consists of three compartments: outer ear, middle ear and inner ear. The outer ear consists of broad part called pinna and about 2 to 3 centimeters long passage called ear canal. At the end of ear canal is a thin, elastic, circular membrane called tympanum or ear-drum. The middle ear contains three small delicate bones called hammer, anvil and stirrup. These bones are linked to one another. The one end of hammer is touching the ear drum and its other end is connected to the second bone called anvil. The other end of anvil is connected to the third bone called stirrup. And the free end of stirrup is held against the membrane over the oval window of the inner ear. The lower part of middle ear has Eustachian tube going to the throat. The inner ear has a coiled structure called cochlea. The cochlea is filled with liquid containing sound sensitive nerve cells. The other side of cochlea is connected to the auditory nerve which goes to the brain.Working of human ear:The sound waves are collected by the pinna. These sound waves pass through ear canal and fall on the ear-drum. Sound waves consist of compressions and rarefactions. When the compression strikes the ear drum, the pressure on the outside of ear drum increases and pushes the ear drum inwards. And when rarefaction strikes the ear drum, the pressure on the outside of ear drum decreases and it moves outwards. Thus, when sound waves fall on the ear drum, it vibrates back and forth rapidly. These vibrations are passed onto the three bones in the middle ear and finally to the liquid in the cochlea. Due to this, liquid in the cochlea starts to vibrate, setting up electrical impulses in the nerve cells present in it. These impulses are carried to the brain by auditory nerve. The brain interprets the impulses and we get the sensation of hearing. 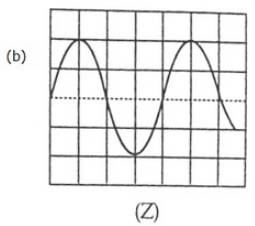