Case–ILaminar flow in a pipe

(c). The shear force, τ × 2πr∆x on the surface of the fluid element. As there is no acceleration hence:

As ∂P/∂x across a section is constant, thus the shear stress τ varies linearly with the radius r as shown in the Figure.

Shear stress and velocity distribution in laminar flow through a pipe 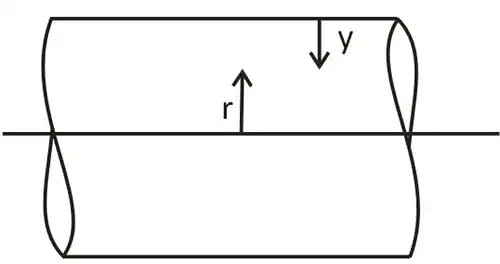 Pressure variation in Laminar flow through a pipe over length L

On integrating the above equation on both sides:

Head loss in Laminar flow through a pipe over length L

Above equation is hagen poiseuille equation.As we know, 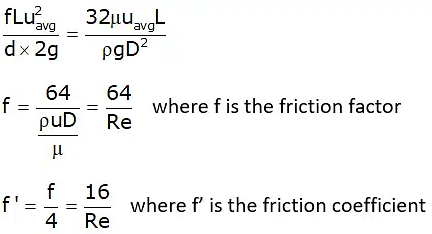 For steady and uniform flow, there is no acceleration and hence the resultant force in the direction of flow is zero.∂τ/∂y = ∂P/∂x

Velocity Distribution (u):the value of shear stress is given by:

Thus, velocity varies parabolically as we move in y-direction as shown in Figure.

There are two correction factors: 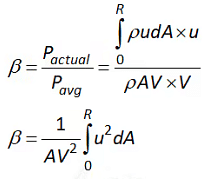 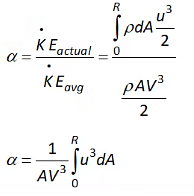 For flow through pipes values of α and β:

In case of turbulent flow there is huge order intermission fluid particles and due to this, various properties of the fluid are going to change with space and time.

Reynolds Expression for Turbulent Shear Stress.Reynolds developed an expression for turbulent shear stress between two layers of a fluid at a small distance apart, which is given as:τ = ρu'v'where u’, v’ = fluctuating component of velocity in the direction of x and y due to turbulence.  As u’ and v’ are varying and hence τ will also vary.Hence to find the shear stress, the time average on both sides of the equation

The turbulent shear stress given by the above equation is known as Reynold stress. 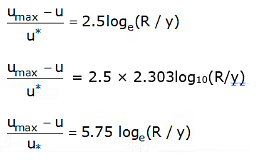 In the above equation, the difference between the maximum velocity umax, and local velocity u at any point i.e. (umax - u) is known as ‘velocity defect’.

Velocity distribution in turbulent flow through a pipe