The document Laplace Transform (Part - 2)- Mathematical Methods of Physics, UGC - NET Physics Physics Notes | EduRev is a part of the Physics Course Physics for IIT JAM, UGC - NET, CSIR NET.
All you need of Physics at this link: Physics

The following table provides Laplace transforms for many common functions of a single variable. For definitions and explanations, see the Explanatory Notes at the end of the table.Because the Laplace transform is a linear operator:

Using this linearity, and various trigonometric, hyperbolic, and complex number (etc.) properties and/or identities, some Laplace transforms can be obtained from others quicker than by using the definition directly.The unilateral Laplace transform takes as input a function whose time domain is the non-negative reals, which is why all of the time domain functions in the table below are multiples of the Heaviside step function, u(t). The entries of the table that involve a time delay τ are required to be causal (meaning that τ > 0). A causal system is a system where the impulse response h(t) is zero for all time t prior to t = 0. In general, the region of convergence for causal systems is not the same as that of anticausal systems. 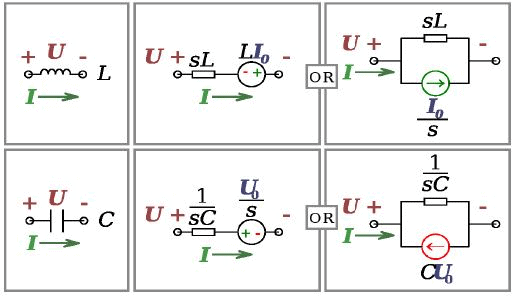 Note that the resistor is exactly the same in the time domain and the s-Domain. The sources are put in if there are initial conditions on the circuit elements. For example, if a capacitor has an initial voltage across it, or if the inductor has an initial current through it, the sources inserted in the s-Domain account for that.The equivalents for current and voltage sources are simply derived from the transformations in the table above.

Examples: How to apply the properties and theorems

The Laplace transform is used frequently in engineering and physics; the output of a linear time invariant system can be calculated by convolving its unit impulse response with the input signal. Performing this calculation in Laplace space turns the convolution into a multiplication; the latter being easier to solve because of its algebraic form. For more information, see control theory.

In nuclear physics, the following fundamental relationship governs radioactive decay: the number of radioactive atoms N in a sample of a radioactive isotope decays at a rate proportional to N. This leads to the first order linear differential equation

where λ is the decay constant. The Laplace transform can be used to solve this equation.Rearranging the equation to one side, we have

Next, we take the Laplace transform of both sides of the equation:

Finally, we take the inverse Laplace transform to find the general solution

which is indeed the correct form for radioactive decay.

Example 2: Deriving the complex impedance for a capacitor

In the theory of electrical circuits, the current flow in a capacitor is proportional to the capacitance and rate of change in the electrical potential (in SI units). Symbolically, this is expressed by the differential equation

Solving for V(s) we have

Using this definition and the previous equation, we find:

which is the correct expression for the complex impedance of a capacitor.

The impulse response is simply the inverse Laplace transform of this transfer function:

To evaluate this inverse transform, we begin by expanding H(s) using the method of partial fraction expansion:

The unknown constants P and R are the residues located at the corresponding poles of the transfer function. Each residue represents the relative contribution of that singularity to the transfer function's overall shape. By the residue theorem, the inverse Laplace transform depends only upon the poles and their residues. To find the residue P, we multiply both sides of the equation by s + α to get

Then by letting s = −α, the contribution from R vanishes and all that is left is

Similarly, the residue R is given by

Finally, using the linearity property and the known transform for exponential decay (see Item #3 in the Table of Laplace Transforms, above), we can take the inverse Laplace transform of H(s) to obtain:

which is the impulse response of the system.

The same result can be achieved using the convolution property as if the system is a series of filters with transfer functions of 1/(s+a) and 1/(s+b). That is, the inverse of

Starting with the Laplace transform

we find the inverse transform by first adding and subtracting the same constant α to the numerator:

By the shift-in-frequency property, we have

Finally, using the Laplace transforms for sine and cosine (see the table, above), we have

Starting with the Laplace transform,

we find the inverse by first rearranging terms in the fraction:

We are now able to take the inverse Laplace transform of our terms:

This is just the sine of the sum of the arguments, yielding:

We can apply similar logic to find that

The wide and general applicability of the Laplace transform and its inverse is illustrated by an application in astronomy which provides some information on the spatial distribution of matter of an astronomical source of radiofrequency thermal radiation too distant to resolve as more than a point, given its flux density spectrum, rather than relating the time domain with the spectrum (frequency domain).Assuming certain properties of the object, e.g. spherical shape and constant temperature, calculations based on carrying out an inverse Laplace transformation on the spectrum of the object can produce the only possible model of the distribution of matter in it (density as a function of distance from the center) consistent with the spectrum. When independent information on the structure of an object is available, the inverse Laplace transform method has been found to be in good agreement.