Definition of Laplace Transform
Consider a function f(t). The Laplace transform of the function is represented by f(s) and defined by the following expression:

Hence, the Laplace Transform is a transformation of a function from the t -domain (time domain) to s -domain (Laplace domain) where both t and s are independent variables.

has a finite value, i.e. , it remains bounded; eg . if f(t) = eat, then f(s) exists only for s>a, as the integral becomes unbounded for s<a.
•  Laplace Transform is a linear operation.

The Fig.1 shows a few basic functions which are frequently used in process control applications 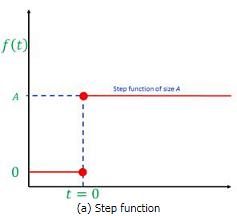 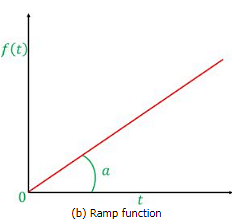 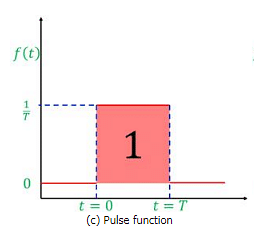 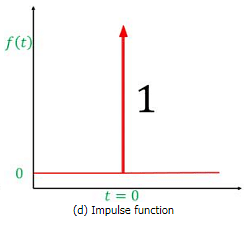 Ramp function : See Fig. 1(b) for the schematic of a ramp function f(t)=at for t>0 where a is a constant

for t>0 where a is a constant

Pulse function : See Fig. 1(c) for the schematic of an unit pulse function. The area under the pulse is 1. The duration of pulse is T and hence it achieves maximum intensity of 1/T. Thus the
Function is defined by

It can also be defined as the “addition” of two step functions which are equal but with opposite intensity, however, the second function is delayed by T .

Hence, it is evident that f2(t) is equal to -f1(t) in intensity however it is delayed by time T.

. Since f1(t) is a step function of intensity 1/T, the following expression will hold.

Impulse function : See Fig. 1(d) for the schematic of an unit impulse function. This is analogous to a pulse function whose duration is shrinked to zero without losing the strength. Hence the area under the impulse remains 1. The function can be expressed as the following:

As the duration of the impulse tends to zero, its maximum intensity ideally tends to ∞. Mathematically it is termed as Dirac Delta function and is represented as

Thus the Laplace transform of the impulse function can be derived as the following:

L'Hospital's rule has been applied in the above derivation. Hence, 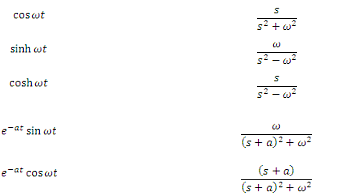