The document Law of Chemical Equilibrium and Equilibrium Constant Class 11 Notes | EduRev is a part of the Class 11 Course Chemistry for JEE.
All you need of Class 11 at this link: Class 11

At a given temperature, the product of concentrations of the reaction products raised to the respective stoichiometric coefficient in the balanced chemical equation divided by the product of concentrations of the reactants raised to their individual stoichiometric coefficients has a constant value. This is known as the equilibrium Law or Law of Chemical Equilibrium

Relation between Kp and Kc

The size of the equilibrium constant can give us information about the relative amounts of reactants and products present at equilibrium.

• When K << 1The reaction lies to the left (mostly reactants)

• When K >> 1The reaction lies to the right (mostly products)

This expression can be rearranged into standard polynomial formx2 0041x-0.00054=0 and solved by the quadratic formula, but we will simply obtain an approximate solution by iteration.Because the equilibrium constant is small, we know that x will be rather small compared to 0.124, so the above relation can be approximated by

which gives x=0.025. To see how good this is, substitute this value of x into the denominator of the original equation and solve again:

At each point in a reaction, we can write a ratio of concentration terms having the same forms as the equilibrium constant expression. The ratio is called the reaction quotient denoted by symbol Q. It helps in predicting the direction of a reaction. 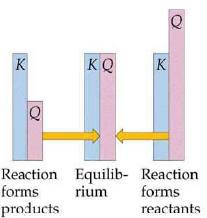 (i) if Q > KC reaction will proceed in a bakward direction until equilibrium in reached.

(ii) if Q < KC reaction will proceed in forward direction until equilibrium is established.

(iii) if Q = KC reaction is at equilibrium

Hence, reaction will shift in backward direction, Therefor Br2 will be consumed

Ex. The Vapour Density of mixture of PCl5, PCl3 and Cl2 is 92. Find the degree of dissociation of PCl5.

After reversing the reaction

After reversing the reaction the equilibrium constant get reversed.

when the two reaction are added there equilibrium constant get multiplied.

After multiplying by n

When the reaction is multiplied by any number then eq. constant gets the same number in its power.

Ex. Given the following equilibrium constants:

Comment: This net reaction describes the dissolution of limestone by acid; it is responsible for the eroding

effect of acid rain on buildings and statues. This is an example of a reaction that has practically no tendency to take place by itself (the dissolution of calcium carbonate) begin "driven" by a second reaction having a large equilibrium constant. From the standpoint of the LeChâtelier principle, the first reaction is "pulled to the right" by the removal of carbonate by the hydrogen ion. "Coupled" reactions of this type are widely encountered in all areas of chemistry, and especially in biochemistry, in which a dozen or so reactions may be linked in this way.

Ex. The synthesis of HBr from hydrogen and liquid bromine has an equilibrium constant Kp = 4.5×1015 at 25°C. Given that the vapor pressure of liquid bromine is 0.28 atm, find Kp for the homogeneous gas-phase reaction at the same temperature.

Sol: The net reaction we seek is the sum of the heterogeneous synthesis and the reverse of the vaporization of liquid bromine:

Here are some of the possibilities for the reaction involving the equilibrium between gaseous water and its elements: