Market demand is defined as the sum of individual demands for a product at a price per unit of time. In other words, it is the total quantity that all consumers of a commodity are willing to buy per unit of time at a given price, all other things remaining constant. When we add up the various quantities demanded by different consumers in the market, we can obtain the market demand schedule. How the summation is done is illustrated in Table 2. Suppose there are only three individual buyers of the goods in the market namely, P,Q and R. The Table 2 shows their individual demands at various prices. Rationale of the Law of Demand

(1) Law of diminishing marginal utility: A consumer is in equilibrium (i.e. maximises his satisfaction) when the marginal utility of the commodity and its price equalize. According to Marshall, the consumer has diminishing utility for each additional unit of a commodity and therefore, he will be willing to pay only less for each additional unit. A rational consumer will not pay more for lesser satisfaction. He is induced to buy additional units only when the prices are lower. The operation of diminishing marginal utility and the act of the consumer to equalize the utility of the commodity with its price result in a downward sloping demand curve.(2) Price effect: The total fall in quantity demanded due to an increase in price is termed as Price effect. The law of demand can be dubbed as “Negative Price Effect” with some exceptions. The price effect manifests itself in the form of income effect and substitution effect

(3) Arrival of new consumers: When the price of a commodity falls, more consumers start buying it because some of those who could not afford to buy it earlier may now be able to buy it. This raises the number of consumers of a commodity at a lower price and hence the demand for the commodity in question.(4) Different uses: Certain commodities have multiple uses. If their prices fall, they will be used for varied purposes and therefore their demand for such commodities will increase. When the price of such commodities are high (or rises) they will be put to limited uses only. Thus, different uses of a commodity make the demand curve slope downwards reacting to changes in price. For example Olive oil can be used for cooking as well as for cosmetic purposes. So if the price of olive oil rises we can limit our usage and thus the demand will fall.

Exceptions to the Law of DemandAccording to the law of demand, other things being equal, more of a commodity will be demanded at lower prices than at higher prices,. The law of demand is valid in most cases; however there are certain cases where this law does not hold good. The following are the important exceptions to the law of demand.(i) Conspicuous goods: Articles of prestige value or snob appeal or articles of conspicuous consumption are demanded only by the rich people and these articles become more attractive if their prices go up. Such articles will not conform to the usual law of demand. This was found out by Veblen in his doctrine of “Conspicuous Consumption” and hence this effect is called Veblen effect or prestige goods effect. Veblen effect takes place as some consumers measure the utility of a commodity by its price i.e., if the commodity is expensive they think that it has got more utility. As such, they buy less of this commodity at low price and more of it at high price. Diamonds are often given as an example of this case. Higher the price of diamonds, higher is the prestige value attached to them and hence higher is the demand for them.(ii) Giffen goods: Sir Robert Giffen, a Scottish economist and statistician, was surprised to find out that as the price of bread increased, the British workers purchased more bread and not less of it. This was something against the law of demand. Why did this happen? The reason given for this is that when the price of bread went up, it caused such a large decline in the purchasing power of the poor people that they were forced to cut down the consumption of meat and other more expensive foods. Since bread, even when its price was higher than before, was still the cheapest food article, people consumed more of it and not less when its price went up .Such goods which exhibit direct price-demand relationship are called ‘Giffen goods’. Generally those goods which are inferior, with no close substitutes easily available and which occupy a substantial place in consumer’s budget are called ‘Giffen goods’. All Giffen goods are inferior goods; but all inferior goods are not Giffen goods. Inferior goods ought to have a close substitute. Moreover, the concept of inferior goods is related to the income of the consumer i.e. the quantity demanded of an inferior good falls as income rises, price remaining constant as against the concept of giffen goods which is related to the price of the product itself. Examples of Giffen goods are coarse grains like bajra, low quality rice and wheat etc.(iii) Conspicuous necessities: The demand for certain goods is affected by the demonstration effect of the consumption pattern of a social group to which an individual belongs. These goods, due to their constant usage, become necessities of life. For example, in spite of the fact that the prices of television sets, refrigerators, coolers, cooking gas etc. have been continuously rising, their demand does not show any tendency to fall.(iv) Future expectations about prices: It has been observed that when the prices are rising, households expecting that the prices in the future will be still higher, tend to buy larger quantities of such commodities. For example, when there is wide-spread drought, people expect that prices of food grains would rise in future. They demand greater quantities of food grains as their price rise. However, it is to be noted that here it is not the law of demand which is invalidated but there is a change in one of the factors which was held constant while deriving the law of demand, namely change in the price expectations of the people.(v) The law has been derived assuming consumers to be rational and knowledgeable about marketconditions. However, at times, consumers tend to be irrational and make impulsive purchases without any rational calculations about the price and usefulness of the product and in such contexts the law of demand fails.(vi) Demand for necessaries: The law of demand does not apply much in the case of necessaries of life. Irrespective of price changes, people have to consume the minimum quantities of necessary commodities.Similarly, in practice, a household may demand larger quantity of a commodity even at a higher price because it may be ignorant of the ruling price of the commodity. Under such circumstances, the law will not remain valid. For example Food, power, water, gas.(vii) Speculative goods: In the speculative market, particularly in the market for stocks and shares, more will be demanded when the prices are rising and less will be demanded when prices decline.The law of demand will also fail if there is any significant change in other factors on which demand of a commodity depends. If there is a change in income of the household, or in prices of the related commodities or in tastes and fashion etc., the inverse demand and price relation may not hold good. 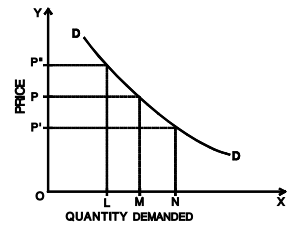 Fig. 3 : Expansion and Contraction of Demand INCREASE AND DECREASE IN DEMANDTill now we have assumed that other determinants of demand remain constant when we are analysing demand for a commodity. It should be noted that expansion and contraction of demand take place as a result of changes in the price while all other determinants of price viz. income, tastes, propensity to consume and price of related goods remain constant. The ‘other factors remaining constant’ means that the position of the demand curve remains the same and the consumer moves downwards or upwards on it. What happens if there is a change in consumers’ tastes and preferences, income, the prices of the related goods or other factors on which demand depends? Let us consider the demand for commodity X:Table 3 shows the possible effect of an increase in income of the consumer on the quantity demanded of commodity X. Fig. 5(a): Rightward shift in the demand curve Fig. 5(b): Leftward shift in the demand curve

MOVEMENTS ALONG THE DEMAND CURVE VS. SHIFT OF DEMAND CURVEIt is important for the business decision-makers to understand the distinction between a movement along a demand curve and a shift of the whole demand curve.A movement along the demand curve indicates changes in the quantity demanded because of price changes, other factors remaining constant. A shift of the demand curve indicates that there is a change in demand at each possible price because one or more other factors, such as incomes, tastes or the price of some other goods, have changed.Thus, when an economist speaks of an increase or a decrease in demand, he refers to a shift of the whole curve because one or more of the factors which were assumed to remain constant earlier have changed. When the economists speak of change in quantity demanded he means movement along the same curve (i.e., expansion or contraction of demand) which has happened due to fall or rise in price of the commodity.In short ‘change in demand’ represents shift of the demand curve to right or left resulting from changes in factors such as income, tastes, prices of other goods etc. and ‘change in quantity demanded’ represents movement upwards or downwards on the same demand curve resulting from a change in the price of the commodity.When demand increases due to factors other than price, firms can sell more at the existing prices resulting in increased revenue. The objective of advertisement and all other sales promotion activities by any firm is to shift the demand curve to the right and to reduce the elasticity of demand. (The latter will be discussed in the next section). However, the additional demand is not free of cost as firms have to incur expenditure on advertisement and sales promotion devices.